Almost a year ago, China was trying to kill Indian rice exports to Africa by lowering the price of its exports to African nations. “We are aware that China, hitherto a buyer (of rice), is increasing its export of white rice at a very competitive price. But let’s see how the situation develops in terms of overall volume of exports,” said the Commerce Ministry in January last year.

In just one year, the situation has changed radically as not only India has become an exporter to Africa, but China, is itself purchasing Indian rice. The shipment of food grains doubled in the last year, from 1.63 billion dollars between January to April 2019-20 to 3.51 billion dollars in the same period in this fiscal year. 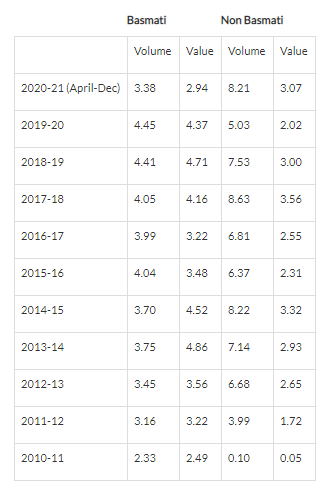 The export of Basmati rice declined compared to last fiscal year because the consumer around the world got poorer due to the Coronavirus pandemic’s impact on the economy, but, at the same time, countries around the world started building food reserves for emergency situations (like India does since decades), and this led to the growth in demand. Moreover, the weather has not been very supportive to many countries in the world and this has led to a decline in their production of rice and other grains, while in India, the production reached an all-time high in the last cropping season.

With the appreciation of the food prices in the global market, Indian agriculture is set to benefit if an uninterrupted supply of exports is maintained. “We took several measures in terms of ensuring safety and hygiene because of the operational and health challenges posed by Covid-19, while ensuring that rice exports continue uninterrupted,” said APEDA chairman M Angamuth.

In 2020, most of the countries around the world fell short of rice and India came forward to feed them. Countries like Vietnam and Thailand which traditionally have been powerhouses of rice exports are now bound to import the grain from India. And with this, the country has created a long-term market for its rice around the world. The African market, which China was trying to snatch from the Indian exporters, has become a long-term market for the country because in their tough times India came forward to feed them while China halted the exports all of a sudden.

Moreover, the Indian agriculture sector, which has been suffering from low commodity prices globally, will revive and the farmers of the country are all set to witness an exponential increase in their incomes. Indian traders have secured a contract to export 70,000 tonnes of rice to Vietnam, which is purchasing the Indian rice for the first time because the domestic prices have shot up to 500 dollars per tonne while India is exporting the same at the rate of 310 dollars per tonne.

After the pandemic, China suddenly halted the exports to African and West Asian countries while it started to increase its reserves, but India had so much reserve that it continued to export around the world and today almost every major rice-consuming country is eating Indian rice.

The price of rice has shot up around the world including Thailand which is the world’s second-largest exporter of the grain after India. Therefore, Indian produce has attracted countries like Vietnam, China, and Bangladesh, where the consumers are more concerned about the rising prices.

India is the world’s largest producer as well as exporter of rice. In 2019, India exported rice worth 7.1 billion dollars, accounting for 32 per cent of the global rice export. It was followed by Thailand, the United States, Vietnam, Pakistan, China, and Italy. Yet in 2020, the price of rice in countries like Vietnam and China reached so high that even these countries started importing rice from India.

YUVAK scheme that allows engineering students to learn the engineering