Tanzila Anis is just one of the many Hindu haters who have caught the public eye for their derogatory, vile and outrageous remarks about Hindu deities and devotees. Tanzila Anis, who is a content head at the online music streaming platform – Gaana, took to displaying her bigotry by cheering Rinku Sharma’s cold-blooded murder. Rinku Sharma – the Bajrang Dal activist who was murdered by an Islamist mob in front of his house for merely chanting Jai Shree Ram and being involved in a donation drive to shore up funds for the grand Ram Mandir was subjected to stabbing by jihadis on Thursday.

At a time when the religiously-motivated murder of Rinku Sharma has shocked Hindus, the content head of Gaana took to validating the killing of the Bajrang Dal activist, subtly stating that he deserved to die due to his affiliation. “That’s it, that’s the tweet,” said Tanzila Anis. From her tweet, it was made abundantly clear that she was indirectly defending the killing of a Bajrang Dal activist by her co-religionists, merely for participating in a donation drive for the construction of the Ram Mandir.

With this tweet, the pandoras box called Tanzila Anis was soon opened on Twitter, and it was seen that the woman has always been a Hindu-hater, who on more occasions than one can recount, has passed abominably lewd remarks for Hindu gods. Shri Krishna, Bhagwan Shiva and Hanuman were all mentioned in multiple tweets of the lady. The commonality you may ask? All her anti-Hindu tweets are sexual and incestuous in nature, in line with larger character traits of Islamists. In fact, Tanzila Anis, in a now deleted tweet from 2017 had boastfully claimed that she would definitely indulge in sexual intercourse with her own brother, if he looked like star-footballer Neymar.

And they say we are obsessed. Lel. pic.twitter.com/YcoqZvfBeN

Tanzila Anis supported a murder and Twitter was OK with it. I tweeted a news link of an article written by @PrinceArihan and they sent me a warning. FOE is simply a one way street. Wow !! #HindusLivesMatter pic.twitter.com/3iLry49t0G 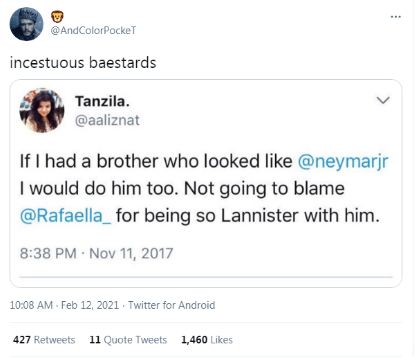 Tanzila Anis is followed by several leading lights of the Congress ecosystem.

Meanwhile, users have begun uninstalling the Gaana app, due to the music-app and its parent Times Group not taking any action against Tanzila Anis despite all the proof being available on social media. In a statement released on Friday, Gaana said, “We do not endorse the beliefs & views of our employees in their personal capacity. Gaana respects religious sentiments of every community in India. We have been apprised of the issue & will take necessary steps at the earliest based on our enquiries.”

We do not endorse the beliefs & views of our employees in their personal capacity. Gaana respects religious sentiments of every community in India.

We have been apprised of the issue & will take necessary steps at the earliest based on our enquiries.

To her flimsy defence, Tanzila Anis, in fear of being sacked by her employers, has defended her tweet by saying that she did not even know that a Bajrang Dal activist had been murdered and her tweet only alluded to the fact that members of the “extremist” organisation cannot be called ‘activists’. Visibly, such excuses have convinced nobody, and people continue to uninstall the Gaana app, while exposing Anis and her cult.