Azerbaijan and Armenia are inching closer to a long and bloody war. Interestingly, they are fighting over a small piece of territory Nagorno-Karabakh, which is merely four times the size of India’s Capital city- Delhi. South Caucasus is itself an insignificant part of the world in terms of size and, therefore, a war between Azerbaijan and Armenia shouldn’t by itself have any major repercussions on the world at large.

However, the Azerbaijan-Armenia war is showing signs of becoming a wider war with outside powers like France, Russia and Turkey getting involved. So, why do these powers care about a geographically small region fighting over a still smaller territory? This is where the strategic role of South Caucasus comes into the picture. South Caucasus sits at the international crossroads in more ways than one. South Caucasus is a major connectivity hub, and Nagorno Karabakh itself is a crucial oil supply route.

Be that as it may, skirmishes between Armenia and Azerbaijan, and that too in Nagorno-Karabakh hurt Europe’s energy transport ambitions. Two pipelines carry oil and gas from Azerbaijan westward through the Caucasus into Europe. But both of them pass near the disputed Nagorno-Karabakh region. A broadened war in South Caucasus could therefore jeopardise Europe’s ambitions of tapping the Caspian region for oil and gas supplies. 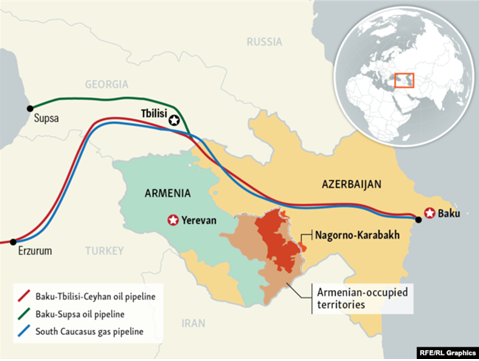 Since Europe finds it convenient to view Russia as an enemy of the free world, it wants to reduce dependence on Russia for oil and energy supplies. Therefore, the Nagorno-Karabakh region getting caught up in hostilities is a major geostrategic disaster for Europe.

But oil and gas supplies are just one dimension of the strategic significance of the South Caucasus region. Since South Caucasus is truly at international crossroads, its ability to function as a connectivity hub of sorts has got enhanced. South Caucasus can help connect Asia to Europe, which brings in another power into the region- China. The location of South Caucasus countries like Azerbaijan makes the region indispensable in China’s Belt and Road Initiative (BRI) ambitions.

China understands that it cannot reach Europe unless it invests in South Caucasus. As a part of the BRI, China is developing a Trans-Caspian International Transit Route. One of the components of this route is the Baku-Tbilisi-Kars railway. This rail route currently serves as the shortest route for delivering Chinese goods to Turkey. This route that cuts through South Caucasus helps China reduce delivery time to Europe from over a month to just 15 days.

And then China also understands the significance of the oil and gas supply routes passing through the disputed Nagorno-Karabakh region. Chinese State media outlet CGTN has even reported, “Nagorno-Karabakh region is geopolitically important because it is a significant pipeline and energy gate towards Europe and other countries in the region.”

Beijing, therefore, seems to be evincing interest in harnessing the oil and gas reserves of the region and probably even playing a role in the pipeline projects that pass through Nagorno-Karabakh region.

Finally, for Russia and Turkey, Armenia and Azerbaijan are becoming important not only because of their geographical location but also because South Caucasus brings Islamist and orthodox Christianity at loggerheads.

For Ankara, the ongoing battle in the disputed Nagorno-Karabakh region also has a Central Asia link. Turkey lacks a direct link to Central Asia, a region, considered to be Russia’s sphere of influence, and the only roadblocks are Armenia and the Nagorno Karabakh Republic. Attacking Armenia and taking control of the Nagorno-Karabakh region is, therefore, a part of Erdoğan’s dreams to unite the Turkic world from Central Asia to Turkey under Ankara’s leadership.

On the other hand, Putin cannot simply give away Central Asia access to Turkey because Central Asia is a priority region for Moscow. Therefore, even though Russia might not itself is tempted to choose between two former Soviet Republics, but, every time Turkey backs Azerbaijan against Armenia, Moscow will be induced to back Armenia.

Therefore, South Caucasus might seem inconsequential due to its small size. But every time the region moves towards a full-blown war, it risks dragging several powers including Russia, Europe, China and Turkey into the conflict.

Imran Khan is now truly scared of a Saudi backed military coup in Pakistan, his anti-army statements prove that

Is Turkey about to be thrown out of NATO? There are some solid hints