By attacking Armenia, Turkey is falling in its own trap and Russia is set to teach it a lesson of a lifetime

Turkish President Recep Tayyip Erdoğan’s Islamist belligerence has now embarked on a suicidal course. Turkey has been abetting Azerbaijan towards an eventual war with Armenia over the three decades-old dispute in the South Caucasus region called  Nagorno-Karabakh. Ankara is sending in mercenaries and fighters to lead Azerbaijan into a brutal assault against Armenia, the only Russian ally in the region.

By abetting and physically leading Azerbaijan into inflicting casualties upon Armenia, Erdoğan is rubbing his Russian counterpart, Vladimir Putin the wrong way. Armenia is among Russia’s key allies. It is at the core of Moscow’s Central Asia and Caucasus strategy. As such the Kremlim is bound to defend Armenia given the orthodox Christian connect, Armenia’s member of the Russia-led Collective Security Treaty Organization (CSTO) and Moscow’s military interests in the Caucasian country.

In fact, what seemed to have started as an armed conflict between Azerbaijan and Armenia has now taken the shape of Turkish belligerence against Armenia. Armenia’s ambassador to Russia has gone as far as claiming that Ankara has sent 4,000 fighters from Northern Syria to Azerbaijan in a bid to support Baku’s aggression over the breakaway region of Nagorno-Karabakh.

Erdoğan has therefore found a new venue to assert his policy of Islamist expansionism by supporting an Islamic revivalist Azerbaijan against a predominantly Christian Armenia. Armenian Prime Minister Nikol Pashinyan too has sough support against Turkish belligerence.

Pashinyan tweeted, “I call on the international community to use all of its influence to halt any possible interference by Turkey, which will ultimately destabilize the situation in the region. This is fraught with the most devastating consequences for the South Caucasus and neighboring regions.”

I call on the international community to use all of its influence to halt any possible interference by Turkey, which will ultimately destabilize the situation in the region. This is fraught with the most devastating consequences for the South Caucasus and neighboring regions.

And Erdoğan isn’t even trying to hide how he is pushing the envelope in  Nagorno-Karabakh. In a speech in Istanbul, the Turkish President said,  “The time has come to end the crisis which started with the occupation of Nagorno-Karabakh.” He also said that international negotiations “failed to solve this problem for 30 years.”

Unsurprisingly, Yeravan has turned to Moscow for help amidst Turkish belligerence. He even telephoned Putin to discuss the recent hostilities in Nagorno-Karabakh that have led to as many as 16 separatist Armenian fighters getting killed. During the telephone call, Putin said, “It is important to make every effort to prevent further escalation in the confrontation; more importantly, there must be an end to hostilities.”

Armenia is clearly looking for Russian help against Turkish belligerence. And as such Moscow is unlikely to hold back. The fact remains that Armenia is a member of the Collective Security Treaty Organization (CSTO), a Russia-led military alliance that was formed in 2002. It is described as the Eurasian counterpart of NATO. Therefore, it world on the ‘one for all, all for one’ principle.

The CSTO assures support in deterring military aggression against any of the members by a third country. Therefore, if Armenia is attacked, Russia is bound to come in and ensure that Yerevan escapes unsacthed. CSTO has only six member-States and it is certainly not as big as NATO, but it does have two regional groups- Russia-Belarus and Russia-Armenia, designed to meet the challenges posed by external military aggression.

By attacking Armenia, Turkey has thus given Moscow the opportunity of activating CSTO and beating back Turkish mercenaries in the disputed region of  Nagorno-Karabakh. Even apart from CSTO, Moscow is bound to protect Armenia from a completely geopolitical point of view.

Armenia is Russia’s only ally in the strategically located Caucasus region. Armenia is a key ally on Russia’s left flank that the Kremlin values highly. Moscow will not let Turkey exploit such a major ally just like that. 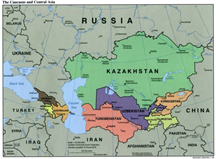 Moreover, Russia also wants to protect Central Asia from Turkish influence. If Turkey overpowers the Caucasus with belligerence against Armenia, Erdoğan will try to boost presence around Caucasus that lies just 150 miles away from the resource-rich Central Asian region, which Moscow considers its exclusive sphere of influence. Russia needs Armenia, as much as Armenia needs Russia.

Then Russia also has two military bases in Armenia. Moscow sells weapons to Armenia and guards it border with Turkey. Being an orthodox Christian country, Armenia also looks upon Russia as a protector that will save it from a genocidal Turkey.

Russia has been already beating Turkey black and blue. In February this year, Russia-backed forces killed 33 Turkish soldiers in Syria. In Libya too, Russia is unleashing its firepower on the Turkey-backed Muslim Brotherhood. And now it seems that Russian military firepower is going to weigh down Turkey in the South Caucasus region of Nagorno-Karabakh. Turkey is falling into its own trap, and Russia is going to punish it in all likelihood.

In 2016 Carlsberg had promised to transform Bihar. But Nitish Kumar stuck a dagger in its CEO’s back