by Mahima Kalra
in Geopolitics
0

Global supply chains are changing rapidly as the countries around the world are pushing for decoupling their economies from China. Most of the companies in developed countries, which till now used to manufacture goods in China, are now looking for other low-cost manufacturing destinations. So far, the ASEAN countries have been the biggest beneficiaries of the exit of companies from China as the majority of these are setting up their manufacturing units in these countries. Vietnam got the largest share of the pie, followed by Thailand, Cambodia, and Myanmar. 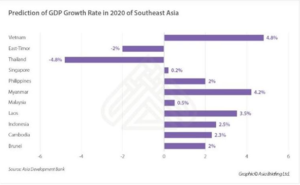 As per a study by Nomura Group on 56 companies shifting production out of China, only three of these relocated to India while 26 of them went to Vietnam, while 11 shifted to Taiwan, and eight to Thailand. Another study by Standard Chartered plc revealed that Vietnam remains the most favoured destination, followed by Cambodia, Myanmar, Bangladesh and Thailand.

Clearly, in every survey, ASEAN nations, especially those in mainland Southeast Asia ( Cambodia, Laos, Myanmar, Peninsular Malaysia, Thailand and Vietnam) remain the biggest beneficiaries of the global push against China.

Therefore, China remains a large market for all the companies which are shifting their manufacturing units to the ASEAN countries. If these countries irk China, Beijing might put various restrictions on imports from these companies, just like India has put on Chinese imports. This will eventually hinder the growth of these Southeast Asian countries as an export powerhouse, and therefore, these countries want to keep the Chinese Communist Party happy.

Apart from future prospects, even the existing trade relations are too valuable for the ASEAN countries to irk Chinese establishment. In the first half of 2020, when the world was grappling with Coronavirus disease and various restrictions were being put on a trade with China, Southeast Asia became the largest trading partner of China, overtaking the United States and the European Union.

China’s trade with countries around the world decreased significantly but with Southeast Asia, it increased by 6 per cent amid the pandemic and reached upto 140 billion dollars in the first quarter of 2020. China’s imports from Vietnam and Indonesia rose by 24 and 13 per cent year-on-year, respectively, highlighting the increasingly integrated supply chains between the two regions. China imported electronics products worth 15 billion dollars from Vietnam only. 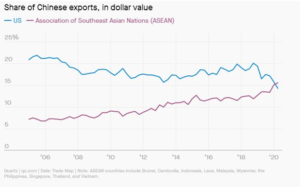 As of now, there is no alternative to the Chinese market which is five times bigger than India. New Delhi has a consumer base comparable to China, but purchasing power is five times lower, so the companies around the world are dependent on China to sell their goods. Therefore, the ASEAN nations see it beneficial to keep their mouth shut and silently lure the companies which are moving out of China.

Moreover, the Southeast Asian countries do not have military firepower to take on China. The political and economic influence of China is greater than that of the United States in Southeast Asia, as reported by the Centre for Strategic and International Studies (CSIS); although the Trump administration has started asserting American power in the region.

“The results of this survey paint a picture of clearly ascendant Chinese influence in Southeast Asia, complex and diverging views of China, and deep concerns over U.S.-China strategic competition and its impact on the Association of Southeast Asian Nations (ASEAN),” reads the CSIS report published in June this year.

Countries like Vietnam, which export goods worth billions of dollars every month to China, and are registering double digits in exports, would definitely refrain from irking Beijing. Lack of firepower to take on China militarily and dependency on the Chinese market for exports are the reasons behind the silence Southeast Asian countries, even though they are benefited most from the disruption in supply chains.

China started this year with dreams of global dominance. It can end the year by getting kicked out of the Dollar system

RN Ravi made the Naga insurgents dance to his tunes, trapped them. Now they want him out!