The Sterlite plant which used to produce almost 40 per cent of India’s total copper, and enabled India to become a net exporter of the essential metal, was closed in February 2018 due to the protests from China supported activists. It has been more than two years of the closure of the plant and India’s arch enemies, China and Pakistan, are benefiting.

In 2015, Daniel Bell, a professor at China’s Tsinghua University, published an article in the respected global magazine– Foreign Policy, titled– Is the Chinese model better than Democracy? The article was based on his book– The China Model: Political Meritocracy and the Limits of Democracy, which argued in favour of the Chinese model.

“If you have a small political community the issues are fairly easy to understand, and you know the moral character of the leaders you’re choosing, thus making a strong case for democracy at the lower level,” Bell explains.

These arguments of Bell can be contested on many grounds, but, in many cases it seems true, and the finest example of that is the closure of Sterlite Copper plant in India. 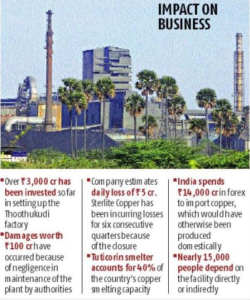 The owner of Sterlite Copper Plant, Anil Agrawal led Vedanta group has told the Madras High Court that the anti-Sterlite protest was funded by Chinese companies which will benefit from the closure of the plant. “These companies promoted and funded the agitations and protests against Sterlite. India’s import bill for copper is $2 billion, the demand was being met by Sterlite earlier,” claimed Aryama Sundaram, the legal counsel for Vedanta group before the special bench of the court comprising Justice T S Sivagnanam and Justice V Bhavani Subbaroyan.

Since the closure of Vedanta’s plant, 38 per cent of the country’s copper demand is being met through imports from foreign firms. “There is a direct economic, financial interest of the foreigners in this,” said Sundaram. “Foreign manufacturers are benefiting from this and the profit goes to them. The import bill for copper is $2 billion, which Sterlite used to satisfy earlier,” he further added.

As per a report published by China Economic Net, copper export from Pakistan to China has increased by around 400 per cent. Pakistan exported copper worth 550 million dollars in 2019, compared to 106 million dollars export in the year 2018.

The production capacity of Pakistan has increased, thanks to ‘Reko Diq project’, the disputed mining site in Balochistan, where the Chinese companies started production last year. Its copper became competitive in the international market due to the closure of Vedanta’s Sterlite Copper plant in Tamil Nadu.

Metallurgical Corporation of China (MCC) said that they would take the total exports to 10 billion dollars, once the mining site dispute settles down. Chinese officials also bragged that 87 per cent of the total employees of the project are local people. The Director of Administration Office, Song Guozhao, said, “By the end of February 2020, the project has a total of 1,977 employees, 256 Chinese and 1,721 Pakistani, of which the number of local employees accounts for 87% of the total.”

Evidently, China and Pakistan are benefitting from the closure of the Tamil Nadu-based plant which accounted for 40 per cent of Indian’s total copper production and more than half of total exports.

Majority of India’s copper exports went to China (75 per cent) and Taiwan (13 per cent). The closure of Sterlite’s plant benefitted Chinese companies which were earlier facing tough competition from Indian exports. Given the better quality of Indian products, Chinese consumers preferred Indian copper and this harmed the interest of the Chinese companies.

DMK MP from Thoothukudi district, Kanimozhi said, “The Madras High Court has refused to permit reopening of the Thoothukudi Sterlite plant. The verdict has made us realise that the growth we get by selling the environment is dangerous. The DMK welcomes this verdict. This is a victory people have secured after many giving up their lives also.”

“The DMK’s position has been that the plant should not be opened. That’s been our consistent position. This is a verdict thanks to the protests by people of Thoothukudi who have laid down their lives for this. This verdict highlights how important it is to protect the environment, the court has reiterated that. It is to be welcomed,” the MP told Tamil news channel News18.

The other political parties like CPM, MDMK, and VCK also supported the verdict and no single party stood for the opening of the plant that provided livelihood to thousands of the people in the state and contributed millions of dollars to Tamil Nadu’s tax collections.

Swarajya had earlier reported that the churches in the region had appealed to its members to support the Sterlite protest. The magazine had also reported that one of the mobs, comprising around 5,000 people, had gathered in front of one of the churches in the region before it proceeded to wreak havoc. The article goes on to claim that according to the Intelligence Bureau, there were Naxal elements among the protestors too and that the police had been tipped off about this.

The protests had found traction among many politicians in Tamil Nadu including Kamal Haasan. So, it seems that the nexus between the some Church elements, Naxals and the foreign companies, particularly the Chinese competitors of Vedanta, may have succeeded in hurting the economic interests of India, Tamil Nadu, and the poor people in the region due to the lacklustre attitude of the state government.

Given the fact what Chinese state did to Indian copper plant in Tamil Nadu with the help of non-governmental political players in the state, one can argue that the Chinese system is better than the democratic ones.

Canada’s economy is all set to survive recession