The truth must come out

by Abhinav Singh
in Cinema
0

Bollywood actor Sushant Singh Rajput was found dead in his Bandra flat on 14 June in the wee hours of the morning. Since his untimely death, the media and social media circuits have been abuzz with speculations over the cause of his death. The Mumbai Police has started an investigation to ascertain the cause of his death. Maharashtra home minister Anil Deshmukh citing Sushant’s autopsy report stated that it indeed was a suicide but with the allegations of professional rivalry swirling, the police was looking to investigate the aforementioned angle too.

And thus came out the Bollywood cartel from its burrows rattled by the Mumabi Police’s decision to investigate the matter thoroughly. Various reports have stated that because Sushant was an outsider in the industry, he was constantly pushed to the fringes of it. Some theories have suggested that Sushant had rippled up the Bollywood-mafias like Karan Johar, Salman Khan and production houses like Yash Raj Films.

First came a disgusting article on National Herald where it was mentioned that Mahesh Bhatt claimed that Sushant was a schizophrenic like Parveen Babi, which was parroted by his sibling Mukesh Bhatt. They even went on to say that Sushant Singh Rajput used to hear voices to further tarnish the image of a man who was an intellectual, visionary and a science buff apart from being an actor.

Bollywood is going all out to paint Sushant as a freak, as a loony who succumbed to his incurable mental issues but the truth is that he was slowly and steadily led by these monstrous Bollywood biggies to the edge. Now with an investigation creathing down their thorats, they are trying to absolve themselves from the guilt by painting him as a maniac.

Just have a go through with these tweets from the usual suspects of the industry. The star kids and their minions coming out to support one of ‘their own’ because that is how the abhorrent industry of Bollywood survives and thrives.

Stop appropriating a tragedy to further your agenda please!!!
Have some shred of dignity and humanity
Everything is not about you!!!!

Swara Bhasker also came out and started batting for the likes of Alia Bhatt and Karan Johar who Kangana Ranaut has described as the ‘flag-bearer’ of nepotism in the industry.

Parts of India Twitter blaming #KaranJohar and #AliaBhatt for the tragic suicide of Sushant – for some silly game played on a frivolous and pointless chat show (that All those people who are now abusing Bollywood nepotism lapped up) is both the height of idiocy and hypocrisy! 1/n

The video of Kangana Ranaut has ruffled numerous feathers in the industry who masquerade as good Samaritans but are vile creatures who do not want other than their kins to succeed.

The name of Salman Khan is also propping up as he had allegedly black-listed Sushant Singh Rajput from the industry much like he had done with Vivek Oberoi, Aishwarya Rai and Arijit Singh in the past. If these allegations are indeed true then no amount of charitable work can absolve Salman from his hand in the death of Sushant. 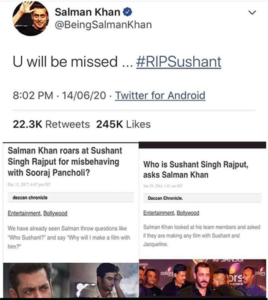 The inquiry by the Mumbai Police did not sit well with another vulture but this time from the Media industry, Rajdeep Sardesai who questioned Mumbai Police’s investigation and blamed it for falling privy to media gossips.

So Mumbai police will now investigate whether Bollywood rivalry led to Sushant Singh Rajput tragic suicide! This is what happens when govts watch too much social media. Let him rest in peace, his family mourn quietly without noise of twitter/insta wars! Good night, shubhratri.

Sardesai works in the same company whose sister channel Aaj Tak had run a highly insensitive ticker and an even blasphemous reporting on the death of Sushant. Meanwhile, the moment Rajdesai came up with the tweet, he got schooled by several police officers for his naive tweet.

What's logic of ur tweet @sardesairajdeep? Why blame govt or Mumbai Police? A person has died. Law mandates the cause of death to be ascertained.

With due regard, to rule out a foul play the enquiry has to take into account all aspects. Even possibility of abetment to suicide u/s 306 IPC.

Enquiry into death of Hindi movie actor has to involve Bollywood. You can't conduct it in his village or for that matter in Hollywood. https://t.co/ucREXdSMjB

As is the case with any unnatural death, the Police is laible to pursue every angle however absurd or dark the likes of Sardesai presume it to be. Rajdeep ‘schooled’ Sardesai has in the past been schooled by the likes of Amit Shah and Pranab Mukherjee too and it looks like he has not learned any lesson.

It is notable here that though many reports have stated that the young actor was suffering from depression, his family has alleged foul play in his death. Sushant’s brother-in-law who is a senior police officer in Haryana had alleged foul play and has sought a thorough investigation into the case. Therefore when you piece these tweets and articles together, it makes sense that  the A-listers are making desperate attempts to malign Sushant’s death by ridiculing his mental state whilst making sure that their ‘closed ones’ are safe from the police investigation.

‘Weakest PM Modi,’ Every time there is a Sino-India conflict, Congress refuses to take India’s side