WHO is now going out of its way to please China, shows Aksai Chin as part of China, J&K separate

Way to please its master

If you were of the opinion that the sorry excuse of an international health organization called WHO couldn’t any longer lie prostrate in front of China, we have news for you. As a matter of fact, despite being called out as an organization on the leash of China, the World Health Organization has not shied away from misrepresenting international borders in a brazen attempt to woo their masters in China. 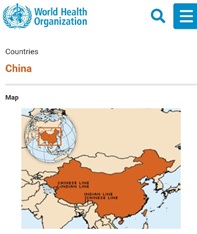 This time round, the WHO has messed up with India, and they are all in for receiving a grand whacking for their unpardonable trespass. The Economic Times has reported that the map of China on the WHO’s website shows Aksai Chin as a part of China, despite the region being a sovereign territory of India and currently being illegally occupied by a criminal country which has unleashed a deadly virus over humanity.

As is clearly visible, China’s territory has been depicted in an orange wash, and Aksai Chin is clearly a part of it. Meanwhile, the whole of Jammu & Kashmir has been portrayed in a grey wash. This includes the part of J&K currently under the control of India. PoK has been separated from Indian governed Kashmir with dotted lines.

This is a clear breakaway from even the norms of United Nations, which, for all practical purposes, shows only PoK as “disputed territory”. The WHO has gone a step further, and in its wisdom, declared the whole of Jammu and Kashmir as ‘disputed’. This, of course, apart from them showing Aksai Chin as a part of China.

Pakistan had ceded part of PoK to China in the 1960s. China occupies around 37,000 sq km in Ladakh, bordering its Xinjiang province. In 1950, China built, as part of a 1200 km long road project connecting Xinjiang province with Tibet, a 179 km road inside Indian territory of Aksai Chin. India, under the able leadership of Pandit Nehru, was not even aware of this development until 1957, when China published maps showing the same as their territory.

India, to this day, maintains that Aksai Chin is an indispensable territory sovereign to the Union of India. For the World Health Organization to cross all limits of decency only to please China is indeed a shame of a new order. Moreover, how they dared to show sovereign Indian ruled Jammu & Kashmir as a ‘disputed’ region is also something which must be probed. The Economic Times also reported that India had taken grave offence of the said development and raised concerns with authorities at the UN.

China is a childlike country which has a great fascination for maps, and anyone willing to toe their line when it comes to mapping their international boundaries almost immediately earns the goodwill of the CCP. The WHO seems to be doing the same, having been stripped off their funding by the USA.

The WHO has been under fire for their abject and explicit bias towards China, and also their brazen attempts at continuously whitewashing the country of its criminal negligence’s w.r.t to Coronavirus. Whether it be very confidently stating that there is no proof of “human-to-human” transmission of the virus, to saying that travel bans are a useless technique to try and curb the spread of the disease, the sold out organization has done it all. The WHO also published a 40-page report which was nothing but a memorandum of praises for the CCP’s handling of the virus, and how the world could inculcate knowledge from the same. When China recently doubled its death toll unceremoniously, after months of downplaying the impact of the pandemic on them, the WHO ran to their defence, saying such mishaps will be faced by all countries. What a load of bunkum.

Now that the WHO has been exposed fudging international borders, India must consider taking stringent action against the co-opted body, which should begin with us stripping them off our share of funds to the sham of an international body that they consider themselves.

‘We will lose our jobs and livelihood,’ Millions of Indian workers in the Gulf might go jobless after oil rout

The day USCIRF termed India “Anti-Muslim”, a country of 80% Hindus was crying for a Muslim

This election season, Chirag is the hot property. And now Tejashwi Yadav wants his support

Mukesh Sahani: Reason number 101 why BJP is in no mood to yield the CM chair to Nitish Kumar

Back in 1992, Joe Biden made sure that India does not get access to cryogenic tech for its space programme