The “Islamophobia” gang is back and this time they are targeting Bangalore South Lok Sabha MP, BJP leader Tejasvi Surya over a tweet from five years ago. Anti-Modi portals like Humans of Hindutva have gone on to concoct and attribute this five-year-old tweet that concerns the abhorrent practice of Female Genital Mutilation (FGM) that is rampant in the Middle East.

On March 22, 2015, noted author and activist Tarek Fatah had given an interview to leading news portal Swarajya, wherein he had spoken at length about how women’s rights are trampled in the Middle East. During this interview, Tarek Fatah had said, “Ninety-five percent of the Arab women have never had an orgasm in the last few hundred years! Every mother has produced kids as an act of sex and not love.” 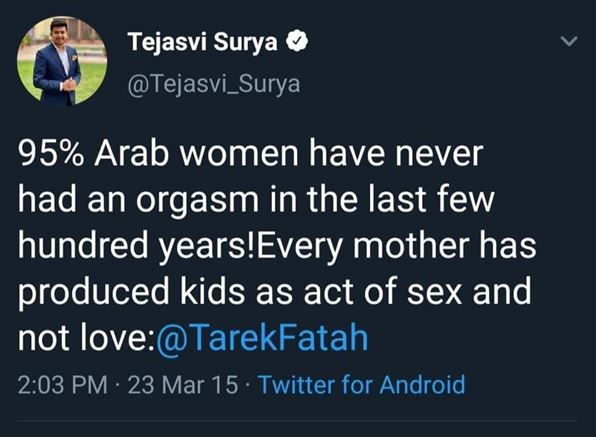 Tejasvi Surya had quoted Tarek Fatah as saying this in his tweet, without making any personal remarks but now the entire leftist ecosystem is misattributing this quote to Tejasvi Surya, and now a manufactured hashtag #Dismiss_Tejasvi_Surya is being trended against him.

And why do they want him to be dismissed? Because Tarek Fatah said something about the Middle East. In the left-liberal ecosystem, Tejasvi Surya should be dismissed for something that Tarej Fatah says. But they didn’t stop here, not only is the quote being misattributed to him, but the date of the tweet is also being fabricated.

Tejasvi Surya had tweeted this excerpt from Tarek Fatah’s interview on March 23, 2015- a day after Fatah was interviewed by Swarajya.

But the ecosystem has fabricated the time stamp and is passing around the tweet as if the BJP MP had posted it on April 19, 2020 in order to generate outrage against him. The liberal ecosystem must have thought who cares for a five-year-old tweet, so they started passing it around as if he had tweeted the quote only yesterday.

The attempts to tarnish the image of a Parliamentarian on the basis of misattributed quotes are ridiculous and obnoxious, but the real object of these Twitter trolls and the Congress-led ecosystem is to sidestep the sensitive issue of Female Genital Mutilation (FMG) in the Arab world.

The left ecosystem pages and social media handles may have shared the fabricated tweet, but they are not sharing the true context of the interview. After saying what the Bangalore South MP Surya quoted him as saying in the five-year-old tweet, Tarek Fatah had also said, “Women’s genitals have been cut for thousands of years. What sort of a society are you creating with only (Arabs) one category of people?”

The left-liberal ecosystem in India, as well as the Arab trolls who have been demanding the dismissal of Tejasvi Surya on Twitter found a brilliant opportunity in wrongly labelling the lawmaker as anti-women, and glossing over the issue of FMG- a practice that is common not only in the Arab world, but also among the Dawoodi Bohra community in India.

Prime Minister ..
An Indian Member of Parliament accuses Arab women, and we Arabs are asking for his membership to be dropped !!@narendramodi@PMOIndia pic.twitter.com/aQl4XayWZU

If you look at the quote closely, it doesn’t even mention Indian women or Muslims, but it only refers to the Arab world, and that brings us to the all-important question, viz. why should radical Islamist twitter handles and left-liberal portals in India be worried about a quote criticising the Middle East for trampling upon women’s rights? Why this blatant show of transnational loyalties and what happened to securalism and freedom of speech?

Ideally, an Indian Muslim should be least bothered about what is being said about the Arab world, and for twitter handles in India to rile up when Tarek Fatah speaks about injustice to Arab women, is an unabashedly disgusting show of Arab nationalism.

What is even more shocking is how the Congress-left ecosystem, including party spokesmen like Sanjay Jha, are tweeting in cohorts with the Arab trolls who are trying to pressure the Indian State into taking action against an Indian Member of Parliament.

The BJP gives tickets to Praggya Singh Thakur and #TejasviSurya etc because it helps popularise their hardline bigoted political profile.

Isn’t it a deep invasion in India’s sovereignty and internal matters that Arab twitter handles are demanding action against Tejasvi Surya, only because he quoted someone who spoke about gender injustice in the Middle East?

@PMOIndia Respected Prime minister @narendramodi India's relation with the Arab world has been that of mutual respect. Do you allow your parliamentarian to publicly humiliate our women? We expect your urgent punitive action against @Tejasvi_Surya for his disgraceful comment. pic.twitter.com/emymJrc5aU

Prime Minister ..
An Indian Member of Parliament accuses Arab women, and we Arabs are asking for his membership to be dropped !!@narendramodi@PMOIndia pic.twitter.com/aQl4XayWZU

Twitter handles who are collaborating closely with Arab trolls, like this AAP social media cell member, in bringing down an Indian Parliamentarian are actually using illegitimate foreign influence in order to alter political equations within India- a direct transgression of the independence of the Indian Parliament.

@PMOIndia Respected Prime minister @narendramodi India's relation with the Arab world has been that of mutual respect. Do you allow your parliamentarian to publicly humiliate our women? We expect your urgent punitive action against @Tejasvi_Surya for his disgraceful comment. pic.twitter.com/emymJrc5aU

Hatred speech against arab womens!! He must be arrested and dismissed from his MP's post..#Dismiss_Tejasvi_Surya #tejasvi_surya pic.twitter.com/QCIDxsqWEt

But why was this issue brought up suddenly after five years? Because the Islamist-leftist machinery knows how angry the entire country is about the Tablighi Jamaat fiasco. They have been trying to scapegoat the Modi government by peddling the narrative of India not taking care of its Muslims, albeit unsuccessfully.

Therefore, they brought up a new “Islamophobia” narrative, now tomorrow if there are many cases of Muslim COVID-19 cases due to the Nizamuddin Markaz incident, they will try to pin the entire blame on Modi government for not taking care of the Muslim population.

Tejasvi Surya never even said what is being attributed to him, nevertheless, we cannot bury the issue of Female Genital Mutilation (FMG)- an affront to the dignity of women and a gross violation of human rights, under the carpet.

Five years ago, Tarek Fatah had spoken about this serious issue and now Islamist bigots, instead of coming out clean on this issue, are actually scapegoating an Indian Member of Parliament. If you look at it objectively, it is not Tejasvi Surya or even Tarek Fatah, but the bigots targeting the lawmaker, who are the real misogynists.

The blaze before the dragon: Xi Jinping has received the verdict from the heavens