Effect of lockdown: The curve started flattening in India from April 6 itself, say scholars from IMSc Chennai

As Modi government mulls extending the lockdown for the next few weeks and Prime Minister Modi gets all set to address the nation at 10 AM on Tuesday over the matter, scholars from Chennai’s Institute of Mathematical Sciences (IMSc) have observed a slight but noticeable flattening of the curve in Coronavirus cases in India.

Analysis of the disease data by Soumya Easwaran and Sitabhra Sinha shows that since the outbreak of disease, every patient was infecting 1.83 persons on average but between April 6 and April 11, the infection rate reduced to 1.55, reported The Indian Express.

Sinha said the drop in infection rate is probably due to lockdown. “It is still too early to say this for sure, but it is possible that this reduction in the growth rate of the disease is the result of the lockdown,” he said. 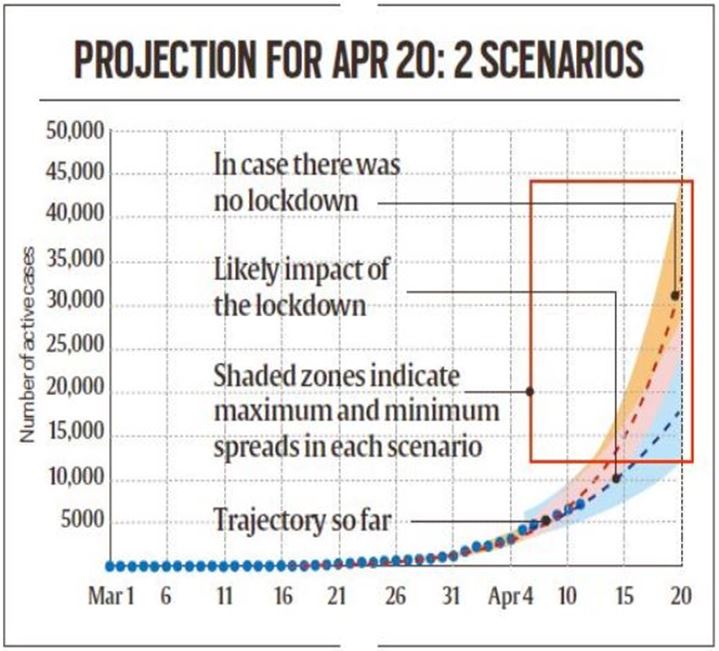 “The growth curve for Maharashtra appeared to be bending a little (showing signs of a slowdown) around April 6, but now we can see that it was a minor blip. The state with the largest number of cases is still experiencing an exponential growth of cases,” he added.

According to Sinha, the total number of cases in India might have doubled if the 21 days nationwide lockdown had not been announced. As of today, India has more than 9,000 cases with 300 deaths, and expected to reach 20,000 by April 20, as per Sinha’s team. His team told The Indian Express that the number could have been above 35,000 but for lockdown.

The slowdown in the infection rate means the total number of new cases will come down significantly in the next few days. The Modi government might extend the lockdown as almost every study has reported that the lockdown has been very effective in combatting the coronavirus outbreak in India.

“Positivity rate can give you a sense of how widespread the disease is, assuming that a substantial number of people are being tested. We’ve now reached roughly 16,000 to 17,000 tests per day, which is pretty good. But we need to see where it stabilises on an average. If we are testing more and the positivity rate remains the same, it’s a clue that the infection is where it was, and is not expanding per se. If you see that it suddenly goes up, that’s something that could be worrisome,” said Tarun Bhatnagar, a scientist at ICMR and National Institute of Epidemiology, Chennai.

India is testing only the people with severe symptoms and in spite of that, the positivity rate of 4 per cent is big wonder for the scientists around the world and international media.

It is yet to be figured out what has provided majority of Indians immunity from Coronavirus while the mighty west, with its entire first-grade medical infrastructure, simply buckled due to disease. Is it universal BCG immunization, is it hot weather, is it early lockdown, or is it something unique to Indian gene, or all of this combined is the reason behind low impact of Corona on Indians, especially the Hindu majority, is yet to be researched.

Flattening the curve was most important given our limited capacity in medical infrastructure. Because, if the large number of case have started coming out, the medical system was simply going to collapse. But with lockdown, the country not just reduced the number of cases, but also bought time to prepare the medical infrastructure. As health secretary, Luv Agrawal, informed yesterday, India is now ‘over prepared’ to deal with any significant outbreak.

Muslims dead due to Coronavirus will be cremated, not buried: Sri Lanka takes a bold decision

‘Thuggish attempt by Yogi,’ Liberal cabal fumes after The Wire’s Siddharth Varadarajan gets pulled up for fake news