No Result
View All Result
Newswire
Ammonia in Delhi water can damage internal organs, warn doctors 60 mins ago
Elli AvrRam turns a flying witch riding the stick on Halloween 60 mins ago
Kriti Sanon is a work in progress 1 hour ago
Writing is addiction that leaves your bank account empty: Stephen Alter 1 hour ago
Sean Connery dies at 90: Global celebs pay tributes 1 hour ago
Carry out corona prosecutions in crowded places: Delhi CP to cops 1 hour ago
Next
Prev

As the 3rd and 4th largest economies enter negative growth territory, India’s race to the top gets a booster

India remains the brightest spot for the global economy

The International Monetary Fund-the global lender has published its flagship biannual survey – World Economic Outlook yesterday. This is the third report under the Indian American IMF chief economist- Gita Gopinath, who was appointed last year. The document forecasts global and national economic growth in near and medium context. The document is generally published in the month of October and March and policymakers in more than 180 countries eagerly wait for this report.

The report has very positive findings considering India- when compared to other countries- with the country being the fastest-growing large economy in the world in 2020 amid Coronavirus disease-induced lockdown, which has sent the global economy into recession.

In the calendar year, 2020, the growth rate of India was estimated at 1.9 per cent, ahead of 1.2 per cent of China. Overall, the Emerging markets and developing economies will hit a recession of 1 per cent with Russia, Brazil and Mexico dragging the growth of these markets. 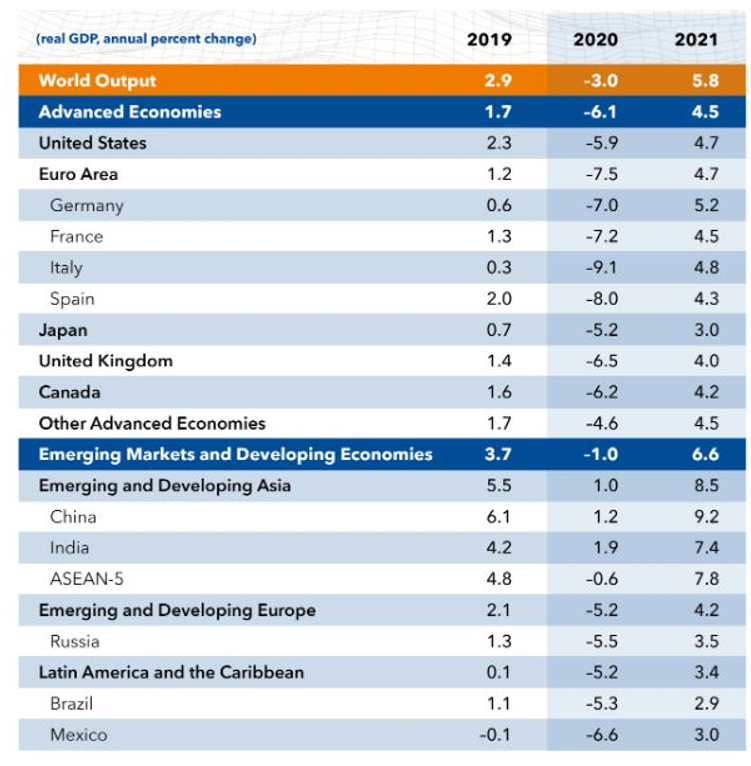 This year, the global economy will shrink by 3 per cent, with the United States- the largest economy in the world- taking hard hit at -5.9 per cent. The European countries like Italy, Spain, United Kingdom, France, Germany, will also hit hard with negative growth of 5-10 per cent.

The silver lining for India in this grim picture is that it would be easy for India to overtake Japan and Germany- the third and fourth-largest economies of the world respectively- as they register negative growth this year and the figure is not expected to bounce much in 2021, despite low base rate.

Currently, India ranks fifth in the global ranking of the countries in terms of nominal GDP. US, China, Japan, Germany are the countries ahead of India. While taking over, the US and China remain a distant dream, Japan and Germany, with 5.2 trillion dollars and 3.9 trillion dollars respectively, could be taken over in the next few years.

In the calendar year 2019, India’s GDP was 2.9 trillion dollars, but with Germany (3.9 trillion dollars) registering a negative growth of 7 per cent, its GDP would actually come down to around 3.6 trillion while India would cross 3 trillion dollars even with abysmally low growth rates. Similarly, Japan is also expected to register negative growth and therefore it would be easier for India to climb at the third position in the ranking in the next few years.

The global growth projections remain in negative territory and only countries like India and China, which are little affected from the virus thanks to their quick preventive measures such as lockdown, will carry out the economic activity at full strength once the pandemic is over.

European countries and the United States, where thousands of people died from Coronavirus disease and Lakhs remain infected, could not open up economic activity at full strength.

The Global economy is experiencing a crisis like no other, opined Gita Gopinath. “This crisis is like no other,” IMF chief economist Gita Gopinath said in her foreword to the WEO as she endorsed quarantines, lockdowns and social distancing as critical for slowing transmission. “These measures can help avoid an even more severe and protracted slump in activity and set the stage for economic recovery,” she said, pencilling in a 5.8% rebound in 2021.

Therefore, while the world enters in negative growth territory, India remains one of the bright spots for the global economy, thanks to pro-active measures taking by the government to contain the disease.

Move aside Russia, China is the new Enemy No.1: Democrats & Republicans are coming together against China