The Indian economy was facing serious slowdown (at least on demand front) till last month. But with the start of festive season, the consumer is on the buying spree once again. This time, the consumers from tier II and tier III cites are leading the demand rise. Amazon and Flipkart, two of the biggest e-commerce companies in the country, which control more than half of country e-commerce market, witnessed record number of transactions on their annual festive sale.

The sales on Flipkart doubled compared to first day of Big Billion Days (BBD) of last year. Similarly, Amazon India recorded its biggest ever single day sale in the company’s existence in the country. The consumers from the tier II and tier III cities accounted for more than 66 percent of sign-ups on Amazon Prime, the exclusive membership program of the e-commerce giant.

Flipkart also witnessed massive rise in the number of transactions on Flipkart Plus, the exclusive membership program of the Walmart owned e-commerce major. The demand rose across all categories including beauty, electronics, and fashion.

“With more first-time shoppers from small towns than ever before and tens of thousands of small sellers across India already seeing success, we are excited by how India loves Amazon’s commitment to offer the largest selection, great convenience and exceptional value to its customers,” said Manish Tiwary, vice president – category management, Amazon India.

The e-commerce companies set huge hopes in the festive season, and targeted two to three times rise in their sales figures. “We started this festive season by setting audacious targets. By all indication, this is going to be the biggest festive season that India has witnessed,” said Kalyan Krishnamurthy, chief executive officer of Flipkart. “E-commerce has not only lifted consumer sentiment but also driven the industry to set new benchmarks,” said Krishnamurthy.

The rise of tier II and tier III cities in India’s consumption story is very important. Earlier, most of the companies focused on the demand by consumers from Metropolitan cities, who accounted for majority of the consumption. But the economic liberalization changed the consumption pattern in the country.

The last few years witnessed unprecedented rise in demand from tier II and tier III cities. With the rise in middle class consumers, who is based in non-Metropolitan cities, the companies have started experimentation in product offering.

According to a report by Nasscom and PwC, the e-commerce market could grow to $150 billion by 2022, riding on rising middle class and surge in the number of internet users. The e-commerce market was estimated to be around 36 billion dollars last year, dominated by Flipkart and Amazon. “A ‘Make-for-India’ solution approach along with conducive policy environment can potentially make e-commerce a $150 billion market by 2022 with a globally leading compounded annualized growth rate of 35%,” said the report. 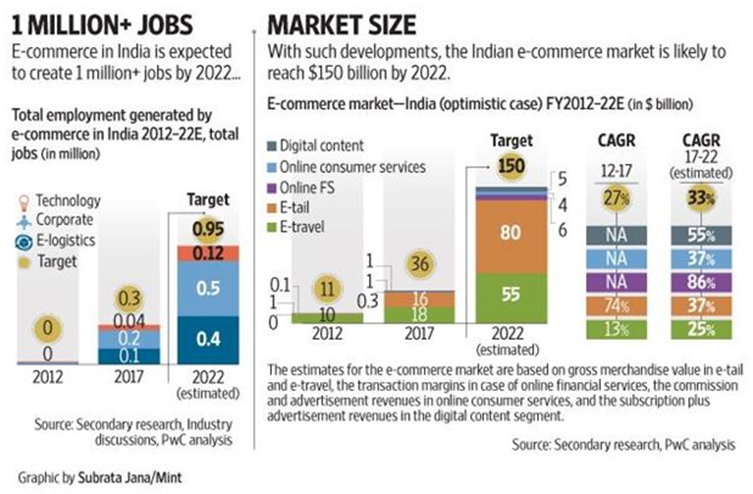 Indian middle class will reach to 54 crores from 380 crores in 2017 and the number of internet users is projected to be around 85 crores in five years from 45 crores in 2017. The new users will come from tier 2 and tier 3 cities and their demands will be very different from demands of most of the current users which is by and large limited to population which speaks and understands the English language.

The new users will ask for diverse language choices, payment modes and substantially different products from the current user base. “The next frontier for the battle in the Indian e-commerce industry is set to be fought around a seamless shopping experience, building digital trust, voice-based or conversational commerce and creating an inventory of localized content,” said Sandeep Ladda, partner and global technology, media and telecom sector leader at PwC India.

The rise of consumer from tier II and tier III city tells that the companies could no longer be dependent on Metropolitan consumers; otherwise, they will be forced out of the market. Also, they cannot take the ‘choice’ of the consumers of smaller cities for granted, as their consumption pattern is very different from that of Metropolitan customer.