The Sadiq Khan of Kolkata

Durga Puja is one of the most sacred festivals in Bengal and is celebrated with great zeal and aplomb all around India. The city of Kolkata has been the epicentre of Durga Puja celebration since time immemorial. The city prepares for months to celebrate the festival at a grand scale; many days are dedicated to the decoration of the Pandals, where the artists depict creativity and perfection.

But this year, the management committees of Durga Puja Samitis, ordered the artists to “secularize“” the Pandals.

There’s a puja pandal where Ajan is being performed from the puja pandal to strengthen social harmony. In West Bengal’s Beleghata, the theme of the puja is communal harmony. Apart from the Hindu rituals and paintings, the Pandal also features decorations of various religious figures.

Azan keeps playing from a loudspeaker to strengthen communal harmony.

There is another puja pandal where the decoration is shocking. The Pandal is decorated with alternate patterns of Hindu Om and Islamic Crescent moon. 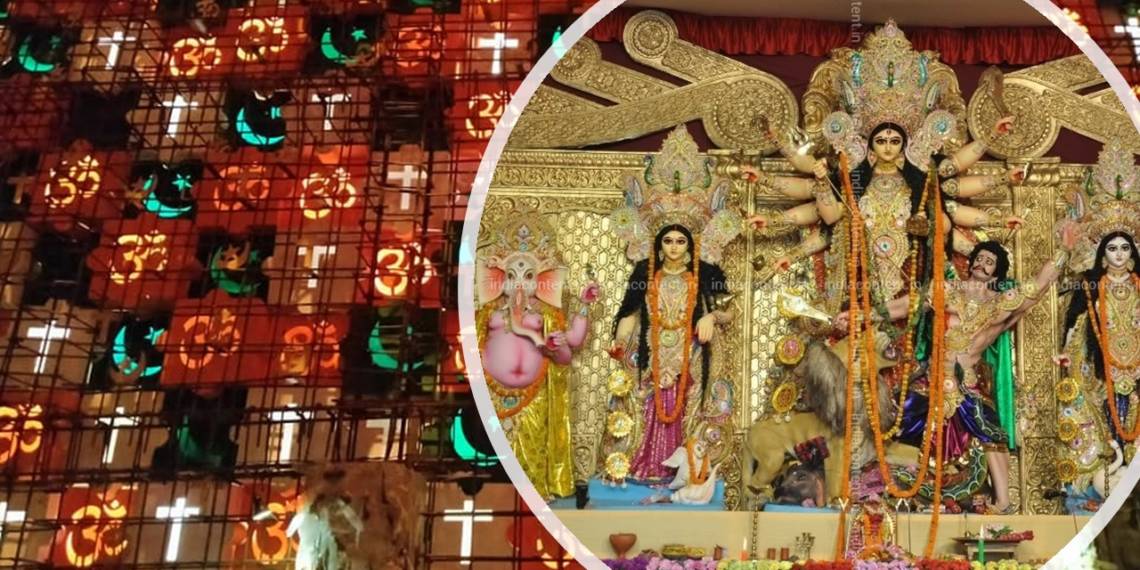 In 2011, when TMC came to power and Hakim was appointed Minister of Urban Development and Municipal Affairs, he promoted ‘secularization’ and his Chetla Agrani Durga Puja organizing committee shaped the marquee as a mosque and a temple.

“What better example of secularism is possible than a Muslim hosting a Hindu Puja? For me and my people, the puja is not a religious occasion, but rather a festival which is celebrated by all, irrespective of religion,” said Hakim.

After he became Mayor of Kolkata last year, the Puja Committees ‘secularized’ the marquee to win the favours of Mayor.

Hakim is a blue-eyed boy of Mamata Banerjee and he is number two in the party since Mukul Roy left TMC to join BJP.

After Sovan Chatterjee, previous Mayor of TMC left the party to join BJP, Mamata Banerjee decided to choose Hakim, who was then Urban Development Minister to contest Mayoral Election.

At that time, he was not a member of Kolkata municipal corporation and therefore not eligible to stand for the Mayor election. But TMC government was hell-bent to make Hakim Mayor of Kolkata and passed Kolkata Municipal Corporation (Second Amendment) Bill, 2018 to amend the law.

The amendment bill allowed a person to become Mayor of the city if s/he is elected within a period of six months.

After the 2016 assembly elections, BJP became an important player in West Bengal and Hindu votes shifted to the saffron party. To preserve its stronghold among Muslim voters, Mamata Banerjee promoted Hakim in the party as well the government. However, Mamata changed her stance once again after the 2019 general election and nowadays she is playing a devout Hindu.

“Before the 2019 Lok Sabha polls, Mamata Banerjee pitched herself as a pro-minority leader, one of the outcomes of which was the choice of Hakim as the Kolkata mayor. Now, when she needs to strike a balance, Firhad again suits the role more than anyone else in her team,” said political analyst Anjan Sengupta.

Hakim was elected as Mayor of Kolkata in December 2018 and since then he had tried to secularize the city.

He had shady secular credentials before he was elected as Mayor.

In an interview to Maleeha Hamid Sediqqui of the Pakistani English daily, Dawn, he referred the port area of Kolkata, which is his constituency as “Mini Pakistan”.

In 2017, TMC government appointed him as chairman of Tarakeshwar Temple Board (TDA). On his appointment, BJP National General Secretary, Kailash Vijayvargiya, tweeted, “Firhad Hakim is the same leader who once said (to Pakistani Journalist Maleeha Hamid Sidiqqui of Dawn) that a portion of port area in Kolkata is like a mini Pakistan. Now Mamata Banerjee has appointed the same person as the chairman of Tarakeshwar Temple Board.”

In 2018, BJP MP Subramanian Swamy met Mamata Banerjee and threatened to file a court case if Hakim is not removed from the Chairman post.

In June this year, the TMC government removed him from the post and appointed former MP of Hooghly Ratna De Nag as TDA Chairman.

Tarakeshwar Temple Board in Bengal gets new Chairman.Dr Ratna De Nag,Ex MP,assumed office afterUrbn.Devpl.Minister Firhad Hakim resigned. CM @MamataOfficial outstanding character is she keeps her word. On my arguments made to make this change for the sake of Hindus she assured me pic.twitter.com/bRdOt76Qk6

Hakim is number two in TMC despite his differences with Mamata’s nephew and heir apparent of the party Abhishek Banerjee.

In a footage widely circulated in March 2016, he is seen as accepting a bribe of 5 lakh rupees.

Mamata Banerjee does not want to lose the ‘secular votes’ in West Bengal and therefore she ‘chose’ Hakim to become first Muslim mayor of Kolkata post-independence period and Hakim is utilizing the opportunity to ‘secularize’ the city.

He aims to become Sadiq Khan of Kolkata. Khan, a Labor party politician, was elected as Mayor of London on May 2016.

Since then, he has carried massive drive to secularize (read Islamize) the city. London has 12.4 per cent Muslim population compared to 20.4 per cent of Kolkata while the total population of both the cities is almost the same.

Firhad Hakim, the Mayor of Kolkata, who sees “mini Pakistani” in Muslim majority areas of Kolkata is the prime example of how the Muslim politicians attempt to ‘secularize’ the Hindu festivals and religious sites by placing themselves in the position of power like Mayor or Chairman of Temple board.

“This is Hindooo extremism”, Liberals are having a glorious meltdown after Rajnath Singh’s ‘Rafale Puja’

Alright! So China is now on India’s side as far as its position on Kashmir is concerned