Rape is often trivialized in India which severely hampers the cause of women empowerment. There have been instances when comedians have been mired in controversy as they sought to make jokes on rape. It was believed that India had reached a watershed moment in the aftermath of the gruesome rape of Nirbhaya which sent shock waves across the nation. Unfortunately, it seems like many Indians are yet to learn their lessons and continue to trivialize rape and the latest one to jump on the bandwagon is Anna Linda Eden who in a Facebook post wrote: “Fate is like rape, if you can’t resist it, then try to enjoy it.”

Such a deplorable statement was followed up with a winking emoji. It was like she had absolute disregard for natural calamities, the post had the picture of Kochi flooding on one side and on the other side, had her husband Hibi Eden, enjoying a sumptuous dessert in face of a disaster. Hibi Eden also happens to be the Member of Parliament from Ernakulam.

Anna through a single Facebook post tried to mock both rape and floods in a distasteful manner. Countless rape victims in India have had to face unspeakable horrors and it’s sickening that she resorted to trivializing rape by advising to at least try to enjoy it. If women don’t support women, the cause of women empowerment will take a severe beating and statements like this from someone of Anna’s stature will prove detrimental in ensuring equality and weed out the deep-rooted patriarchy. 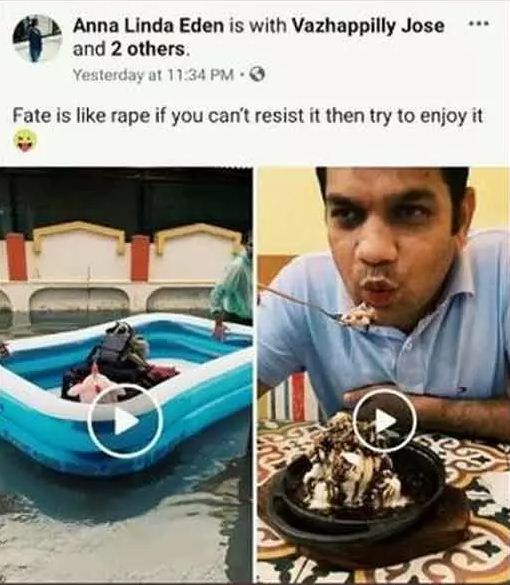 India’s most literate state Kerala has had its fair share of gruesome rapes and Anna’s distasteful post brings the case of Jisha to mind, who was mercilessly raped in Perumbavoor in 2016. The ghastly details of her rape served as a grim reminder of the case of Nirbhaya because of the similar level of brutality and senseless violence. It is futile to even imagine the horrors Nirbhaya and Jisha would have faced as the innocent girls were victims of extreme brutality.

To even think someone can actually ask people to enjoy rape is sickening and exposes their radical mindset as we can see in the case of Anna.

Kerala often prides itself on being the most literate state in India. However, the state doesn’t fare well compared to its peers when it comes to crimes against women. According to a report, the incidence of rape in Kerala is 63 per Lakh population while the national average stands at 56.3 – thrice as high as the rate in the neighboring Tamil Nadu (18.3). It is quite ironic as Kerala has been performing consistently better in other parameters. Not only does the state have the highest literacy rate and a healthy sex ratio (966 per 1000 men), it also boasts of the highest women’s literacy at 92%. The dichotomy between social indicators and violent crimes is a baffling one.

Faye D’Souza has made a name for herself by championing the cause of women empowerment and stands atop as a liberal icon. Her stoic silence against Anna’s post is a testament to the fact that Faye only likes to cherry-pick controversial statements and present them in a distorted story. In case, such a deplorable statement was made by the spouse of the Ruling Party’s representative, Faye D’Souza would have been all over the case and would be discussing the same on her prime time show to showcase the BJP as a party full of uneducated people. Her silence in this case only exposes her hypocrisy.

Anna faced severe backlash following her post and unsurprisingly, decided to take her post down. Her absolute disregard for crimes against women was exposed in her shoddy apology where she tried to divert by highlighting the problems in her life and how her father’s condition is critical who was recently admitted to an ICU at Amrutha Hospital. No matter how critical her father’s condition is (hopefully he will get better soon) it doesn’t give her the right to trivialize rape. Her apology was bizarre which also mentioned Amitabh Bachchan in a bid to divert the attention. Her apology reeked of entitlement and its absolutely shameful that Anna can spread such backward mentality on social media and get away with it.

“The master-servant concept envisaged in IPC should change”, Amit Shah all set to revamp the British era Indian Penal Code

Businessmen in some North Eastern states need to pay ‘Hafta’, if they want their businesses to survive