Newswire
UN concerned over Afghan election result crisis 1 hour ago
This jumbo has a way with water sprinkler 1 hour ago
Realme’s Smart TVs coming to India in Q2 2020 1 hour ago
Kerala school students to learn English at hi-tech IT labs 1 hour ago
S.Korea reports 4th COVID-19 death as cases spike to 556 1 hour ago
Serie A games affected due to spread of coronavirus 2 hours ago
Next
Prev

by Amit Agrahari
in Economy, Economy1

The six-member expert committee led by Bimal Jalan to review the central bank’s excess economic capital has recommended nominal transfer of surplus reserves to the central government in a phased manner over the period of three to five years. “The report has proposed a formula for a nominal transfer of a portion of the RBI’s reserves to the central government in a period of three-five years. This is in line with the current practice being followed by the RBI for transferring dividend annually,” said a person close to the development.

Previously, former Chief Economic Advisor to the Government of India, Arvind Subramanian has argued that RBI holds an excess reserve of 5.7-7.9 lakh crore rupees. In a paper published in India’s premiere journal Economic and Political Weekly (EPW), Subramanian reasoned that “The RBI has an unusually high level of capital. If the choices made by other central banks are used as a benchmark, the RBI appears to have a minimum of Rs 5 lakh crore in excess capital.” The paper was titled as ‘Paranoia or Prudence? How much capital is enough for the RBI?’ 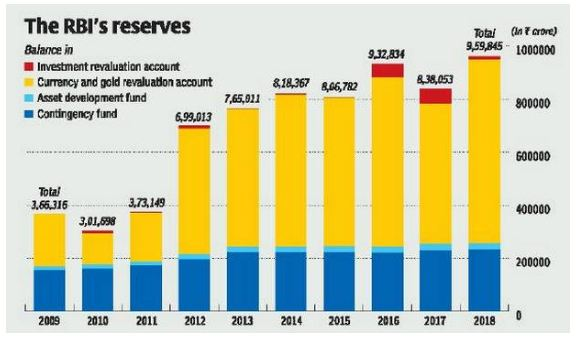 The research paper suggested that alternative analysis could suggest even greater excess reserve. “An alternative cross-country econometric analysis suggests that the excess capital is even greater, between Rs 5.7 lakh crore and Rs 7.9 lakh crore,” read the paper. The paper argued that RBI’s capital to assets ratio is substantially higher in comparison to central banks across the world. The global media for a central bank’s capital to asset ratio is 8.4 percent while RBI has kept 28 percent in its pocket. 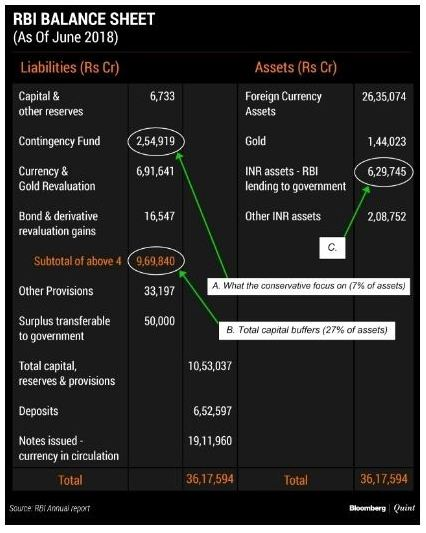 Subramanian was not the first to argue that the RBI is holding excess capital. Earlier Christopher Wood, chief strategist at the investment group CLSA compared RBI’s holding to Federal Reserve System, the central bank of United States and argued that RBI’s holding is 30 percent in comparison to 1 percent of Fed. “The RBI balance-sheet is as overcapitalized as the [US central bank] Federal Reserve’s is undercapitalized” said Wood. 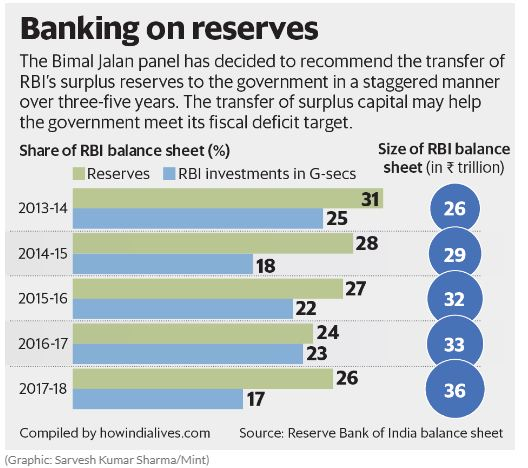 The government needs money to bridge the gap created due to subsumed market funding for the recapitalization of public sector banks. “Given that the RBI governor has changed, it is quite possible that some additional money could be brought in from the central bank in the form of dividend. Given the tightly packed budget and the government’s stand to maintain its expenditure commitments, it is not in a position to cut down on capital expenditure,” said economic affairs secretary Subhash Chandra Garg.

RBI under Raghuram Rajan and Urjit Patel has been extremely conservative in the transfer of funds. This was one of the two major contention points between the government and RBI, the other being liquidity crisis.

Move aside Nusrat and Mimi, BJP is set to beat Mamata Banerjee's TMC at star power as well

‘Modi made us irrelevant’, After Sagarika and Karan, leading liberal Pratap Bhanu Mehta bites the dust

Nepotism in BJP: Yediyurappa has gone all out to promote his son and it’s looking ugly for him

‘Enemy’s enemy is a friend,’ Turkey gets a taste of Chanakyan realpolitik as Jaishankar comes into action