Newswire
China probes company that sold COVID-19 test kits to Spain 51 mins ago
Smith not lone option for Test captaincy, says Paine 51 mins ago
Chinese Olympic Committee supports IOC decision on new dates 51 mins ago
Air pollution trapped in ice shed light on 12th Century Britain 51 mins ago
Yogi determined to check Tablighi fallout in UP 1 hour ago
Over 400 from Assam were near Jamaat hotspot: CM 1 hour ago
Next
Prev

Reserve Bank of India has constituted a six-member expert committee led by Bimal Jalan to review the central bank’s economic capital framework. The committee will suggest the proportion of reserve which RBI should keep with itself and decide the capital to asset ratio. In the last few months, there has been a tussle between RBI and the government on wide range of issues including prompt corrective action (PCA) for weak banks, special liquidity window to end the liquidity crisis in the non-banking financial sector, easing of NPA measures for MSMEs and transfer of excess reserves to the government.

Former RBI governor Urjit Patel resigned due to tussle with the government and critics predicted that central bank’s autonomy was under threat. However, the markets responded positively after the appointment of Shaktikanta Das as the new RBI governor. The appointment of such an experienced committee will help in ironing out the differences between the RBI and the center. Almost all the top policymakers and economists suggested that RBI holds excess capital and it should transfer funds to the government. The former chief economic advisor, Arvind Subramanian has argued that RBI holds an excess reserve of 5.7-7.9 lakh crore rupees. “The RBI has an unusually high level of capital. If the choices made by other central banks are used as a benchmark, the RBI appears to have a minimum of Rs 5 lakh crore in excess capital,” read a paper published by him.

Reserve Bank of India under Raghuram Rajan and Urjit Patel has been extremely conservative in the transfer of funds. The government was already struggling for money as the hike in crude oil prices had raised public spending and stressed the fiscal deficit target.

Earlier Christopher Wood, chief strategist at the investment group CLSA compared RBI’s holding to Federal Reserve System, the central bank of United States and argued that RBI’s holding is 30 percent in comparison to 1 percent of Fed. “The RBI balance-sheet is as overcapitalized as the [US central bank] Federal Reserve’s is undercapitalized” said Wood. The excessive capital held by RBI has an opportunity cost as it has no productive use and if this capital is transferred to the government it would provide the higher social return. 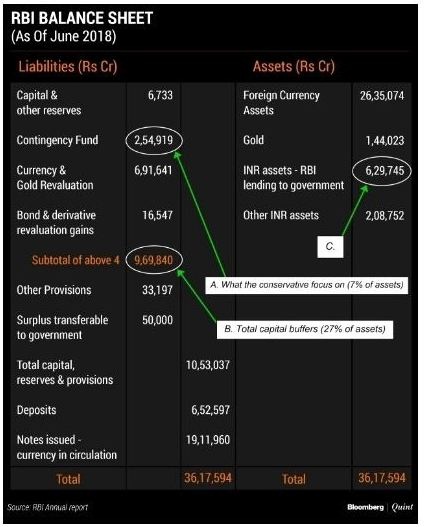 The government needs money to bridge the gap created due to subsumed market funding for recapitalization of public sector banks. “Given that the RBI governor has changed, it is quite possible that some additional money could be brought in from the central bank in the form of dividend. Given the tightly packed budget and the government’s stand to maintain its expenditure commitments, it is not in a position to cut down on capital expenditure,” said economic affairs secretary Subhash Chandra Garg.

Bimal Jalan himself was governor of RBI from 1997 to 2003. One of the most reputed public servants of the country, Jalan has held many high positions in several governments across the political spectrum with major of them being the roles of Finance secretary (January 1991- September 1992) and chairman of the Economic Advisory Council to the Prime Minister. Bimal Jalan has also been a writer of many books with the latest one being India Ahead: 2025 and Beyond.

The other members of the committee include Rakesh Mohan who is former deputy governor of Reserve Bank of India and is set to be vice-chairman of the committee. The four other members are Bharat Doshi and Sudhir Mankad, RBI central board director N S Vishwanathan, deputy governor of RBI and Subhash Chandra Garg, Economic Affairs Secretary to the government.

No takers of Indian law? Javed Akhtar calls for Fatwa to close mosques because some people are above Indian law

‘Don’t believe this crap,’ article claiming India is drowning in Coronavirus goes viral in China, but Chinese people reject it

‘You are doing so much for the country,’ Muslim woman in Kashmir donates her Hajj savings to RSS

‘Rename WHO as Chinese Health Organisation,’ with their Olympics dream crushed by Coronavirus, Japan is furious with China