No Result
View All Result
Newswire
Indian-American Democrat running for Cincinnati Mayor 26 mins ago
NIA summons to journalist, farmer leaders, others in SFJ case 32 mins ago
S.Korea to extend social-distancing rules 47 mins ago
Consumers spend $57 bn on video games in US in 2020 50 mins ago
Pak no country for Christians, reveals report 53 mins ago
First vax shot given to Bihar hospital sweeper 56 mins ago
Next
Prev

Within hours of complaint, Railway takes decisive action against a cheating contractor at Habibganj railway station

The functioning of Railway ministry has become transparent and efficient under the young and dynamic leadership of Piyush Goyal. One particularly praiseworthy aspect he has instilled in the work culture at the Railways is that of accountability. It does not matter whether the erring party is a high ranking official or an sub-contractor of the Railways, they are held responsible for their wrongdoings in a swift manner. The quick response to citizen’s complaints has ensured a system of accountability and efficiency in the work culture of the Railways.

In a recent case at Bhopal’s Habibganj railway station, a private contractor was fined for not abiding by the rules and defrauding the commuters. The railways have mandated the following rates for the parking at railway stations. ‘First 15 min are free, first two hr 20 Rs, subsequent 40 Rs per 2 hr’ which is as per National Urban Transport Policy Approved by union cabinet in 2006.

However, the contractor was charging 20 rupees for first 15 minutes instead of keeping it free, as per the contract. The contractor deliberately defaced the 15 minute from the board to charge 20 rupees to even the people who parked the vehicle for less than 15 minutes, as shown in the image below. 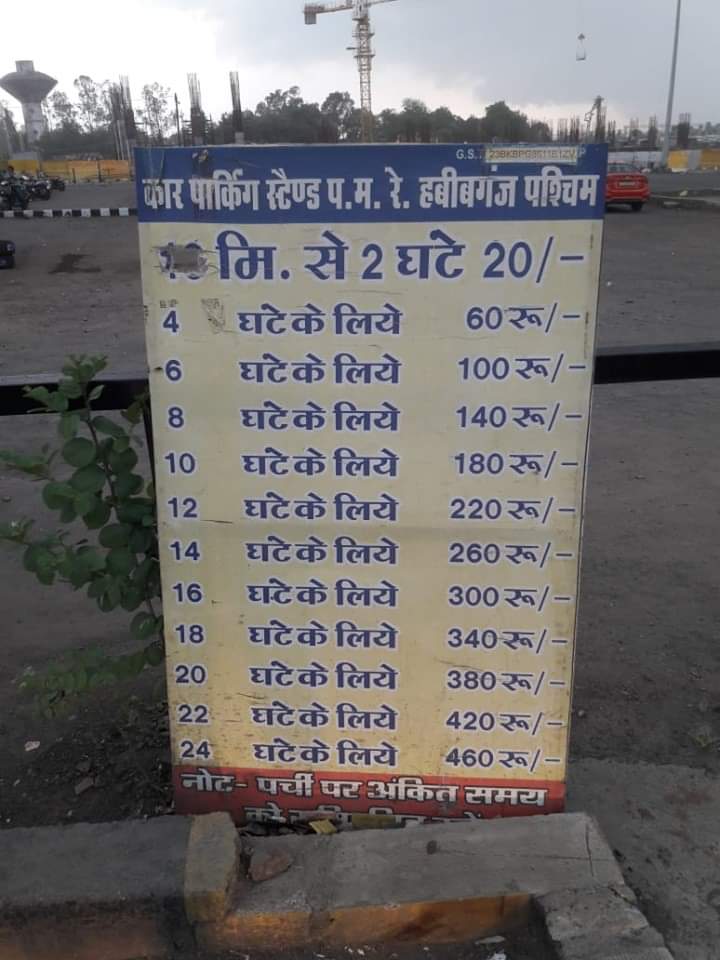 According to local sources, after complaints about this corruption were received on social media and by the local commuters, the railway officials took quick action against the contractor. The contractor was fined and asked to place a new board immediately. 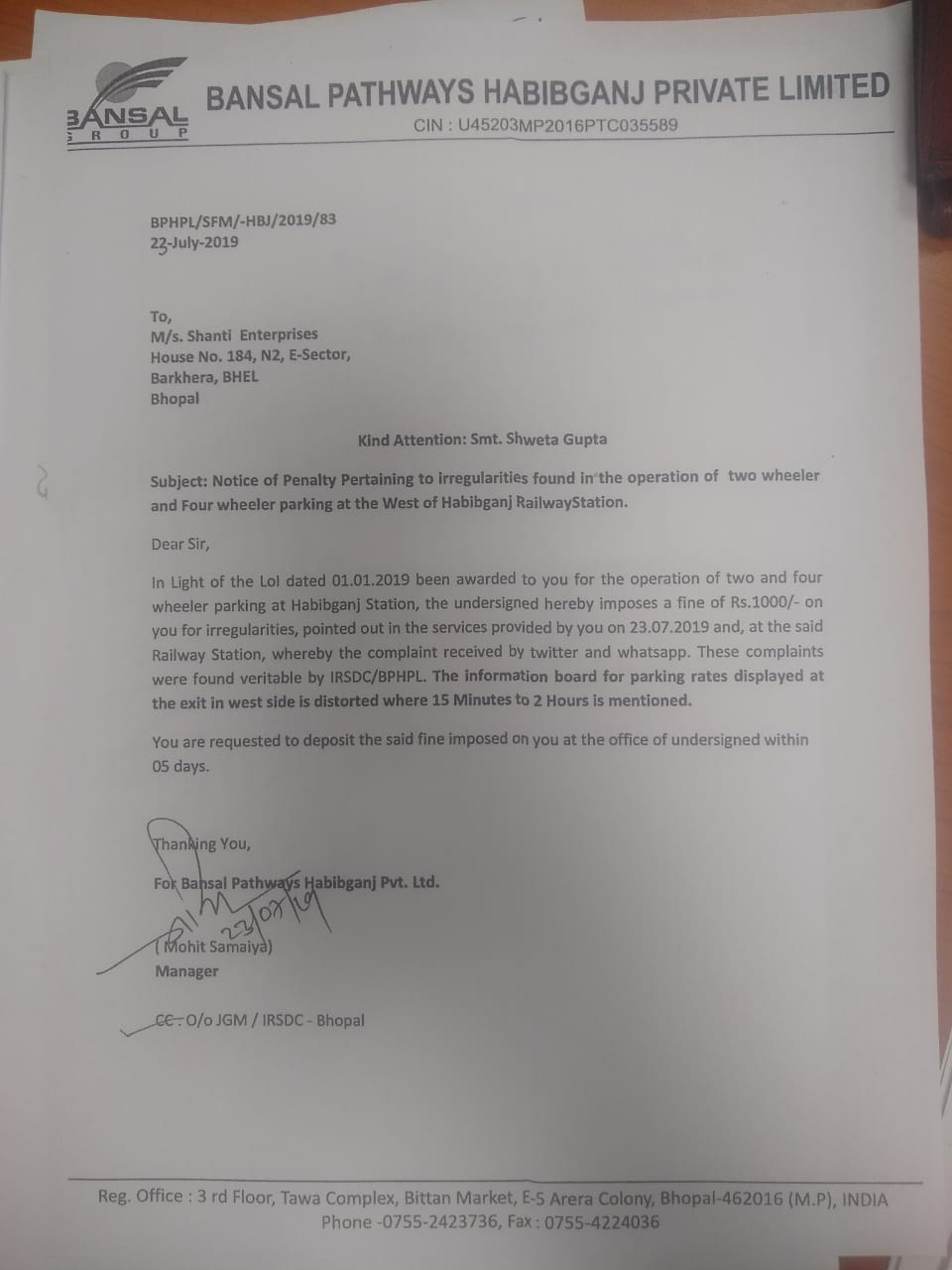 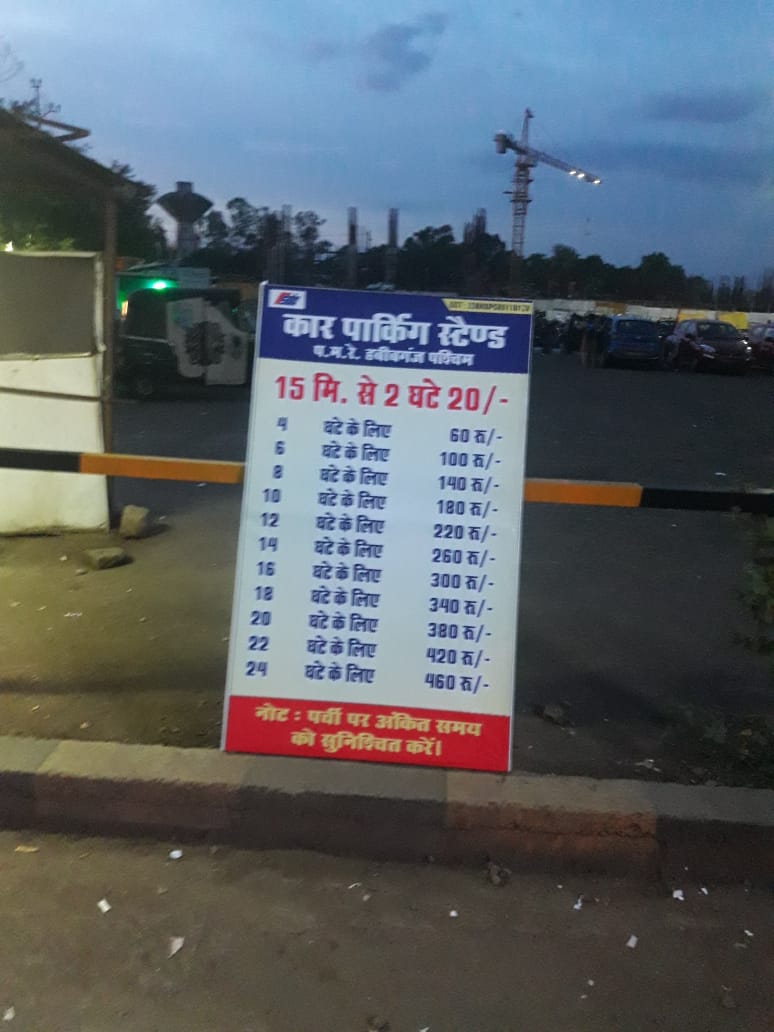 The contractor has placed a new board which has rates as mandated by the National Urban Transport Policy. The railway charges the parking essentially to discourage use of railway land as cheap back yard parking plot. It facilitates passengers as they are either using for drop – free for 15 minutes which was not free earlier, pick up – very reasonable for two hours. 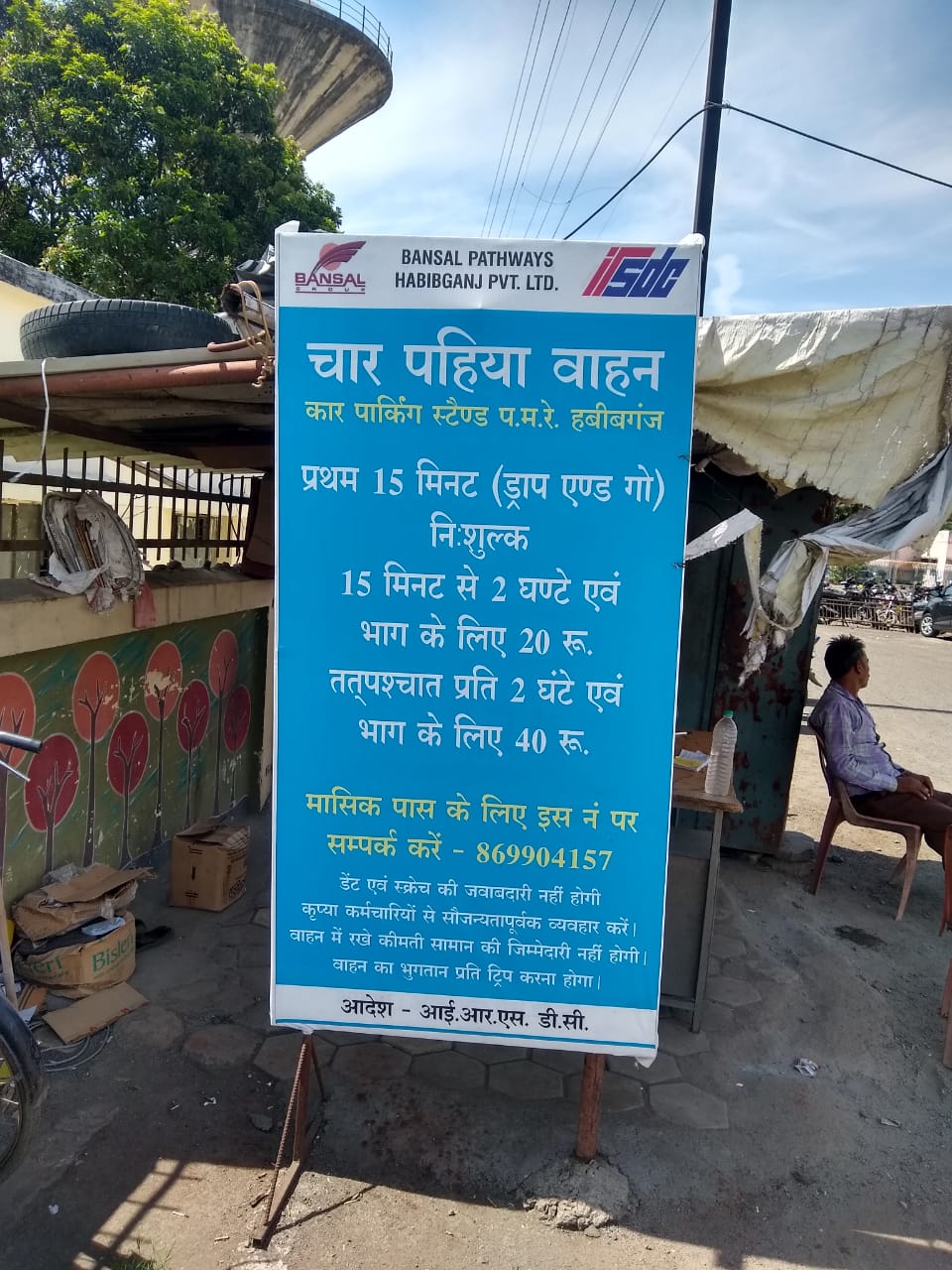 The quick action by the railway officials has demonstrated again that the ministry is committed transparency and efficiency in all aspects.

Habibganj railway station in Madhya Pradesh is among two stations with world-class facilities matching to that of airports. Habibganj became the first railway station in the country to be developed under Public-Private Partnership (PPP) model with Bansal Pathways Pvt Ltd. as IRSDC partner. The redevelopment of station cost around 450 crore with 100 crore for the station development and 350 crore for commercial operations around the station.

The railway ministry under Piyush Goyal has made the government officials as well as private players accountable. Strict action is being taken against contractors who are generating ‘unlawful’ profit through contracts.

With action being taken against some officers who have integrity issues, the right message is going to people.

Even in the Railways, we are now studying the profiles of many officers to see if some action can be initiated against them to send the right message. pic.twitter.com/vsK2sMeytq

On 15th July, Piyush Goyal had stated “With the action being taken against some officers who have integrity issues, the right message is going to people. Even in the Railways, we are now studying the profiles of many officers to see if some action can be initiated against them to send the right message.”

Under the leadership of PM Modi and Piyush Goyal, Indian Railways is being transformed at a fast pace and the modernization plans are being put forth. Indian Railways has operated with socialist era hangover for far too long and Goyal is trying to make it friendly as far as markets, public finances and consumers are concerned.