by Amit Agrahari
in Opinions
1

The famous phrase ‘Good Politics makes Bad Economics’ points to the idea of dumping selfish political gains over viable economic policy and the Congress party never made that mistake, as it always prioritized good politics. Five decades ago, the party took the first step in ruining the economy of the country to win elections and that was the nationalisation of each and every bank in the country at the time. Congress party performed poorly in the 1967 general elections and lost command in many states. At the time, a High Command set up a committee to review the performance of the party and look after the reasons behind loss.

The review committee concluded that slow progress towards ‘socialism’ is the reason behind loss of the party, and hence bank nationalisation. Indira Gandhi, the then Prime Minister was fighting against internal rebellion of Congress party against old guards. The ‘young Turks’ who stood behind Mrs Gandhi suggested that she should step up the socialistic stance to consolidate her position in Congress party.

The first step suggested to solve this political problem was ‘Nationalization of Banks’. Morarji Desai, the then finance minister and Deputy Prime Minister was sacked by Indira Gandhi without any prior notice. Desai was reform minded and Indira Gandhi knew that he would resist the bank nationalisation move. A leader as authoritarian as Indira Gandhi obviously did not like independent minded leaders.

“In the enthusiasm over the nationalisation of banks, the people have forgotten the unsavoury treatment that was meted out to the erstwhile Finance Minister. He was virtually dismissed without even the courtesy of prior intimation or consultation even when, in addition to being a loyal Finance Minister, he was also the Deputy Prime Minister of the country,” wrote trade union leader V B Karnik in The Print.

After removal of Desai, the decision of nationalization of every private bank was implemented on 19th of July, 1969. At that time, these banks controlled 85 percent of total deposits and therefore practically the whole banking sector came under government control. The reason given behind this disastrous step was that the government wanted to increase the rural penetration of each bank and prioritize the lending to MSMEs. Both things remain a distant dream and five decades on improvements on this front that can be accredited to any nationalized bank is negligible. Even if the government mandated that every private sector bank must have a certain percentage of branches in rural areas and certain percentage of lending must go to MSMEs, the situation would have been much better.

Indira Gandhi herself admitted that the nationalization is driven by political considerations. “The political situation in our country today demands that banking facilities should be extended in an increasing measure to backward areas, to agriculture, to small-scale industry and so on and perhaps banking operations should be informed by a larger social purpose,” said Mrs Gandhi.

Every year central government puts thousands of crore of taxpayer’s money in banks to recapitalize them. As evident from the table below, the government has infused certain amount of capital almost every year since 1980s. 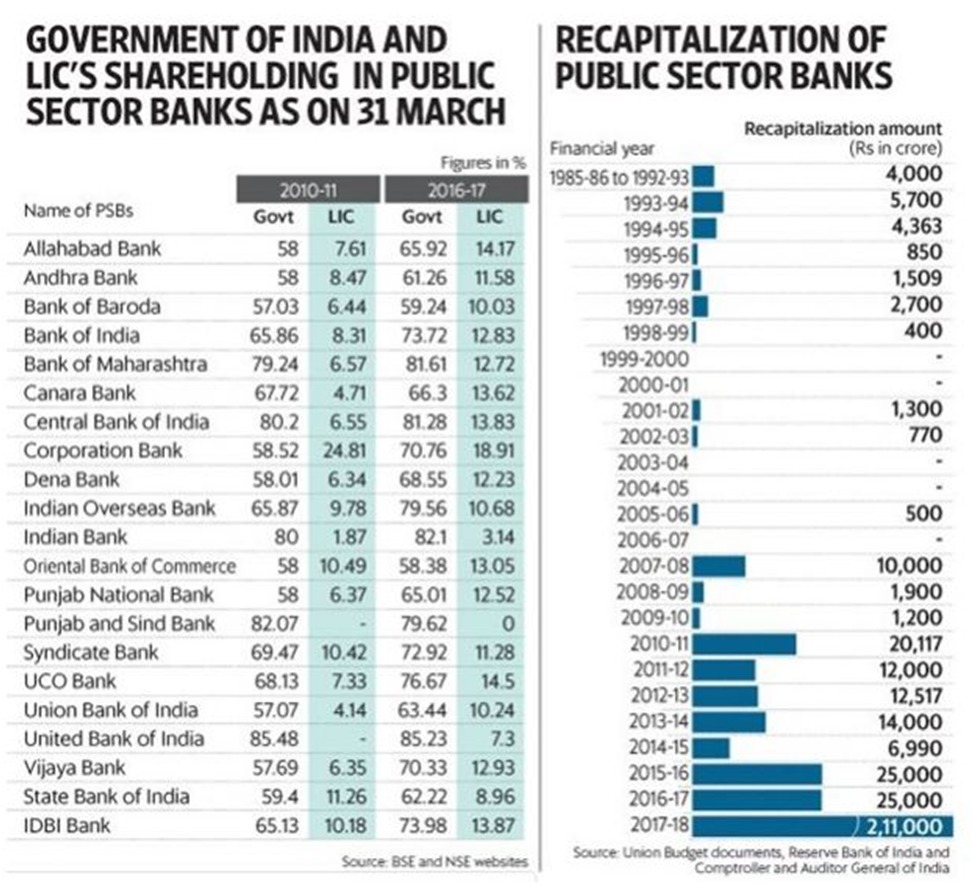 The step towards nationalization corrupted the banking sector like nationalization does to any other industry. Modi government has shown a reformist approach in first term and therefore it could be trusted to gradually privatize and consolidate the public sector banking. The first budget of second term, presented by Finance Minister Nirmala Sitharaman, also emphasized on the positive role of the private sector indicating that the leaders behind the wheel of India’s economy realize the need for privatization and may take more and more steps towards it.

Russia says no to military deals with Pakistan, rejects request for 50,000 AK rifles