For a developing country like India that has an abundance of cheap labor, capital and a pro-active government are the two other things required to make it manufacturing hub. The country got a pro-active government when Narendra Modi stormed to power in 2014 but the only thing that stops India from attaining double digit growth is the unavailability of cheap capital.

The government tried to solve this problem by easing the FDI norms and PM Modi personally tried to improve relationship with capital rich western countries to attract more FDI.

If the relationship between FDI growth rate with that of GDP is compared, one realizes that ‘Every 1% increase in ‘Foreign Direct Investment’  results in about 0.4-0.5% increase in GDP, though it depends on country’s development stage heavily’. Therefore, huge investments from capital rich countries is very important for attaining a double-digit economic growth.

The efforts of the government have proven fruitful as FDI in India has increased exponentially in India while other developing Asian economies are losing on this front.

The FDI inflows to India increased by 6 percent to 42 billion dollars compared to 40 billion dollars last year, as per United Nations Conference on Trade and Development (UNCTAD) World Investment Report 2019. The rise in FDI was helped by 16 billion-dollar Flipkart Walmart deal which took total cross border merger & acquisition amount to 33 billion dollars from 23 billion dollars a year ago. 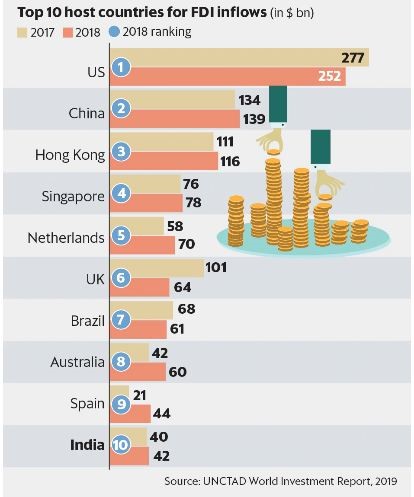 Overall, the South Asian region received 54 billion dollar FDI with 3.5 percent growth rate. The inflow to Bangladesh and Sri Lanka rose to 3.6 billion and 1.6 billion dollars respectively. However, investment in debt ridden Pakistan declined by 27 percent to 2.4 billion dollars which means India received 18 times more investment than Pakistan. In fact, FDI received by India state of Maharashtra and Delhi was bigger than that by Pakistan.

Manufacturing sector bagged the majority of the FDI shares followed by ‘Information and communication services’ and ‘financial and insurance activities’.

Modi government has majorly focused on the manufacturing sector. To give a boost to manufacturing, the government launched the ‘Make in India’ programme on 25th September 2014, just 4 months after coming to power. Under this initiative, FDI policy was liberalized with 100% Foreign Direct Investment (FDI) being permitted in all 25 sectors, except for space (74%), defense (49%) and news media (26%). As a result, India emerged as the top destination globally in 2015 for foreign direct investment (FDI), surpassing USA and China.

The greater inflow of investment has helped the nation to become a hub of manufacturing which is crucial for the growth of a country with such a large population. China, which has a massive population like us, depends on manufacturing to employ the majority of its population as jobs in the service sector are limited. India has been growing into a big manufacturing hub of mobile phones as there were only two mobile phone manufacturing factories in India in 2014, while currently, there are 120 factories operating in the country. The availability of capital along with cheap labor and proactive government will help India to become ‘factory of the world’ and push the GDP growth to double digit which the policymakers dreamed for decades.

Mamata has met her Singur moment, and she is definitely going down this time