Infrastructure has been a major priority for Modi government in last five years. It made significant investment in public transport, highway construction, railways, waterways and air connectivity. The large public investment in infrastructure was supported by oil bonanza which government got in initial years due to slump in crude prices. The investment in road construction sector by UPA government was very low because various welfare programs like MGNREGA had constrained them from financing infrastructure building. The last big push in road development was carried out during NDA-1 government which was led by former prime minister Atal Bihari Vajpayee. The two big infrastructure projects- Golden Quadrilateral Network and Pradhan Mantri Gram Sadak Yojna (PMGSY) were started during this time. 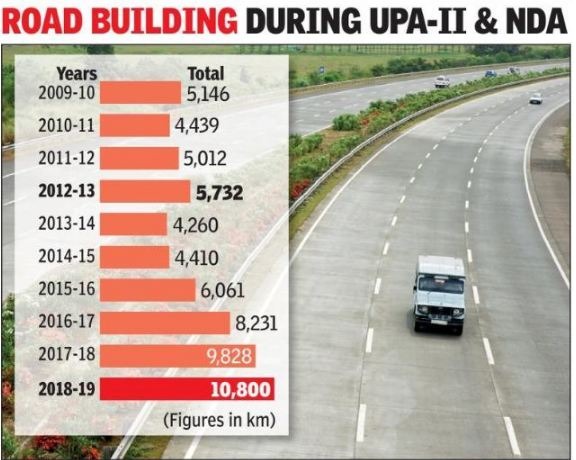 The construction activity spurred after by Transport Minister Nitin Gadkari brought an innovative solution to the problems which hampered the growth during the UPA era. A large number of stalled projects had been blocking infrastructure projects and at the same time adding to NPAs of the banking system. To overcome this problem, the Modi government brought the hybrid annuity model (HAM) in 2015. Under the HAM, the government will pay 40% of the project cost to the developer in the first five years through annual payments (annuity). The remaining payment will be made on the basis of the assets created and the performance of the developer. In this model, there will be a toll right for the developer, while revenue collection would be the responsibility of the NHAI. The advantage of HAM is that it provides money to the developer in order to start the project while the financial risk is shared between both.

The infrastructure in India has been very poor for decades. Successive Congress governments ignored the issue of connectivity in the country. Vajpayee government was the first to seriously focus on the subject of road construction to enhance the condition and number of the roads in the country and to build world class highways. The work slowed down in second term of UPA government because its spending priorities were different. However, since Modi government came to power, the road construction picked up once again. Infrastructure is vital for development of any country because it has a very high chain effect on economic growth.

The infrastructure spending would help India to achieve double digit economic growth. The road construction spree would help Modi government in upcoming Lok Sabha election, given the fact that now even remote areas of the country have roads and highways.

India takes steps to iron out its trade deficit with China

WHO is a FRAUD! No matter what WHO says, wear masks when you go out to protect yourself from Coronavirus

Korea and Corona: How South Korea is combating Coronavirus with mass tracing and testing

From US to Europe, Tablighi Jamaat has been silently linked with terror cases for years