by Akshay Narang
in Economy
0

Recently, 108 economists and social scientists had questioned the creditability of India’s official data. In an official statement, they had stated, “The national and global reputation of India’s statistical bodies is at stake. More than that, statistical integrity is crucial for generating data that would feed into economic policy-making and that would make for honest and democratic public discourse.” The statement also read, “Lately, the Indian statistics and the institutions associated with it have however come under a cloud for being influenced and indeed even controlled by political considerations. In fact, any statistics that cast an iota of doubt on the achievement of the government seem to get revised or suppressed on the basis of some questionable methodology.”

Opposition parties have repeatedly claimed that the growth in the country has not translated into jobs. However, when in power, these parties never tried to bring transparency in jobs and the unemployment data. “More than a lack of jobs, the issue is a lack of data on jobs. Our opponents will naturally exploit this opportunity to paint a picture of their choice and blame us,” said PM Modi in an interview with Swarajya magazine. The government has started using EPFO data to calculate the number of formal jobs created in the country.

Now, a statement has been released by 131 prominent chartered accountants that have busted the myths perpetrated by the official statement given by the 108 economists and social scientists. It includes some big names such as T. V. Mohandas Pai, Chairman, Manipal Global, Nilesh Shah, MD, Kotak AMC, Ajay Bahl, Founder AZB and KG Somani, Somani & Co. Clearing the air around the authenticity of data collection and exposing baseless allegations made by certain self-acclaimed intellectuals, the letter states, “Disputing Government data is routine for experts around the world. However, it is unusual for a particular set to come together to discredit all data and long standing institutions of eminence. The appeal seems even more devious as the data in respect of GDP, Poverty Alleviation, Ease of Doing Business are being duly published even by international agencies including World Bank, IMF and many others. The international data and independent agencies have clearly confirmed the data being published by Government agencies.” Therefore, this letter makes an important argument. It is clear that India’s growth story is a fact and not some invented story. It is reflected not only in economic statistics but has also been confirmed by reputed supranational organisations. 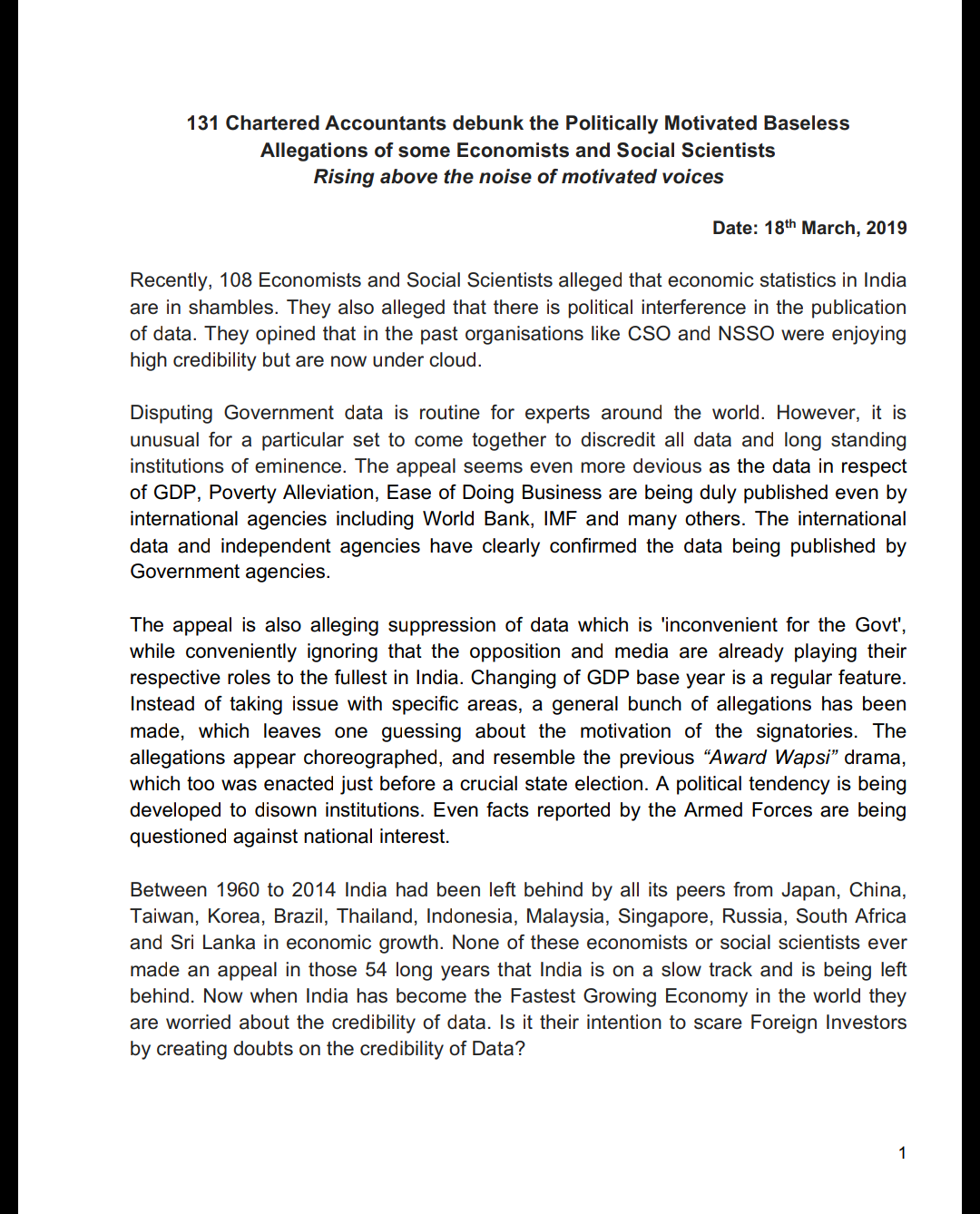 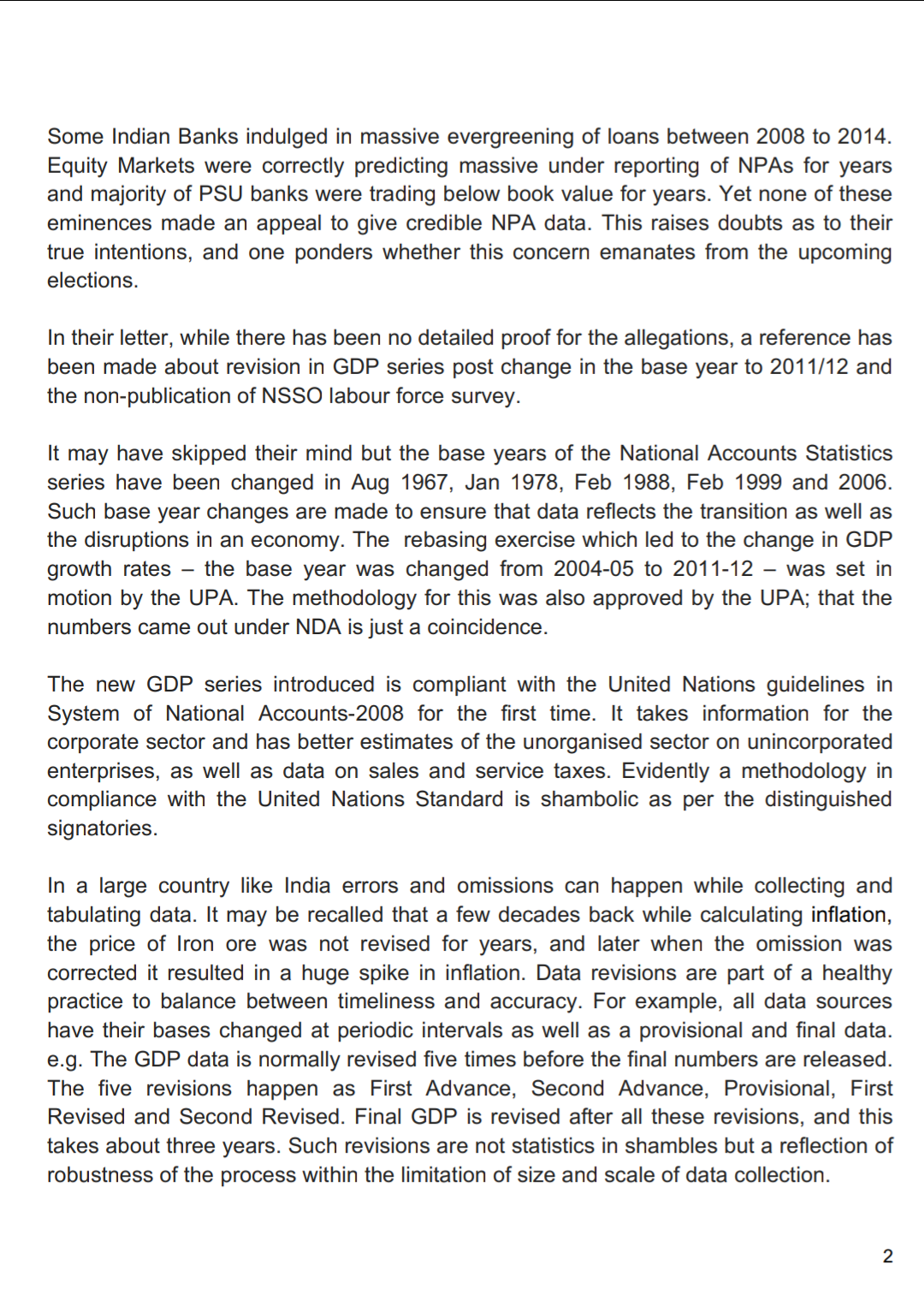 A particular set of social scientists and economists are now questioning all such data that has been given by national bodies and has also been corroborated by international agencies. The letter made it clear that changing of GDP base year is a regular feature and the statement by the 108 Social Scientists and Economists does not focus on specific areas but makes general allegations, which leaves one guessing about the motivation of the signatories. Coming down hard on the Award Wapsi brigade, this letter by 131 chartered accountants states, “The allegations appear choreographed, and resemble the previous “Award Wapsi” drama, which too was enacted just before a crucial state election. A political tendency is being developed to disown institutions. Even facts reported by the Armed Forces are being questioned against national interest.” The letter by the chartered accountants also questions the intentions of those who had raised doubts over the allegations of data creditability. It wondered if they were trying to scare away foreign investors at a time when India has become the fastest growing economy in the world.