The war on terror has taken an interesting turn. After a squadron of IAF fighter jets demolished the terror camps situated deep in Pakistan and POK, the terror sponsor is back to their old tricks. Not only did they violate our airspace [even though it went in vain], they also captured an IAF pilot, Wing Commander Abhinandan during the same.

As the government is chalking out all options in order to rescue the braveheart, and the masses are praying for the pilot’s safe comeback, actress Sonam Kapoor posted the following on Instagram: 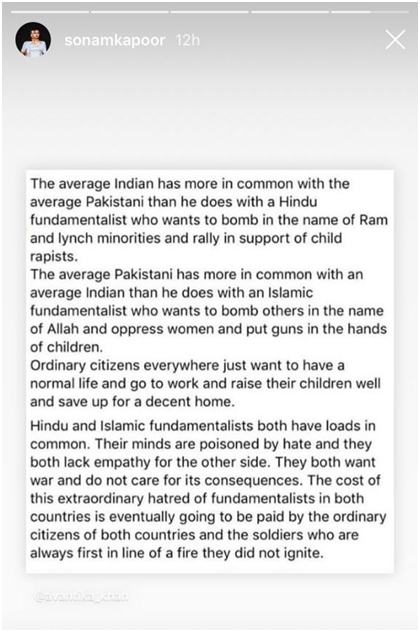 At a time when the nation needs to be one in their fight against terrorism and its sponsors from across the border, Sonam Kapoor has exhibited her Hinduphobia once again by comparing those calling for strict action against the Pakistani perpetrators of the Pulwama attack and now the capture of IAF pilot Abhinandan as ‘Hindu fundamentalists’.

Notice the choice of words she has used for describing a Hindu fundamentalist. Isn’t this precisely the rhetoric that the likes of her had been peddling last year, painting the entire Sanatan Dharma as ‘rape apologist’ in the Kathua case, even when evidences later proved to be otherwise?

It is one thing to be concerned about the bloodshed caused by war; it is another thing to peddle your vicious propaganda in such a disgusting manner. By peddling her immense hatred for the nationalists, and the Sanatan Dharma, Sonam Kapoor has hit a new low, even by her own standards. The Kathua case only proved her hypocrisy, but this post brings out the insensitivity in her personality, which goes hysteric on even a remote possibility of the nation giving tit for tat in cases of cross border terrorism.

Moreover, this is not the first time that Sonam Kapoor has spread her vitriol against the Sanatan Dharma or the believers of the same. Her notorious ‘placard campaign’ on Kathua aside, Sonam Kapoor has been unequivocal in her hatred towards the Sanatan Dharma, even if it is something as harmless as celebrating the festival of Holi. If confronted, she would either denounce them as trolls, or better, quit Twitter when unable to respond to the tough questions put forward by vigilant citizens.

She has no qualms in celebrating the fireworks burst in London during the occasion of New Year, but will develop breathing problems if the same are burst during Diwali in either Delhi or Mumbai. Sonam Kapoor will otherwise be a vegan, but has no shame in supporting people who back the slaughter of cows in order to satiate their taste buds. If hypocrisy could be personified, it would fit the personality of Sonam Kapoor for sure.

Even as she is calling for peace with the Pakistani masses, she seems to completely have ignored the real intention of the Pakistani people, who have no hesitation in celebrating the maltreatment of the IAF pilot. Has she not read what Veena Malik posted on the capture of that pilot? Can we still make peace with those, who celebrate cruelty like this:

Also, as far as we know, Sonam Kapoor has another film lined up, titled ‘The Zoya Factor’, which is to release in April. Is this the same nonsense that she is employing to promote her film, like her ilk did with ‘Veere Di Wedding?’ If true, only God help her and her insensitive approach.