In what comes as good news for the farm sector, the RBI has increased the limit of collateral free loans to 1.6 lakh rupees from the existing 1 lakh rupees for the sector. Last time, the limit of the collateral free loan was hiked in 2010 from 50,000 rupees to 1 lakh rupees. The latest step of the RBI will boost the liquidity in the farming sector and solve the input side credit problem. The step has been taken “keeping in view the overall inflation and rise in agriculture input costs” since 2010. “This will enhance coverage of small and marginal farmers in the formal credit system,” said the RBI. “This will enhance liquidity in the system and will enable farmers to invest more,” stated Shiraz Hussain, former agriculture secretary.

Some bankers and industry analysts were apprehensive about the move as they expect that the increase in the limit for the collateral free loan will only increase the Non-Performing Assets (NPA) in the agricultural sector. However, Mrutyunjay Mahapatra, MD, and CEO, Syndicate Bank said the move will not result in NPA increase. “The hike in limit was essential for farmers, as the support prices and input costs have gone up. I don’t see this move leading to any spike in NPAs,” he said. 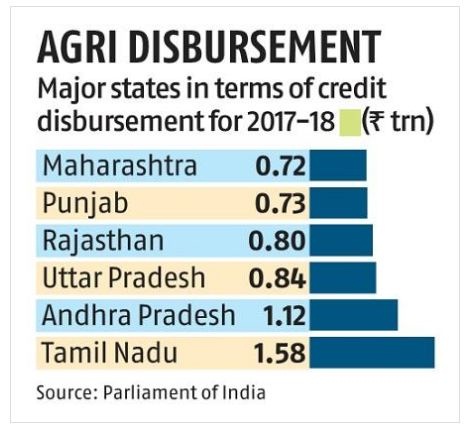 The government has disbursed 11 lakh crore rupees in the form of agricultural loans till December 2018. Majority of these loans have been granted in the states of Tamil Nadu, Andhra Pradesh, Uttar Pradesh, Punjab, Rajasthan, and Maharashtra. There are a total of 6.95 crore Kisan credit cards (KCC) in the country against 14 crore farmer households. The Indian Banks’ Association (IBA) has advised all the banks to remove all the documentation for crop loans up to 3 lakh rupees against KCC.

Earlier in the interim budget 2019-20, the Modi government announced to transfer a direct benefit of 6,000 rupees per year for landholders up to 2 hectares. The total amount allocated to this scheme named Pradhan Mantri Samman Nidhi is 75,000 crore rupees for the year 2019-20. This is to be implemented retrospectively from December 1, 2018.

In its bid to double the farmers’ income, the Centre formed an 8 member inter-ministerial committee under Ashok Dalwai, additional secretary at the Union Agriculture Ministry. The government took various steps on the committee’s suggestions to solve the problem of farm distress. In June 2016, Pradhan Mantri Fasal Bima Yojna (PMFBY) was rolled out for the process of crop insurance. The insurance scheme made farming as secure as any other profession. If crop suffers due to reasons like drought, excessive rain etc., the insurers will be required to pay the output price. To provide irrigation facilities to farmers across the country, the Modi government launched Pradhan Mantri Krishi Sinchai Yojana (PMKSY) and pumped money into the National Bank for Agriculture and Rural Development (NABARD) to increase the credit penetration to farmers. The steps taken by the government coupled with good monsoon proved beneficial for agriculture and the sector grew at 6.3 percent in 2016-17. However, growth moderated to 3 percent in 2017-18 due to the high base effect. In the first quarter of the previous financial year, agricultural growth was 5.3 percent compared to 3 percent in the same period of last year.

The government is trying to solve the post-production problem through incentivizing exports. As India produces more than it consumes, the price of agriculture produces crashes and this could be solved by encouraging exports. The government plans to introduce country-specific special agricultural produce zones to boost agricultural exports. In FY 2018, the exports of agricultural commodities reached $ 38.74 billion against imports of $ 24.89 billion. It has resulted in a farm trade surplus of $ 13.85 billion. The surplus for 2016-17 and 2015-16 was $ 8.05 billion and $ 10.23 billion respectively. The latest step by the RBI to increase the limit of collateral free loans to 1.6 lakh is set to assist the farmers further and will boost the sector as a whole.