‘Madam please don’t send us to tribunal’, the massive effect of Insolvency and Bankruptcy Code

The cultural change in how businesses work in the country is visible after the implementation of Insolvency and Bankruptcy Code (IBC). Earlier the lenders had to chase borrowers to ask back the loans due to lack strong bankruptcy law. Now the borrowers fear that their companies could be liquidated through IBC if the loan is not paid back. “The first thing they say when they come to us is ‘Madam please don’t send us to NCLT,’” said Anshula Kant, a managing director overseeing stressed assets at State Bank of India. The National Company Law Tribunal (NCLT), oversees bankruptcy cases. If the founder is “genuine we don’t want him to lose the company,” she said.

The IBC has helped the banks of the country to recover the loans. In the case of public sector banks, it is like taxpayers of the country got their money back from intentional defaulters. The bad debt ratio of the banks in the country has been reduced to 10.8 percent in September 2018 from 11.5 percent six months earlier. For the State Bank of India, bad debt ratio is 9.95 percent. So far 3 lakh crore rupees has been recovered from loan defaulters due to IBC. 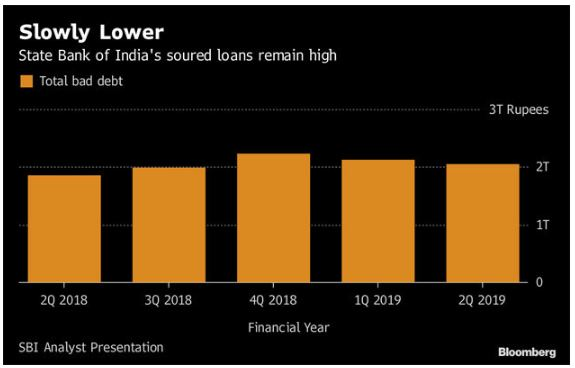 The gross NPA of the country is INR 10 trillion rupees which is equal to 6 percent of the economy of the country or equal to the GDP of West Bengal. India has the second largest share of bad debts in the world with 11.5% NPAs of total loans. Only Italy is ahead of us with 16.4 % of NPAs, while other major countries like the US, China, and Japan have 1.1, 1.7, and 1.3% of NPAs respectively. The huge NPAs hurt the lending capacity of banks and credit crunch took a toll on economic growth. The government has to put 2.11 trillion rupees in public sector banks to revive the credit and push capital adequacy to Basel III norms.

The cases started flowing to National Company Law Tribunal (NCLT) from January 2017 and as of September end 212 cases have been resolved through liquidation and 50 cases have been approved for resolution. In the last two years, almost 2,000 cases were submitted for resolution to NCLT. The creditors have been able to recover almost 58 thousand crore rupees out of claimed 1.26 lakh crores. The recovery rate is around 46 percent in comparison to 26 percent in the Pre-IBC era. Out of total NPA of 10 trillion, 4 trillion is expected to pass through IBC by 2019.

India had ‘socialism without entry’ before economic liberalization in the early 1990s. This had a negative impact on the economy and gave ‘Hindu rate of growth’ to the country. The problem was solved in the early 1990s as the country moved towards a capitalist economy with the advent of economic liberalization. However, the larger framework of the political economy of the country remained ‘capitalism without exit’. The lack of a proper framework for insolvency amassed huge Non-Performing Assets (NPAs) which hampered the health of the banking sector as well as the growth of the economy. Modi government brought path-breaking policy as an Insolvency and bankruptcy Code (IBC) to solve capitalism without exit problem.