The video shared by him is morphed and it was declared as fake by Gonda police. The VHP activists were protesting against Pulwama terrorist attack. The police clarified that no anti-national slogans were raised and also rubbished the video posted by Zubair as misleading and fake.

Fact checkers of propaganda site Alt News is spreading fake news through a misleading video which was already cheched and clarified by Gonda Police.

Even after his lies were exposed, the so-called fact-checker has still not deleted the video, and Twitter has also not suspended his account. On the other hand, Twitter has suspended the account of Squint Neon with the speed of light for no clear reasons. Innocent Twitter handles are getting banned and on the other hand, Twitter users like Zubair spread fake news openly without any fear of getting banned or unpublished by the social media giant whose liberal bias is the stuff of legends now.

Zubair is the co-founder of Alt News and runs a notorious FB page ‘Unofficial: Subramanian Swamy’ which is way more vicious when it comes to peddling fake news. In the run-up to the Karnataka elections, they had published a fake image of BS Yeddyurappa, the then BJP candidate, as celebrating the birth anniversary of Tipu Sultan, whereas he was just attending an Iftar party organized by some minority organizations.

In July 2017, his page posted a picture claiming that Kashmiri youths helped the injured Amarnath yatra victims at Anantnag Hospital. However, the reality was that picture posted was of a youth injured during Khudwani protests being attended at a hospital in Anantnag, 2016. 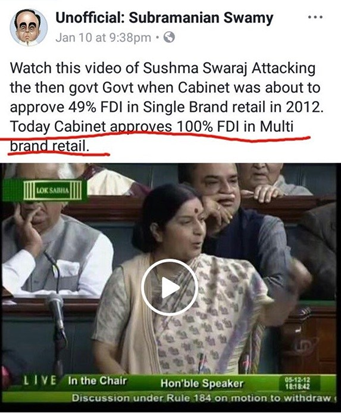 Pratik Sinha is the founder of Alt News. His website is extremely notorious for peddling fake news in order to give their ‘masters’ a political edge. This portal is funded by notorious leftist Arundhati Roy’s Zindabad Trust.

Be it discrediting the account of a journalist who didn’t find Umar Khalid at the site when he was allegedly attacked with a pistol, or accusing army veteran and Republic presenter, Major [retired] Gaurav Arya of peddling ‘fake news’ on the violence against Gorkha protesters in Bengal, or trying to justify the anti national slogans raised in a Bihar rally [before their claims were busted by the Bihar DGP], you name it and Alt News has done it.

Journalist associations jump to Barkha Dutt’s rescue, yet no word on Republic journos