In a recent survey conducted by India Today group, Uttar Pradesh CM Yogi Adityanath has emerged as the most popular chief minister in India. Ever since he assumed power in Uttar Pradesh, Yogi Adityanath has had a topsy turvy ride in his current tenure, which is soon to complete two years in office. While his strict implementation of law and order and his educational reforms have won the hearts of the entire state, the unapologetic stance he takes on national politics has invoked the ire of the left-liberal intelligentsia.

However, if we go by the India Today Mood of the Nation Poll, Yogi Adityanath’s popularity as the CM has only increased. Approximately 57% of the residents of UP, as per the survey, are satisfied with his government’s policies, while 40% of the population considers him as the best CM of India, as per the same. The other options included in the survey were that of Telangana’s CM K. Chandrasekhar Rao, West Bengal’s CM Mamata Banerjee, Odisha’s CM Naveen Patnaik, and Bihar’s CM Nitish Kumar.

Approximately 2500 people participated in this survey, conducted primarily in UP as a tool to gauge the sentiments of the masses months before the upcoming Lok Sabha elections in 2019. As per this survey, the people have rated Yogi Adityanath’s tenure on the scale of 3.57 out of 5.

57 percent of the people were either satisfied with his governance or were very appreciative of his administration. 27 percent were neither satisfied nor disappointed with his tenure, while 15 percent of the people who participated in this survey were critical of Yogi Adityanath’s tenure. Following is a graph of how the participants of the survey responded:- 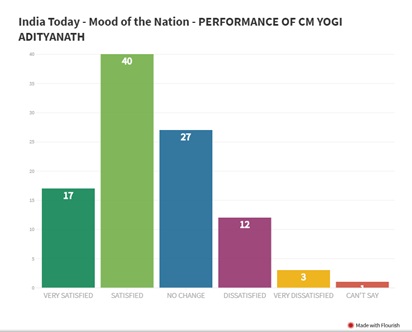 This is quite great, as a similar survey was conducted in 2017-18, where 30% of the people responded positively about Yogi Adityanath. Though the figure is slightly low compared to a midterm survey in August, the India Today’s survey, which was under criticism earlier for barely giving BJP 5 seats in contrast to the SP–BSP–RLD alliance, has accepted the popularity of the UP CM, which is growing manifold.

The survey isn’t far from the truth either. Despite the muckraking by the opposition, Yogi Adityanath is performing exceptionally well when it comes to delivering good governance, i.e. strong law and order apart from a robust educational system.

The way, he has given a free hand to police, who can arrest any anti-social element without fear, has increased the confidence of UP Police, as well as has given them their long lost respect among the masses. UP, which was once as notorious as Bihar in terms of rampant cheating in the examinations, is now relatively free from that blemish.

Besides, it is under his tenure that the cities of Prayagraj and Ayodhya Dham [earlier Allahabad and Faizabad respecitvely] have been restored to their original names and prestige. A vocal supporter of the Ram Janmbhoomi complex, Yogi Adityanath has brought back the iconic Diwali celebrations, which were suppressed in Ayodhya earlier. As such, the India Today survey only indicates a promising future for this firebrand nationalist, who aims to restore the status of India as the erstwhile ‘Vishwa Guru’.