No Result
View All Result
Newswire
Aurat Marches to take place across Pak 28 mins ago
TN polls: CPI-M, CPI to contest 6 seats each in DMK alliance 31 mins ago
Gurugram: Only 400 of 58,580 recovered patients donated plasma 31 mins ago
Meghan says Kate Middleton made her cry, not other way round (2nd Ld) 31 mins ago
Akhil Bharat Hindu Mahasabha to contest UP Panchayat polls 37 mins ago
Uzbek & Indian soldiers to start anti-terror drills on U’khand hills 37 mins ago
Next
Prev

In a bizarre move, to be honest, the Aligarh Muslim University (AMU) has issued a notice to the AMU students for conducting a Tiranga Yatra on campus. If the students don’t respond to this notice, the officials have also warned of strict action against the same.

On Tuesday, led by one of the students of the university, Ajay Singh, a bike rally was conducted in the premises of AMU, which began from Education Department and ended at Baba Syed Gate. The Tiranga Yatra was organised in the memory of the sacrifice made by freedom fighters. Given that the Republic Day is coming close, the procession became all the more significant.

However, in an outrageous but not entirely unexpected manner, the AMU authorities sent a notice to the students who conducted the yatra. They also threatened the students with ex parte action should they fail to respond effectively to the show cause notice. 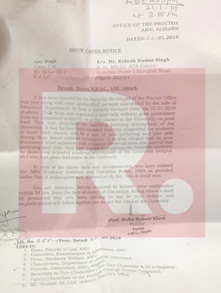 Yes, let this sink in. Of all things, waving the national flag or the Tiranga is an act of ‘indiscipline’, and cannot be done without the permission of the Aligarh Muslim University officials. They have no problem with the continuous propaganda peddled against India within the campus but would be miffed by the celebration of patriotism within the same. Angered by the hypocrisy of the university officials, who did nothing when students conducted prayers for the terrorist Mannan Wani, who was shot dead by the Indian armed forces, Ajay Singh, the main organizer, responded, “This is not the first time the rally happened. They had denied yesterday for conducting the rally. Why haven’t they given us the permission to conduct the Tiranga Yatra? Why are they opposing Tiranga Yatra? It is our country. We will do the Tiranga Yatra here only. Do we have to go to Pakistan?”

To be honest, Aligarh Muslim University has been a breeding ground for separatist politics ever since it was founded in 1875. As such, they are hostile to any kind of change that can transform the institution for the better. This is not only outrageous, but also ridiculous to say the least since AMU is practically aiming to stop a rising storm with a broom. The question is, for how long?