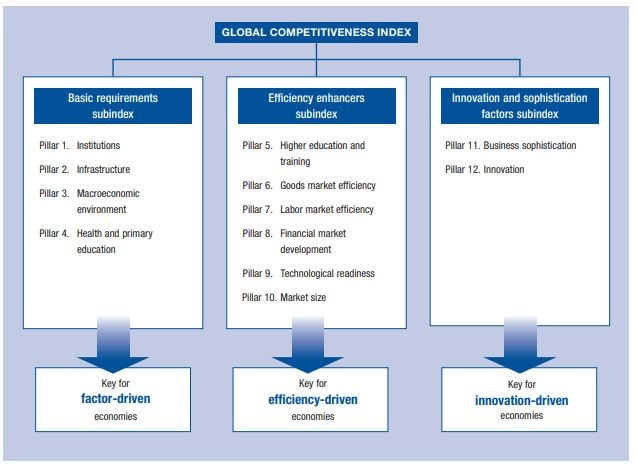 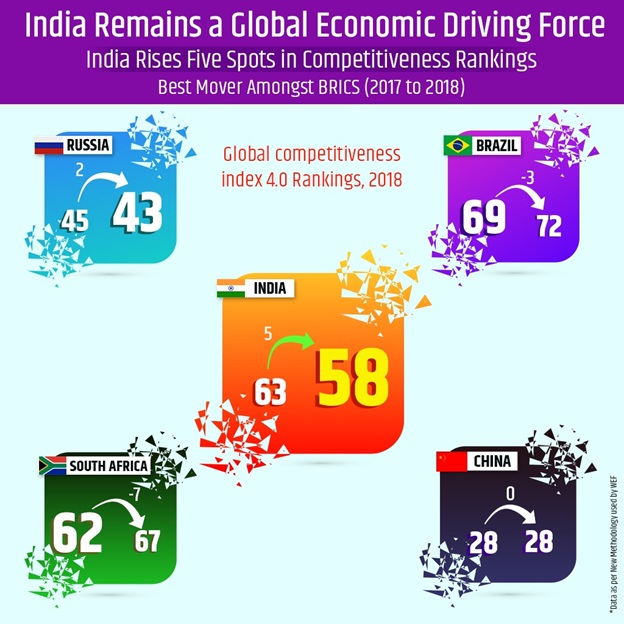 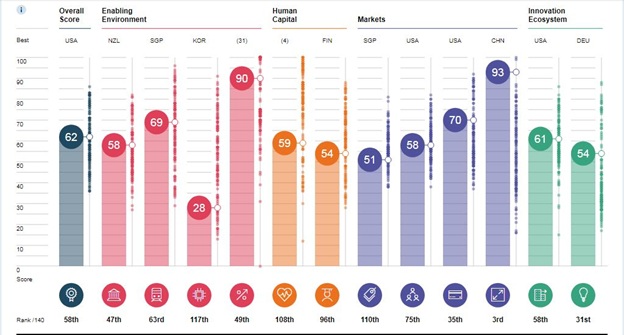 India is the best mover among the BRICS nations in the latest Global competitiveness index report. The ranking of South Africa and Brazil made southward move by 5 and 3 ranks respectively- South Africa slipped to 67th place from 62nd while Brazil slipped to 72nd from 69th. Russia improved its rank by 2 places moving up to 43rd from 45th while China maintained its place (28th) without any change. China and Russia rank above India in the 2018 index while Brazil and South Africa rank below India. As far as providing institutions to enable the environment component, India ranked best among the BRICS nations. The ranking of institution is based on aggregation of reliability of police services, budget transparency, freedom of press, corruption, social capital, legal framework etc. 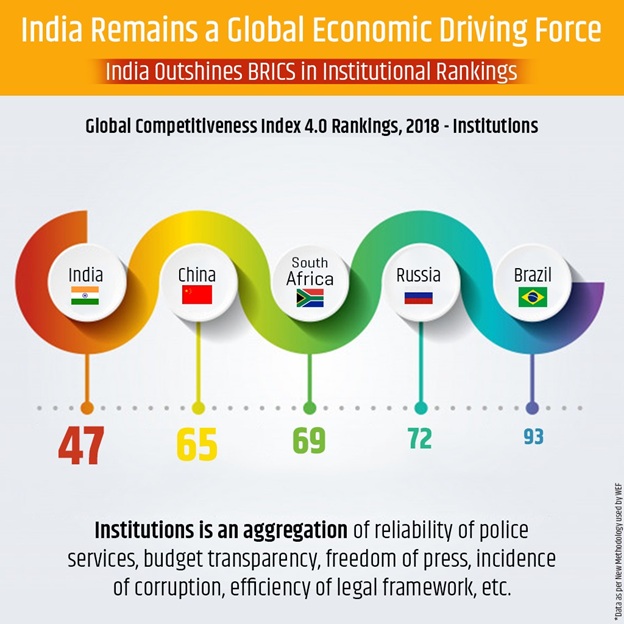 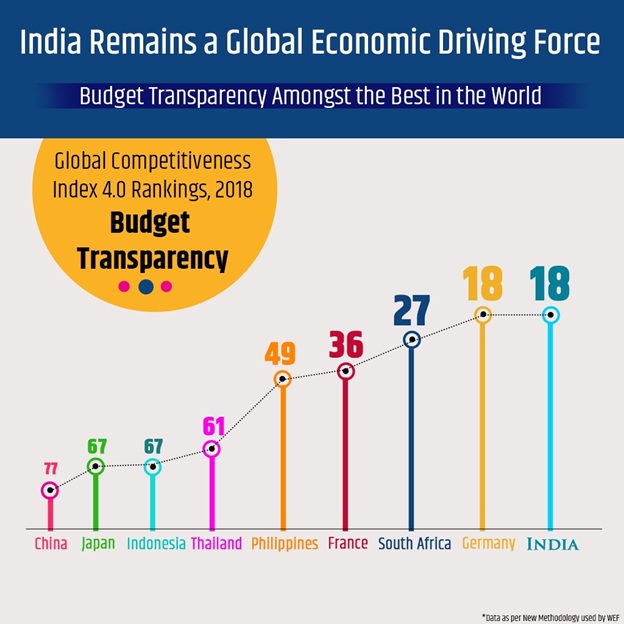 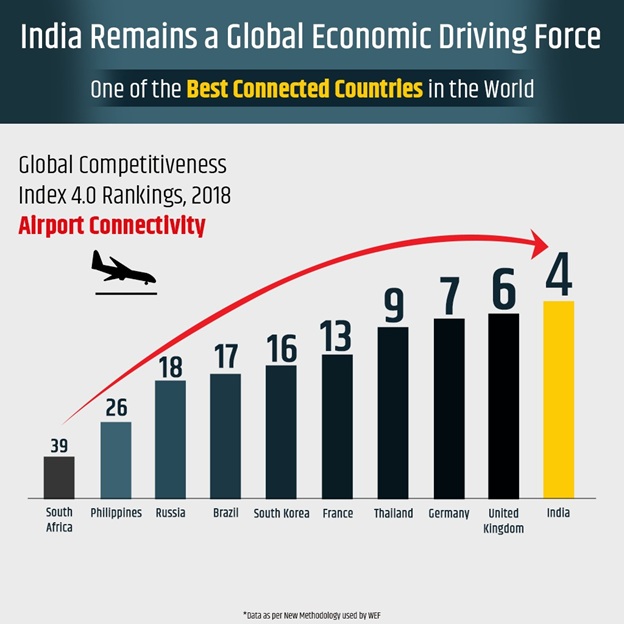 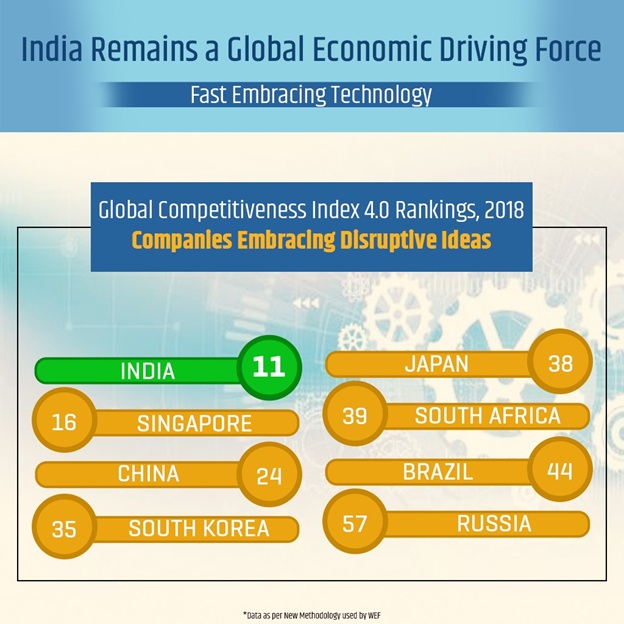 On the markets front, India ranked third, just behind China and the United States. One of the major improvements in last few years has been in the field of airport connectivity in which India ranked 4th this year, ahead of Brazil, Russia and South Africa.  Brazil, Russia and South Africa were ranked 17th, 18th, and 39th respectively as far as airport connectivity is concerned. In the field of companies embracing disruptive ideas too, India performed better than other BRICS nations notching up to the 11th rank. As far as quality of research institutes is concerned, the country ranked ahead of all BRICS nations except China with quality of institutes higher than many developed nations like France, Singapore, and Japan. India’s ranks were best among BRICS nations in financing the Small and Medium Enterprises which is considered to be the backbone of rural and small town economy. India bagged 16th rank while China, Russia, and Brazil were ranked 31st, 106th and 110th respectively. In terms of Budget Transparency, the country ranks 18th ahead of countries like South Africa, Japan and Thailand.

The major areas where the country needs to improve are Human capital- health and skills, Labor market, Product market and Information and Communication Technology (ICT) adoption in which India ranks 108th, 96th, 75th, 110th and 117th respectively. The ranking on health and skills is expected to improve in the years to come, as the Modi government has implemented Ayushman Bharat, the largest healthcare insurance scheme in the world. It aims to cover 50 crore people. With the scheme ‘Skill India’ reaching in later stages, the skill of human capital is also poised to improve.

The other things which India needs to work really hard on include; labor market reforms, effective exit policy, delays at customs and red tapism. These have been some of the biggest hurdles that have prevented India from getting benefited out of its low wage and surplus labor advantage. The labor laws in the country are one of the worst in the world matching those of socialist countries like Cuba. Labor reforms should be the next big priority of Modi government if it gets majority in both the houses. The product variety is set to expand with the expansion of the economy and opening of FDI regimes, thus it’s not a big problem for the country. On the front of ICT adoption, the methodology used by World Economic Forum seems flawed because it does takes into account the mobile internet penetration and ranks countries only on broadband penetration. Therefore, the only area which Modi government needs to work urgently is labor market reforms and the rankings are set to improve further in the upcoming years.