In a major embarrassment for The Wire, a leftist and anti-BJP/ anti-Modi portal, it has deleted a video in which Abhisar Sharma made a bizarre claim about the Amritsar train mishap that occurred at the time of Dussehra evening. In that video, Abhisar Sharma had claimed that the top light of the DEMU involved in the mishap that resulted in the death of more than 60 people who were on the tracks in view of Dussehra celebrations nearby, was not working/ was absent and this might have caused the horrific accident. 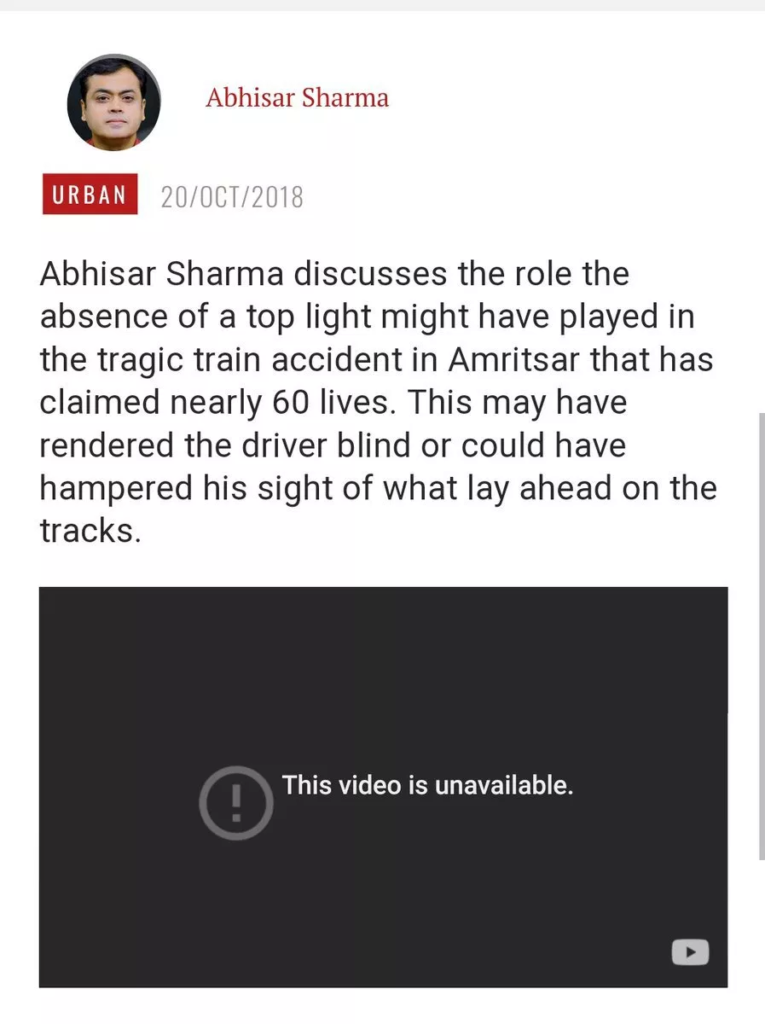 Journalist Abhisar Sharma peddled a lie while speaking for The Wire. He tried shifting the blame for the tragedy that unfolded during the Ravan effigy burning event on the Railways and claimed to have found the ‘smoking gun’. He alleged that the top light of the DEMU involved in the mishap that day was not working. Abhisar then implied that since the top light was not working and therefore, the vision of the loco driver must have been hampered. He also raised the question whether the accident took place because of malfunction in its top light. Thereafter, he played a video clip with a train whose top light is turned off and claimed that it is the same DEMU, Jalandhar-Amritsar Express.

He then vociferously questioned the union Railways minister about the imaginary malfunction in the top light and alleged that a number of accidents takes place only because the top light of the concerned train might not be working. He also argued that even the train driver should come under the scanner.

Abhisar Sharma was caught red handed lying through his teeth since there was no question of malfunction in the top light, there being no top light in the concerned DEMU. Abhisar Sharma was confronted on Twitter as well. The defence that was raised by Abhisar was as absurd as his top light theory. He argued that if there is no top light in the current models, it does not augur well for Rail safety as the people on the track cannot see the train unless it has a top light from a distance. This argument is bizarre on several counts. Firstly, beam lights are meant for the vision of the train driver and not for people on the tracks. Secondly, the loud train horns and sirens which make its arrival more than evident. And lastly, the vibrations generated by the high speed of a train give a clear indication of its arrival.

Hey Sherlock, this is the locomotive of TGV, world's fastest train. See where its lights are. I guess the French engineers didn't put the lights there just randomly. pic.twitter.com/4blK67j0Xd

Now, The Wire has deleted this absurd video fearing widespread backlash. But it has not tendered any apology to the victims or their families for trivialising and politicising the grave and heart wrenching tragedy. It has not taken any action against Abhisar Sharma either. The way he indulged in blame game and peddled lies without caring for the sensitive nature of the tragedy inflicted by the mishap, is a ground for his dismissal. The Wire must set a better precedent for itself by sacking Abhisar on the ground of peddling fake news.