by Rohan Sachdeva
in TFIUvaach
0

Using facts to mould reality is perhaps the greatest skill of our time, where the same piece of information can be conveyed in a manner that tells an entirely different story.

The Quint, one of the leading sources of fake news and hit jobs in the Indian media today has come up with yet another article targeting Piyush Goyal.  Piyush Goyal’s shoulders bore a considerable burden of PM Narendra Modi’s promise given from the Red Fort on 15th August, 2015. The promise was direct and simple, with the assurance of the electrification of the 18,500 villages which didn’t even have electricity lines till 2015. Electricity being a basic need, the idea that there were almost 18,500 villages that were in the dark with sundown is an appalling one. The hand of the Congress had deprived the villagers of India this basic need for a long time. Piyush Goyal accepted this challenge on behalf of PM Modi and began the largest electrification drive in the history of India. The challenge was to complete the given task in 1,000 days or less.

In an article published in The Quint, the author has suggested that the images used by Piyush Goyal to demonstrate the successful distribution of electricity throughout rural India were actually meant to highlight the ‘spread of population’ throughout India, and not the electrification of villages. The premise for their argument is absurd and baffling, and lacks any iota of common sense. The images were released by NASA in 2017, showing the change in the imagery of ‘night lights’ in India. Is the Quint silly enough to forget what powers these lights, or are they conveniently selecting facts to mould reality? Moreover, the snippet of the URL of the article is “piyush-goyal-fake-images-on-twitter-show-electrification-of-indian-villages“. While the Quint hasn’t called the images fake anywhere in the article, the mention of the word ‘fake’ in the snippet of the article’s URL is extremely misleading and blatantly false.

Coming back to the essence of the message in Quint’s article, the author has wrongly attacked Piyush Goyal as if the Power Minister used a wrong image that isnt relevant in the context of his Tweet, which celebrates the success of the electrification drive. Even if we assume that the images are merely showing ‘spread of population’, that spread of population is clearly accompanied by supply of electricity which is evident from the images.

The Quint is using the tweet as a baseless attack on the success of the electrification drive and on Piyush Goyal, without challenging the actual figures. Going after a tweet rather than posting their own counter facts is a sign that they really don’t have a counter. It is irrelevant what the images were SUPPOSED to show, when it only takes common sense to infer that there is stark contrast in the night sky of previously darker rural areas. Even if the images show urbanization, the supply of electricity is a pre requisite to urbanization.

In a piece by National Geographic from April 2017 titled “New Nighttime Map Shows Earth in Whole New Light“, the description states “Comparing satellite data from 2012 and 2016 reveals where the planet has dimmed and brightened.” The article goes on to say “That India has brightened dramatically, as shown by all the blue in the image below, is also not a surprise. The country is home to more than its fair share of people living without electricity, and its government has been working to change that by establishing a rural electrification program and investing heavily in renewable energy. There is still a lot of work to be done, but the results are already easy to see on Nelson’s map”. It must be noted here that the article was written last year, hence the assertion that ‘there is still a lot of work to be done’, and that work has been done in under a year’s time since.

In the earlier image, it is clear that the lights are solely concentrated around the urban areas, in contrast to the distributed lights in the second image.

Under the decisive leadership of PM @NarendraModi India has finally been able to electrify all its villages before the set target date. With the elimination of darkness from the lives of fellow Indian villagers, we commit ourselves to building a new and #PowerfulIndia pic.twitter.com/TJ8irmx4tk

The learned writers of The Quint forgot that there is one more credible portal to check the claims made by Piyush Goyal- the dashboard of garv.gov.in, a portal which throughout the last 4 years displayed the electrification progress taking place in villages across India. The portal as of 29th of April onwards under the head “To be electrified” stands at 0, where it will remain for the years to come. The number of electrified villages according to the portal stands at 18,374. Six percent of 1,270 uninhabited villages too have poles and wires passing through them as of today. The dashboard also displays a figure prominently before these achievements of the BJP government in Centre. This was the BJP government’s goal as well as the showcase of Congress’ failure. Despite 60 years of Congress rule in the Centre, almost a staggering 20,000 villages didn’t have access to electricity. Do we even need to speak more about the negligence meted out to villages by the ‘hand’ of Congress?.

Some overenthusiastic liberal and intellectual reporters like Swati Chaturvedi ‘@bainjal” and Mukesh Kejariwal “mukesh_k” also took to Twitter to mock the claims made by Piyush Goyal. They too, however, were ill equipped to counter the facts and instead chose to mock the tweet rather than challenge the facts. This is atypical ‘liberal’ and ‘free thinker’ behaviour on display, that when presented with facts, they go rogue and get personal, trying to discredit the individual or organisation rather than counter the actual claims made. Aam Aadmi Party’s media manager Vikas Yogi @vikaskyogi , also shared a tweet challenging Piyush Goyal’s claim.

Their narrative vs reality :

Dear Piyush the image is a mass circulated #fakenews your claim is not based on facts. Your electrification is at the same rate as the UPA https://t.co/j8JQAZZWLp 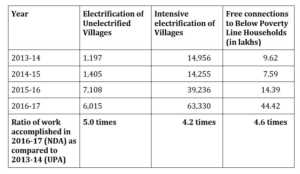 A basic need for today has been fulfilled by the BJP government,  and we can only hope that the darkness of ignorance and false information is wiped out the same way the dark nights of rural India have been lit up.

Secular narrative returns as we’re asked to be ‘ashamed’ for Kafeel Khan.