Bollywood is back at it again, and we’re getting tired of the selective outrage

In the aftermath of the Kathua rape case, we witnessed another phony outrage by the self-appointed moral guardians of society. However, none were as revolting as the placard carrying actors from Bollywood. As an industry, Bollywood perhaps has the most notorious record when it comes to matters of law and order. From convictions for carrying illegal weapons to killing animals of endangered species, Bollywood’s record over the years has been woeful. From casting couch to abusive relationships, Bollywood’s conduct towards its women has been distasteful at best.

However, during all this time, the stars of Bollywood could not muster their voice to speak up against the devils in their midst.

When Bollywood did manage to muster its voice, it was only to malign an entire community and its religious symbols. One actress, who has named her son after a genocidal maniac who reveled in the sexual exploitation of women, was also seen carrying a placard. Another actress whose father can be seen beside Dawood, the dreaded underworld don, in pictures that are doing the rounds on social media, was also seen carrying a placard that appears to target the Hindu faith more than the actual perpetrators of the heinous crime. 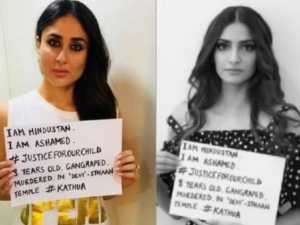 Any comments @sonamakapoor? You condemded a heinous crime(I appreciate) but gave it a communal twist "Fake Hindus " .
Kindly do the same for all . How can you blame an entire religion for this Rape.
These victims are ours too! ?#justiceForAll ? pic.twitter.com/8tFtLWT1tL

Koena Mitra, to be fair, gave a fitting reply to her colleagues in the entertainment business.

The palpable anger against Bollywood is primarily because of their selective outrage over a crime as heinous as rape. The industry appears to believe that every crime against women, including what happened at Kathua, is an opportunity for them to showcase to the world their moral superiority over everyone else and for a PR campaign to enhance their reputation. The industry engages in an organized form of selective outrage only when there is no possible chance for one of them to be implicated.

Hear a media firm was behind the campaign by Bollywood to defame Hindustan.

If true, Case must be booked under National Security against all of them & source of funding of Media firm be found.

The consequence of the phony and selective outrage by the Bollywood industry, which has a major problem with sexism, has been the deflection of attention from the core issue at hand and the polarization of a crime as heinous as rape. Stars from the movie industry are so used to staying in public eye that they can’t even bear to have media attention taken away from them by an 8-year old victim of rape. Thus, they are compelled to stir up a storm on social media by attacking the core tenets of a person’s faith to ensure that even during such morbid circumstances, the media glare is always on them.

The father of modern propaganda, Edward Bernays, once remarked, “The American motion picture is the greatest unconscious carrier of propaganda in the world today.”
Hollywood still continues to be littered with propagandists as events since the rise of Donald Trump has revealed and it appears that Bollywood has always been the same as well. And their propaganda seems to have intensified since Narendra Modi assumed the seat of the Prime Minister of this country. The movie industry springs into action only when they are assured that their conduct will be approved by the party line. And their hypocritical conduct has not escaped the notice of the common folk.

Indeed, things were going well for the Congress party until the establishment was activated to attack the Bharatiya Janata Party post Kathua. In their hurry to immerse themselves into action, they dragged symbols of the Hindu faith into their organized campaign. The movie industry appears to be the polar opposite of Midas, whatever it touches turns to faeces.

Bollywood and media portray ‘Hindu’ as rapist,and Hinduism as the issue