Nelson Mandela, Was he really so saintly?

by Ankur
in History
0

A saying goes that “Of the dead, say nothing but good.” But is stating the facts which are contrary to oft repeated fables bad mouthing? Or should we just whitewash their crimes in the name of respect for the dead? Let’s talk about Nelson Mandela for instance, who is often promoted as a nonviolent protester who was locked away for 27 years by the racist apartheid South African government. A kind grandfatherly leader, who couldn’t hurt a fly.

Well he hurt a lot more than just flies. Such as soft targets like women and children.

Nelson Mandela was not jailed for 27 years, for non-violent anti-establishment movement as the media has been saying all these years.

African National Congress, which today is the most powerful party in South Africa, did not have its beginnings as a political party, but as an armed resistance organization.  Nelson Mandela was the co founder and leader of the armed wing of the ANC, called Umconto wa Sizwe (Spear of the nation). Its primary task? Hitting civilian and other soft targets and carrying out maximum destruction.

And he directed his violence from behind the bars as well, including the 1983 Church Street car bomb that killed 19 people.

And another myth propagated is that he fought his ‘struggle’ via nonviolence or Ahinsa of Mohandas Gandhi all his life and emerged triumphant in the end. Yes he did try non violent methods. For three months to be precise, and then cast them away and returned to his old violent ways. ANC originally adopted a policy of passive resistance against apartheid, but later embraced violence against the military and white civilian targets, when it was infiltrated and captured by Nelson Mandela and Co.

Every black liberation figure was communist propped, be it Martin Luther King, Jomo Kenyatta, Rosa Parks (forget about being the first woman to refuse to vacate her seat for whites, she wasn’t even the first in her town to do that) or Nelson Mandela.

Nelson Mandela was no different than any other black figure propped up by the communists, in addition, he was a disciplined member of the Communist Party i.e. in this case, the South African Communist Party (SACP). He denied it in the 1958 trial, and till the end of his life. But proofs and evidence points to the opposite direction, which includes previously unavailable SACP records; government archives of Communist countries; memoirs and biographies of, and interviews with, SACP and ANC members of the period. 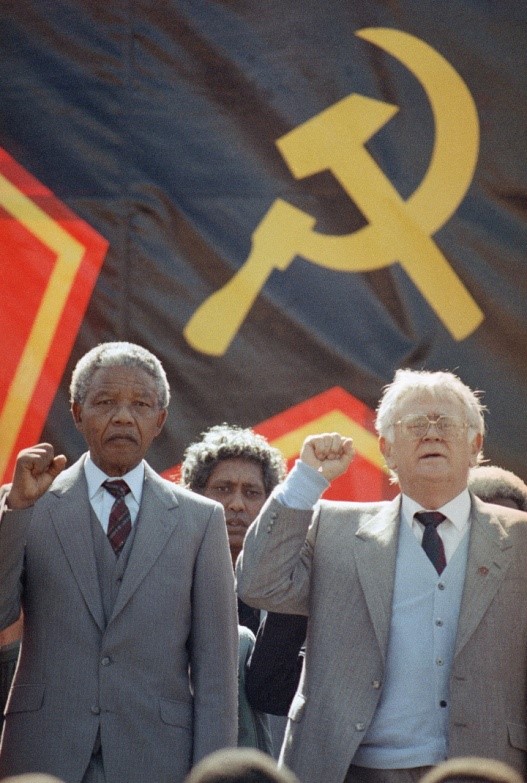 SACP, outlawed since 1950, was, and remains, a hardcore Marxist-Leninist organization, where all members must pledge unquestioned obedience to the will of the Party, as determined by its Central Committee. It took orders from the Communist Party of the Soviet Union (CPSU), making it an agent of a foreign power. Its members, led by Nelson Mandela, secretly took control of the ANC, relegating ANC leaders committed to reform and change through peaceful, political means (so much for his so called Gandhian methods).

Nelson Mandela and 150 other opponents of apartheid were arrested in 1956 on charges of treason in a trial lasting five years. All defendants were acquitted in 1961, but by then he was on the road to violence. Post the trial, he formed Umkonto va Sizwe, which aimed coordinated sabotage campaigns against military and government targets, and even guerrilla warfare. He was arrested again in 1962 on charges of organizing labor strikes and attempting to leave the country illegally. He was sentenced to five years in prison, but on further charges of overthrowing the government and was sentenced to life imprisonment in 1963. He was released in 1990 fearing an imminent race civil war across the country.

As mentioned before, Nelson Mandela led the Umkhonto we Sizwe (MK), the armed wing of ANC, which was also controlled by SACP, and its cadre were trained in South Africa, China, and other Communist “Frontline States” — Zambia, Angola, Mozambique, Tanzania, Zimbabwe — by Soviet, Chinese, East German, Cuban, Czech, and other Communist instructors. Nelson Mandela was a top SACP leader and he went on to lead ANC later on. So to say that he has had no part to play in the innumerable acts of torture and murder committed by ANC mobs is both delusional and devious.

One of his quotes:-“Under a Communist Party government, South Africa will become a land of milk and honey. Political, economic and social rights will cease to be enjoyed by whites only. They will be shared equally by whites and non-whites. There will be enough land and houses for all. There will be no unemployment, starvation and disease. Workers will earn decent wages; transport will be cheap and education free.” We all know how well this quote works out.

Among his ideals were Castro, Marx and Nehru, but he studied the works of Karl Marx, Vladimir Lenin and Mao Zedong – and agreed with many of their ideas.

ANC and MK didn’t wage a struggle to uphold the rights of the Africans. They exploited the miserable conditions caused by apartheid, racism and colonialism to further the objectives of the Marxist Leninist ‘international revolution’. Their terror torture and massacre was directed against South Africa’s blacks much more than the Boers.

Here is the non violent saint singing “Kill the Boer” with another saint, Jacob Zuma, the current SA president:-

In 1985, the South African government offered to release him if he left the path of violence. He refused. “Not only did Nelson Mandela refuse to renounce violence, Amnesty refused to take his case stating “[the] movement recorded that it could not give the name of ‘Prisoner of Conscience’ to anyone associated with violence, even though as in ‘conventional warfare’ a degree of restraint may be exercised.”

ANC lynch mobs victims (which are in hundreds) were primarily black, sadly. Nelson Mandela even suggested cutting off the noses of blacks deemed collaborators. His second wife, Winnie Mandela, was caught on video saying, “With our boxes of matches and our necklaces we shall liberate this country!” Winnie has been convicted in the deaths of hundreds of such killings, but not only did she not escape justice, she still remains in the core committee of the ANC.

And what is necklacing? Textbook definition is as follows: – Necklacing is the practice of summary execution and torture carried out by forcing a rubber tire, filled with petrol, around a victim’s chest and arms, and setting it on fire. The victim may take up to 20 minutes to die, suffering severe burns in the process.

The thousands of victims tortured brutally to death by ANC mobs and the many thousand who continue to die are persona non-grata for the media and world leaders, just like the Kashmiri Pandits, Yemenis and Pakistani Hindus.

Two of the ANC’s biggest donors, in the 1990s, were Colonel Muammar Gaddafi of Libya (USD 10 million) and President Suharto (USD 60 million) of Indonesia . Not only did Nelson Mandela overlook their horrible human rights records but as the South African president, he diplomatically defended them and awarded them South Africa ‘s highest honour in 1997. He maintained close ties to Cuban dictator Fidel Castro and backed Palestinian terrorist leader Yasser Arafat. He supported Nigerian coup leader Sani Abacha, refusing to say a word publicly to stop the 1995 hanging of activist Ken Saro-Wiwa.

Under Nelson Mandela, South Africa became a one party state , and what is shamelessy being called as the rainbow nation has one of the highest rates of crime in the world, leading in murder and rape. Brutal slayings of boer farmers as well as Indian origin immigrants are fairly common, very convincingly swept under the carpet by the media.

And what to say about our Indian government, who never found real life saints like Baba Amte worthy for the Bharat Ratna, but readily gave it to international terrorists like Yasser Arafat or a someone like Nelson Mandela.

“The world has been sold a bill of goods about Nelson Mandela. He wasn’t the saintly character portrayed by Morgan Freeman. He wasn’t somebody fighting for racial equality. He was the leader of a violent, Communist revolution that has nearly succeeded in all of its grisly horror.”

Netanyahu’s Bollywood Event: Why Khans chose to skip it?