[Shocking] Pakistan luring Gullible Youths from Punjab, Using them against India in the name of Khalistan

Less than a month after PM Modi’s Canada trip in April 2015, more than 1,50,000 Canadian Sikhs unanimously passed the Punjab Referendum Resolution in Toronto. These Sikhs called for global support to Referendum 2020, the demand of a separate country of Khalistan- ruled and governed by Sikhs only. On the 30th anniversary of the military operation at Golden Temple, Sikh separatists gathered in front of UN and announced a referendum for the Sikh diaspora in 20 countries in the year 2020.

A website called Referendum 2020 reads- “Actively and peacefully advocating the call given by SFJ to hold referendum for Sikhs’ right to self determination and to liberate Indian Occupied Punjab”. The words “Indian Occupied Punjab” suggest that the main idea of Referendum 2020 is to liberate only the Indian Punjab for the Sikhs, while the Referendum does not show any concern about the Pakistani Punjab or towards Pakistani Sikhs who are evidently living a more miserable life than their Indian brethren.

During the last two years, at least 5 Hindu leaders were brutally murdered in Punjab:-

On November 7, 2017, CM Amarinder Singh announced that Punjab Police has solved the murders of Hindu leaders.

Breakthrough in targeted killings with arrest of 4, conspiracy was hatched by #ISI on foreign soil to spread communal disturbances (1/4).

Ludhiana, Khanna & Jalandhar targeted killing cases solved with their arrest. 1 of the 4 suspects was a gangster lodged in jail (2/4).

They were using encrypted mobile software/apps for communication with handlers based in Pak, western countries; were trained abroad. (3/4)

Congratulations to the Punjab Police for their excellent work in nabbing these men and solving the untraced cases (4/4).

The interrogation revealed that Ramandeep selected the victims himself and carried out the murders on the behest of ISI and some leaders of Khalistan Liberation Force who have supposedly taken refuge in Pakistan. The prime objective of these murders was to spread communal hatred and distrust among communities to destabilize the state of Punjab. Jimmy and Jagtar are also on the wanted list in connection to an illegal weapons case of Baghapurana registered in 2016. Ramandeep was also involved in the same case.

Last year, Harminder Singh Mintoo, the chief of Khalistan Liberation Force stormed to media limelight, when he was freed from Nabha Jail along with some of his aides and four other gangsters on 27th November 2016. Next day, Delhi Police arrested Mintoo from Nizamuddin railway station. 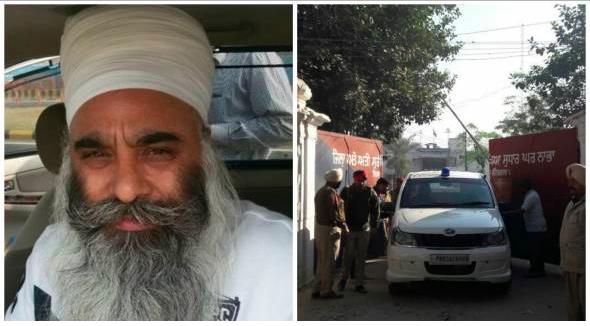 During the interrogation, Jimmy, Jagtar and Ramandeep revealed that Mintoo was involved in the Baghapurana illegal weapons case too.

In his statement, CM Amarinder said that ISI is readily involved in radicalizing the youth to carry out violent activities and there were strong indications of the active involvement of Pakistani intelligence operatives based in Pakistan as well as other countries.

This statement supports what Harminder Singh Mintoo revealed in 2014 when he was interrogated after arrest. Harminder Singh Mintoo and his operative Gurpreet Singh stated that ISI lures gullible Punjabi youths into terrorism by promising glamorous life in foreign nations like Thailand, Malaysia, etc. Mintoo himself was deported from Thailand in November 2017. Mintoo said that ISI had organized a training camp in Thailand where Ranjit Singh Neeta, the chief of Khalistan Zindabad Force played a major role.

On June 4, Punjab police’s counterintelligence unit arrested Gurdial Singh, Jagroop Singh and Satwinder Singh, key Khalistani hitmen suspected to be part of a widespread assassination plan in Punjab and Delhi. Since April 2017, 6 Khalistan terror modules have been busted and 23 Khalistani Terrorists have been arrested. Gurdial had connections with both Khalistani terrorists and International Sikh Youth Federation (ISYF). Jagroop and Satwinder were recent recruits, radicalized through extremist propaganda that has flooded social media in the past decade. This again verifies Mintoo’ss claim that ISI is luring Punjab youth into terrorism. Jagroop received four day training with explosives at ISI safe-house located in Lahore cantonment.

The Saudi Prince is Not Building a Fair and Moderate Saudi Arabia. He Is Doing the Exact Opposite

Away from Delhi media’s glare, PM Modi is playing a shrewd number game in Punjab

Power of Victim Card: Usman Khawaja ensures that Alcohol is out of Australia’s victory celebrations