There has been a brutal murder in Bengaluru. A woman was fired at by assailants as she parked her vehicle and was approaching her residence. Of the seven rounds fired, three hit the woman in her head, neck and chest, resulting in her instant death. Ordinarily, this would have been a ‘routine’ affair. After all, aren’t countless such crimes committed in the sprawling metropolis that Bengaluru has become. Only in this case, the deceased woman, Gauri Lankesh was a Journalist who had burnished her credentials as an outspoken critic of Right wing forces. Hence, even before the Police could descend on the crime scene and make a preliminary assessment of what had happened, eminent members of our intelligentsia, journalists and critics of the government announced loudly from the rooftops that here was a murder committed by Hindutva forces, who are intent on silencing any voice of dissent.

Shehla Rashid, one of those JNU commies, even announced that it was Abhinav Bharat, the organization Col. Purohit was accused to be working for before he was arrested, that had a hand in Gauri Lankesh’s brutal murder. Like frogs that emerge at the whiff of rains, politicians, liberals and various others who have made a career out of criticizing the government began gathering at the sight of what seemed like a murder that could be milked for political gains.

It is true that Gauri Lankesh was not exactly fond of the Sangh parivar.

She routinely castigated the right wing forces and was well known as an independent, fearless woman who spoke her mind on issues relating to the poor and the marginalized. It is also equally true that her anti-establishmentarian views led her to support radical leftists and even the Naxals. Gauri Lankesh was earlier the editor of Kannada weekly tabloid, Lankesh Patrike, founded by her father. Sometime in 2005, she fell out with her brother, who was the proprietor and publisher of the weekly and founded her own Gauri Lankesh Patrike. Sometime in 2008, Gauri Lankesh had aroused BJP’s ire over the content of her Patrike, leading to defamation cases which ended with Gauri’s conviction and earned her a jail sentence for 6 months in lieu of which bail was granted. The Police are believed to have obtained leads from CCTV footage Gauri’s mobile phone. Sadly, the confidence in Siddaramaiah’s police force is so low that even opposition BJP, which is alleged to have a hand in Gauri’s murder is seeking CBI’s intervention to ensure that culprits are nabbed.

It is interesting to note that professional Rudaalis (composed mostly of opposition leaders, journalists who are avowedly anti-Modi and liberals and their ilk) have laid the blame of Gauri Lankesh’s murder squarely on the Union government. It is strange how the Siddharamaiah led Congress government has been allowed to go scot free even though law and order is solely the state government’s responsibility. The timing of Gauri’s murder also raises suspicions. The murder is timed just around the time when Karnataka is scheduled to go for polls and the BJP is expected to give Siddharamaiah a run for his money. Even so, Siddharamaiah, one of the last ‘politically-capable’ Congress CMs, is leaving no stone unturned to upturn BJP’s apple cart. 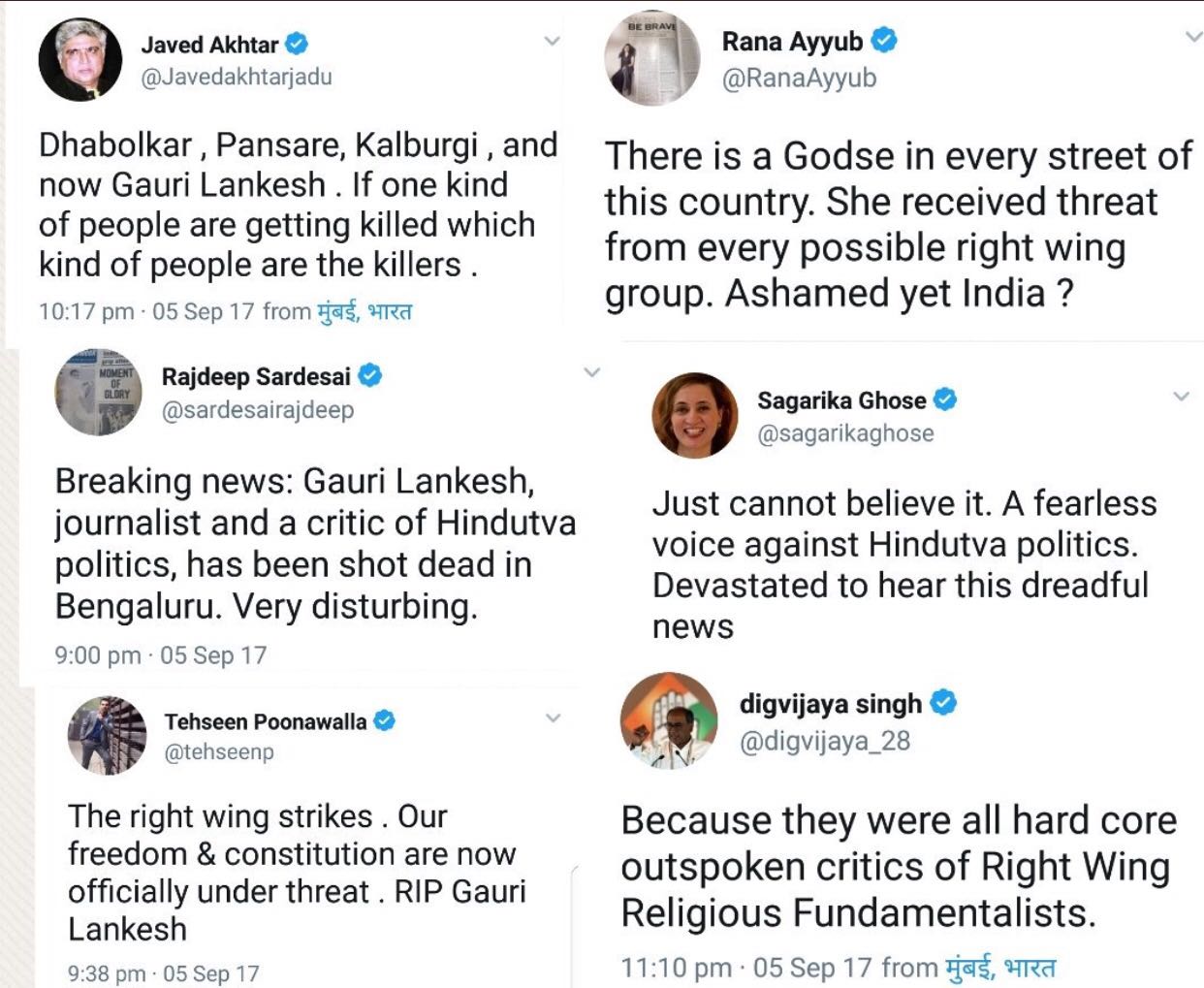 From supporting Lingayat’s demands to be recognized as a religious minority to shedding tears on Gauri’s murder, Siddharamaiah is playing all the dirty tricks to fragment opposition’s votebanks and consolidate his own. It is also worth noting that there were reports that Gauri Lankesh was investigating some corruption allegation against Karnataka government. This information, if true, adds a new angle to what is already turning out to be a complex murder case. Also, as some have already noted, Gauri Lankesh, while clearly opposed to the BJP, was so insignificant that it would make no sense to the BJP to get rid of her, unless of course they were suicidal enough to want to spoil their own chances at the hustings.

It is unquestionable that Gauri Lankesh’s murder deserves condemnation and the perpetrators of this crime should be caught and punished at the earliest. However, how is it that while Gauri Lankesh’s murder has caught the nation’s fancy, names such as Rajdeo Ranjan were never even mentioned in the national media. Rajdeo is alleged to have been bumped off by Siwan gangster Shahabuddin, who as is now evident enjoyed political patronage under the Mahagathbandhan government. Then there was the case of several journalists being murdered in Uttar Pradesh in 2015. Sadly, given that these journalists did not belong to the established left-leaning, wine-sipping, Modi-critiquing circle of journalists, their murders, however heinous, did not qualify for breast beating that accompanied dastardly murders of Kalburgi and now Gauri Lankesh. The message is clear, we will outrage for you only if you belong to our fancy, little clique.

Some twitter users have also highlighted the last tweets of Gauri Lankesh wherein she appears to highlight the need to concentrate on the biggest enemy (presumably Modi/BJP/RSS) and not fight amongst ‘ourselves’ by exposing each other, praying for ‘Peace, Comrades’. There are multiple inferences that can be drawn from these tweets. It is now left to the law enforcement agencies to get to the bottom of this hideous crime and expose the truth.

Gauri Lankesh, whether she was or wasn’t a friend of the current government, certainly deserves this much!

If you think Naming of Kids in India doesn’t have a pattern, you are horribly mistaken!