by Shefali Vaidya
in Culture
0

People of Karnataka revere him as ‘Nadedaduva Devaru; ‘Walking God’. When you see the amount of work done by this frail 108 year old Seer in the field of education and rural development, you know exactly why.

When I entered the small village a few kilometres before the town of Tumkur that houses the SiddaGanga Mutt, I saw Swamiji’s serene face smiling at me from every wall, from humble tea-shops to grocery stores. Almost every person in the village has been a student at the Mutt school at some time or the other.

‘Swamiji is a great man. He loves education’, the young man who ran his own tea stall in the village told me. ‘I am a commerce graduate from his college. We only have to pay 1000 rupees a year and everything is free, education, stay, food, everything’!

Shree Shree Shivakumara Swami heads the Sree Siddaganga Mutt located in the Tumkur district of Karnataka. He is the founder of the Sri Siddaganga Education Society, a trust that runs several educational institutions including primary schools, high schools, school for the blind, higher secondary schools, colleges of arts, science and commerce, college of pharmacy, teacher training college and engineering college. About 30000 students are enrolled in these institutions every year and enjoy quality education at very nominal fees. For his immense work in the field of education and rural development, the Modi government awarded Swamiji a Padma Bhushan in 2015. PM Narendra Modi himself visited the Mutt in 2014 to seek the blessings of the seer. 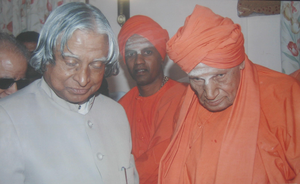 Shivakumara Swami Ji was born in 1907 in Karnataka. He is well-versed in English, Sanskrit as well as Kannada. He took Sanyas in 1930, when he was just 23 years old and joined the Viraktashram order of monks. The order believes in three forms of Dasoha (sharing or charity)—anna dasoha (food), jnana dasoha (knowledge) and vidya dasoha (education).

The residential Gurukula at the Mutt houses more than 8500 students from the age group 5 to 16 years. The children are provided with free food, education, and shelter. The Mutt also organises an annual agricultural fair to empower the farmers in the area. The Mutt runs a free canteen, where over 5000 people eat everyday! Legend has it that the sacred fire that was lit at the Mutt over a hundred years ago continues to burn bright till today and is never extinguished.

As Shivakumara Swami Ji was resting when I reached, I went to see the old temple located atop a giant granite boulder. A young boy of about 12 was chanting Mantras in chaste Sanskrit and was officiating as the priest at the SiddaGanga temple. He conducted a small prayer for me, and gave me some Kumkum as prashad. ‘The child is a student from our own Gurukula, anyone from any caste or background can learn Sanskrit and become a priest here’, said one of the Mutt officials who had accompanied me to the temple. The boy priest smiled sweetly at me.

We walked down the hill to take the Darshan of Swamiji. There was an old well-polished cot of black Mahogany wood on the verandah outside the Mutt Kitchen. A pair of wooden Khadaus (footwear) rested under the bed, and Swamiji was sitting up on the bed reading a Kannada newspaper. He was 108, and he was reading without his glasses!

’Swamiji, even today, does all his work himself. He sleeps only 3-4 hours in a day. Everyday, he leads the morning and evening prayers sung by the children of the Gurukul. Did you know he taught mathematics, Sanskrit and English at the Siddaganga institutions for 65 years? He used to teach till he was 90,’ exclaimed a man standing behind the bed.

People were streaming constantly to touch his feet, leaving small amounts of money or fruits as an offering. Swamiji murmured his blessing, but continued to read the newspaper through all this. After some time, he set the paper down and started inscribing some mantras on square pieces of copper foil.

‘What is he writing ?’ I asked one of Swamiji’s aides.

’Taitas, talismans. These are mantras he inscribes on the foil. People take these talismans for the well-being of their children’, he replied.

I moved forward and touched Swamiji’s feet. ’She is a writer from Maharashtra,’ an aide informed Swamiji. He smiled and inscribed an ‘Om’ in Kannada on a piece of paper I gave him. He gave me an apple. ’Take this’, the Swamiji said in English, as he smiled at me again. There was a lot of wisdom and compassion in his eyes. I touched his feet again and moved back to make way for the other devotees take Darshan. They were all simple people from nearby villages. I could see the rapture on their faces when they took the Darshan of their beloved Guru.

An old woman was so overwhelmed by his presence that tears were flowing down her face as she rested her wrinkled forehead on his feet! I felt my own eyes getting moist. Closing my eyes, I silently prayed for his blessings before moving away.

‘Come, see our Kitchen’, the man accompanying me said. We entered into the huge, cavernous kitchen. There were humongous vats of food. There was a Kadai as big as a small jacuzzi in which a huge quantity of Sambhar was boiling away. In other vessels as tall as grown men, rice was getting gently steam-cooked. In a giant shallow vessel millet balls were being rolled by hand. The fire was fed by wood and arecanut husks. ‘We use solar heaters to boil the water to steam cook the rice. The ragi or millet used to make the balls is grown in our own lands, so are the vegetables put in the Sambhar. Only the rice and daal we get from outside, donated by devotees,’ explained the Mutt official.

I entered the Dining hall. It is a massive building that can sit thousands of people at one time. As it was early morning, breakfast was being served to the kids from the Gurukula. Young boys clad in a white dhoti and a maroonish red uttariya smiled at me shyly. They chanted a prayer in Sanskrit before they began eating. The reverberations of so many pure, innocent voices chanting a Mantra together lulled me into a quiet trance for a few moments.

‘All these boys are from poor families mostly from Karnataka, Andhra and Tamil Nadu. Every year we get thousands of applications. We have only two criteria for selection, the child must have a willingness to learn and the financial condition of the family must be poor!’

I exited the dining hall reluctantly. Some of the kids waved to me as I left, some giggled shyly. As I walked back to the car, I glanced once again at the verandah where Shivakumara Swami Ji was sitting for Darshan. People were continuously coming to seek his blessings. Swamiji was lost in writing shlokas. Shivakumara Swami Ji – A true Karmayogi indeed.