Movie halls are overly crowded on weekends. And I being a finicky movie goer prefer the quieter theatres. However, this week there was a compelling urge to watch the recently released Airlift. One was the subject and there is no denying the main reason was Akshay Kumar. The man had always enthralled me with that perfect skin tone and those killing Indian looks. Not to forget the variety of movies he has done. His previous film BABY deserves honorable mention. 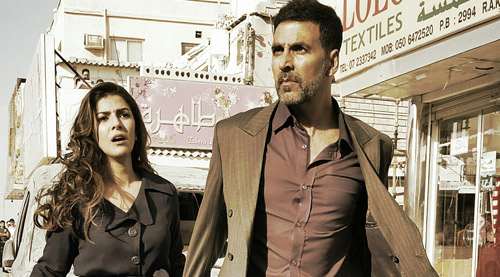 So what is special about Airlift? It is just based on a real life event. But that is what it makes it all the more difficult. When you take a real event and want to narrate your story around the same, it becomes a big challenge. Your audience already knows the story and you have to be careful with facts. And you also cannot make it a documentary or a preachy, draggy narration. And then you also have to make a commercial movie. A movie not solely for the festival circuit but also for the masses.

Among other things that the film does, it also leaves us with a lesson. That which says – you can make commercial films without heroes ripping their shirts off, without dramebaazi, no cars flying, no controversies and, of course, no arms posed like some new free hand exercise etc. And you do not need to drag a film for three hours. Airlift manages to say a story of the evacuation of close to two lakh Indians in a sweet duration of two hours.

Thanks to the age of information, we all know what happened in 1990. We also know about the humongous mission that Sunny Matthews and Vedi had taken up all those years back. Matthews’ granddaughter’s touching post on Facebook echoes the uphill task they had at hand – “The first challenge was to prepare over 100,000 travel documents. Delhi had sent two planes for evacuation. Ships began arriving a lot later. With nearly a lakh people stranded, I had to look at the alternative of bulk evacuation by road. Sunny Mathews, an extremely resourceful Indian working in Toyota, did a great job negotiating with private bus operators for evacuation via Iraq to Jordan by road. These were 2,000 km trips. Though Iraqi soldiers did not target Indians as many Iraqi officers were trained in India, it was still a dangerous journey.” But in spite of knowing all will be well, the men and women will be ‘airlifted’; and the hero will emerge as the real hero, you sit at the edge of your seats and if you are not too worried about your manicured nails, you might even start biting them. The storytelling is brave and even though it slides at a few moments, it is one of the most relevant stories of recent times. It is not 1990, but human misery still is the same. It is not Indians, but people are still carrying the burden of their refugee identities. The timelessness of the storytelling of Raja Krishna Menon and team is something to watch out for.

The young Iraqi soldiers that litter the roads with guns and merrily kill, loot and molest makes one cringe and sit up. It also makes one think what a mess they have made of their lands. And what beautiful lands. Saddam’s rise in that period forces you to think about modern day Iraq.

Prakash Belawadi had compelled us to watch him in Madras Cafe and he manages to do that again with his role of a pesky refugee who has a problem with anything and everything. His character is so real that you feel you might have met him somewhere. And Purab Kohli, the man that manages to portray an ocean of pain in a pair of eyes. And what a winner his character is. The character reminds us, tough times not only test a man/woman’s character, it also might create indefinable human bonds.

And the real high point of the narration is the reality of Akshay and Nimrat’s character. Airlift could have crossed the threshold and overdo patriotism and make it a preachy or jingoistic film. But no. It is measured and the emotional distance between the country of birth and country of residence is even accepted. Nimrat’s anger at her husband’s humanitarian act is realistic. She doesn’t go about glorifying his character. Rather as a common woman, a mother and a wife she seeks safe passage. And we do just that in reality. Not rally around strangers.

And Bollywood will continue to do this. Just when you start losing home it breaks the watertight compartments of Indie and commercial films and gives an ‘ Airlift ’. I don’t know how many crores this film will make, but this will remain close to my heart. These are the stories that need to be told. Eight packs and eight more cars can fly, but it is ‘Airlift’ that will lift Bollywood.

Feminism – An Obsolete ideology that has outlived its utility