No Result
View All Result
Newswire
Everyone in NZ will have access to vax: PM 31 mins ago
Goa: Two senior citizens found murdered in a storeroom 37 mins ago
S.Korea-US kick off joint military drills 39 mins ago
Western Digital launches line of SanDisk extreme portable SSDs 39 mins ago
Andhra police celebrate Women’s Day with plethora of events 43 mins ago
No fuel tax hike in Karnataka budget for 2021-22 48 mins ago
Next
Prev

There is a long list of wine swigging, pearl necklace wearing, and Designer Saree clad ‘Civil Society’ activists in India. The socialite-activists may be divided by their color of sarees or size of pearls in their necklaces, but their pathological hatred towards BJP and Modi unites them. Mallika Sarabhai is a coveted name in the sacred list of Socialite-Activists, the list that boasts of other elites like Teesta Setalvad, Shobha De, Arundhati Roy and Brinda Karat.

Here is a brief Introduction of Mallika Sarabhai:

Mallika Sarabhai has been active politically too. In 2009, Mallika Sarabhai contested against L K Advani. Widely believed to be propped up by the Congress, She lost her electoral deposits as Advani, the old horse of BJP kicked her into political oblivion. She dissented against then Gujarat Chief Minister and current Prime Minister Shri Narendra Modi during his Sadbhavna Mission in September 2011. She has been one of the most vocal critics of Narendra Modi. Even after all SITs awarding Modi a clean chit for the 2002 Gujarat riots, Sarabhai has been relentlessly calling Modi a murderer. She finally found the perfect match in Aam Aadmi Party which she joined in 2014.

But why are we discussing Mallika Sarabhai today?
Legendary Bharatanatyam dancer and Padma Bhushan recipient Mrinalini Sarabhai, passed away on Thursday morning at the age of 97. Mrinalini Sarabhai is widely believed as the leading light of Indian dance scene. No doubt she was a national icon.

“My dear prime minister. You hate my politics and I hate yours, that has nothing to do with what Mrinalini Sarabhai did to promote the culture of this country to the world over 60 years. She blazed a trailer for our culture in the world. That her death sees no word from you shows your mentality. However much you hate me, as our prime minister it behove you to recognise her contribution. You have not. Shame on you.”

There is no rule book that summaries the behaviour to be observed during one’s mother’s rites but all laws of sensitivity and sensibility suggest that playing politics can never be a part of it. Mallika Sarabhai has surpassed all limits of senselessness and insensitivity with her stupid little rant. She lost her mother but all she could think of was, political mileage. She never shied in making her dissent for Modi public, and now she is begging the same man to issue a word of condolence. Ideally she should have been apathetic of Modi. And how does a grief stricken daughter (which I am assuming her to be) find time to accuse people, especially those whom she hates so much and is a killer by her own admissions? Appalling to say the least. 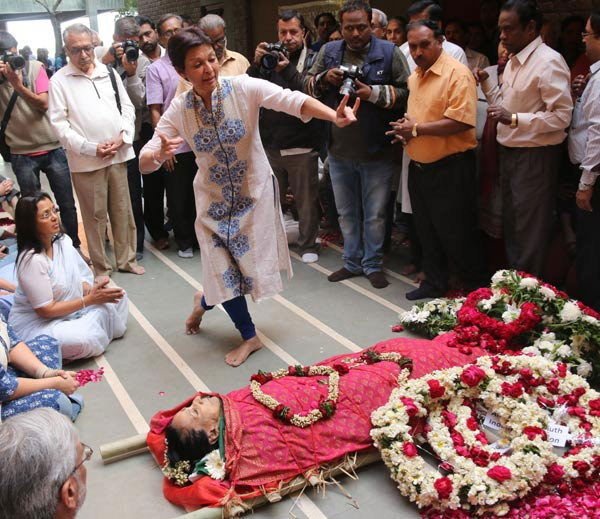 And another thing that I personally disliked. Mallika Sarabhai performed a “Krishna Nee Begane Baro”, a Carnatic composition dance in praise of Krishna for the final goodbye of her mother. It was very touching but it could have been a private affair. A Dead body, cameramen around, people watching with mouths agape as Mallika Sarabhai performed the dance didn’t look very alluring to me.

As NDTV and Times Now fight for the Number one spot, it is DD News that wins the Gold