There are more than two dozen FM radio channels in Delhi each claiming to be number one. Every channel has at least one RJ who happens to be “Dilli ka number one RJ”. The RJs impersonate voices, prank people, interview celebrities and broadcast traffic news live, on the drive. But there is one radio channel that stands apart. I am talking about 92.7 BIG FM. They do not have RJs who screech or claim to be number one. They do not have item numbers playing ceaselessly. They play soulful old melodies all day and they have created intelligent programs. “Suhana Safar with Annu Kapoor” is probably the best and the most followed Radio Show. The way Annu Kapoor narrates stories of the bygone era of Indian Cinema completely blows your mind and then they have “Yaad Shahar by Neelesh Misra” where the master storyteller Neelesh Misra celebrates life with simple stories. The stories are written by a dedicated team of writers that Neelesh Misra fondly addresses as “Apni Mandali”. The stories are generally simple, they do not have M Night Shyamalan Twists or the natural comedy of a Hrishikesh Mukherjee classic but they never fail to touch your heart. The soulful voice of Neelesh Misra and his simple stories have been my travel companions from a long time. Every time on my way to home from office, I tune into 92.7 BIG FM and enjoy the little imperfections, the sweet-sour moments, the greatness of lesser people and the simple stories of simpler people. So when Neelesh Misra announced “UP Ki Kahaniyaan with Neelesh Misra” one evening, the fan in me naturally got excited. We’ll talk about “UP Ki Kahaniyaan with Neelesh Misra” later in the article, let us first take a look at the changing trends in the advertisement industry.

Advertisements are the bread and butter of almost every industry. And for the end user Advertisements are the most frustrating experience. I mean who likes getting disturbed in the middle of an entertaining show or an engaging cinema. Advertisements even cause users to bounce. For example a user may switch channels during ad breaks and may never come back. Technically that’s the loss of a user. Hence the advertisement industry is getting sharper and smarter with each passing day. Facebook was being written off as users world over made a switch from desktop devices to handhelds but Facebook intelligently switched to native ads which showed ads as a part of a user’s feed and not as an external intruder. Native advertising is a form of “online” advertising that matches the form and function of the platform on which it appears. For example, an article written by an advertiser to promote their product, but using the same form as an article written by the editorial staff. Facebook managed to keep investors happy with this intelligent move. And this strategy was replicated by many online players successfully. But there is a major drawback of the native ads. They can only be used online. So what about the conventional mediums like the Radio or TV? That’s exactly where the two paragraphs of these articles converge into.

Like I mentioned in the first paragraph, I was very excited for “UP Ki Kahaniyaan with Neelesh Misra”. The story was shorter, simpler and the plot was quite linear but it didn’t let me down. It was a happy story and it was narrated in the spellbinding voice of Neelesh Mishra himself after all. I waited for the next story to air. Again, the story was pretty short and simple. It had a happy ending too. Every good thing has to come to an end but before that it follows a set trail. It generally begins with loss of quality. I thought Neelesh Mishra ’s show was also following the same trail. The new members of the “Mandali” weren’t half as good as the old writers. I was hating the downfall of what happens to be my favourite show on Radio. I tuned into the station the next day as well. And again the same thing happened. Simple story. Short story. Happy story. But today I could figure out a definite pattern. Every story started with a sad angle. It then moved to a progression stage where someone informed the protagonist about government schemes, provisions which could help them and then finally the advice of the “someone” worked and the family started living a happier and a respectful life all over again. 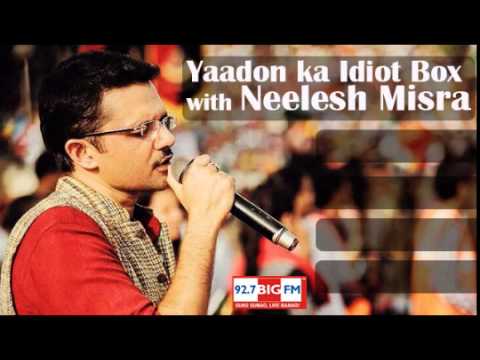 In one of the stories, a middle class couple are being harassed by the Land Mafia and the lawyer keeps delaying the dates deliberately. A friend informs the couple that UP government has requested the courts to make all the proceedings accessible to general public. Anyone can access their websites, fill in the info and access all the critical information. The couple gets to know the evil ploy of the lawyer, replaces him with an honest one, wins the case and lives a happy life then after.

In another story, a city born brat comes back to his village and looks at the dilapidated building that once used to be his Grandfather’s dairy. He recollects how his father left his village to make a name for himself and he didn’t disappoint anybody. The grandson however wished to revive the legacy of his granddad. An old villager enquires if the grandson was willing to sell the building, the grandson smiles and explains in full details about the amazing and high tech dairy schemes of UP Government using which anyone and everyone can become a dairy farmer.

In another story, a poor family destroyed by famine leaves their village and settles in the outskirts of Meerut. The poor man’s wife grows some flowers near her hut. Once as she gives flowers to a rich lady, she gets money in return. Some intelligent woman then informs her that UP government is committed to providing good returns to flower farmers. Their life takes a happy turn and they become full time flower farmers.

I am sure you can figure out a definite pattern too. The show extols the virtues of the Uttar Pradesh Government which in my opinion is not wrong. But if it indeed is a “native ad” customized into a show, there should at least be a disclaimer. I am a sucker for conspiracy theories but I am a hundred percent sure that I am not the only one who considers “UP ki Kahaniyaan with Neelesh Misra” a native ad for SP Government. There is some extremely intelligent brain in the SP Government training the subconscious of potential voters. Neelesh Misra is a trusted brand after all and anything expressed in his voice is bound to have an effect on the listener’s subconscious.

Hate Mongers of Mainstream Media- A rising threat to the idea of India.

The Indus Water Treaty: Another Nehruvian blunder that must be corrected