by Paurush Gupta
in Opinions
0

The Preamble of the Indian Constitution starts with the words ‘We the People of India’. This clearly states that the people of India are the ultimate source of power. Unfortunately, after Independence, certain elites illegally usurped the power and exercised it without any accountability. This power grab applied in every field be it academics, institutions of governance, mass communication or arts.

But with the advent of social media, people started questioning these elites and reduced their hold on power. This was catalysed after Narendra Modi took charge as the Prime Minister of India. Since then, the nervous breakdown of yester-years decision makers, power brokers and their sycophants has been visible time and again.

On the 24th of November, Richa Chadha got success in getting the much-needed two minutes of fame. The attention seeker, who is currently short on employment opportunities, shared her unsolicited opinion on the contemporary Political and Military debate around the reclamation of POK. Mocking the remarks of Lt. General Upendra Dwivedi, she remarked, ‘Galwan says hi’.

However, this is not the only incident where Richa Chadha has made snide, anti-army statements and tried to look intellectual.

1) Actress Richa Chadha in 2012: Wagah border has to be the greatest circus in the country.

This is the respect for our soldiers at wagah border?

But as they say, cheap publicity has its own side effects. Soon, netizens started lambasting Richa Chadha for her verbal diarrhea. People from all walks of life criticised the alleged actor for making disgraceful and anti-army remarks.

Till yesterday, I didn’t know who Richa Chadda was. These wannabe divas have cracked some formula for quick fame! ‘Click bait actors’ has to be a new category for Bollywood awards. Who do you think will win the contest?

Quite a stupid comment from a little known actor. I find nothing wrong with Northern Army Commander's response-a mere statement of Govt policy- to a pointed question from the media. If that upsets some people in Pakistan, so be it. https://t.co/ZEk15EqMP5

Interestingly, several actors from Bollywood condemned her disgraceful remarks as well. All these stars including the Brigadier Rudra fame KK Menon reminded the attention seeker Richa Chadha about the supreme sacrifice and the utmost pride one has and should have for the ‘Bravehearts in Uniform’ sloughing their life to safeguard even morons who speak ill about them or mock or ridicule them.

Hurts to see this. Nothing ever should make us ungrateful towards our armed forces. Woh hain toh aaj hum hain. 🙏 pic.twitter.com/inCm392hIH

Our brave men& women in uniform,put their life on the line to keep every citizen of our Nation safe &secure! Least we can do is to behold love, respect & gratitude,in our hearts, towards such valour! #JaiHind! वंदे मातरम!!🇮🇳🙏 pic.twitter.com/5mqbYfb8Ue

The Federation of Western India Cine (FWICE) Employees also condemned actor Richa Chadha for her snide commentary against the Indian Army. Reportedly, it is the oldest and largest organisation comprising 32 other organisations of the Cine workers, technicians and artists working in the Film Industry.

Hurt by the deranging statements against the Indian army, Filmmaker Ashoke Pandit filed a Police complaint against Richa Chadha.

I filed a police complaint against actress #RichaChadha at #JuhuPolicestation (Mumbai ) .
Nobody has a right to mock our soldiers .
I hope @MumbaiPolice will act against her as per the law of the land . @mieknathshinde @Dev_Fadnavis pic.twitter.com/In0HD9LuJa

Silence of Majority is always exploited by the vocal fringe

Let me tell you categorically, don’t be in a fool’s paradise and think that Bollywood has changed its old ways of functioning by these tweets of some Bollywood actors.

Evidently, the majority of the Bollywood actors, directors and producers still chose the path of ‘conspiracy of silence’. They preferred not to sour ties with the Islamo-leftist cabal in Bollywood that still commands some power and may hit their business adversely.

However, the usual suspects came in her support and gave their own spin to justify the alleged actor’s retracted words. In an insane hatred for PM Modi, these usual politically dimwitted and fame crazy individuals have been regularly making shameful and abhorrent running commentary to demean every institution of National Importance, either in ignorance or for some cheap bucks and publicity.

. @RichaChadha strength and love to you! 💙

Didn’t expect this from you @akshaykumar ..having said that @RichaChadha is more relevant to our country than you sir. #justasking https://t.co/jAo5Sg6rQF

Apart from the Islamo-leftist cabal, the alleged actor Richa Chadha got support from Pakistan as well. 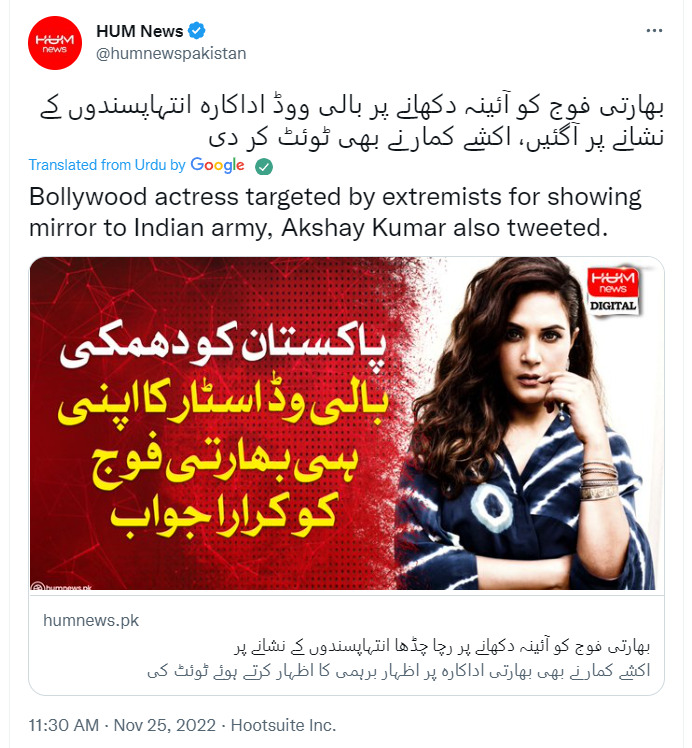 The Richa Chadha fiasco is the glaring example of how perturbed Islamo-left leaning cabal in Bollywood is. The split opinion of Bollywood celebrities also highlights that the power centres and institutions of FATWA in Bollywood have gone for a toss. The industry is breaking the shackles of those autocratic times and is moving on the path of democratisation in which more and more people will start speaking up against anything and everything that is anti-India and anti-army.

Furthermore, the so-called actors like Richa Chadhas and Swara Bhaskars should shun their urge of verbal diarrhea and should enroll in National School of Drama and find some acting work as Fukrey 3 is a gone case thanks to her needlessly making anti-army statements.

Gautam Adani’s big statement about the future of NDTV