Gautam Adani, the richest man in Asia, has bought (indirectly) a 29% stake in NDTV, the media venture of Prannoy Roy and Radhika Roy. The Adani group has floated an open offer for another 26% share, which is currently owned by various retail and institutional investors. If Adani group is able to get another 26% through an open offer, it will become the majority stakeholder in the NDTV. 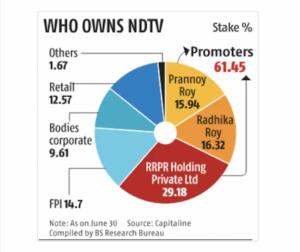 Adani group acquired a 29% stake of NDTV through a third party, to which Roys had sold the stake in 2009. The Roys continue to hold 32.26 per cent in NDTV, and as of now are the controllers of the firm as largest shareholders.

NDTV’s current management is, obviously, not very happy with bid of Adani to takeover the NDTV, that too without informing them. NDTV in its statement stated “The NDTV founders and the company would like to make it clear that this exercise of rights by VCPL was executed without any input from, conversation with, or consent of the NDTV founders, who, like NDTV, have been made aware of this exercise of rights only today. As recently as yesterday, NDTV had info­rmed the exchanges that there was no change in the shareholding of its founders,…” (sic)

SEBI’s action on Prannoy and Radhika

“However, contrary to the same, in the present case, the Noticees i.e. the promoters and directors of NDTV have been found to have indulged in fraudulent acts wherein they have bartered away the interests of NDTV…,” it added. (sic)

The SEBI order was based on a complaint filed by Sanjay Dutt who is a minority shareholder in Roy’s firm through Quantum Securities. As per the SEBI order, RRPR Holdings, Prannoy, and Radhika Roy, the majority shareholders of NDTV violated the regulatory orders by not disclosing the loan agreement with Vishvapradhan Commercial (VCPL), a company previously owned by Mukesh Ambani but now in hands of Nahata Group.

VCPL gave a loan of 350 crore rupees to NDTV in 2009 which the company used to repay the 375 crore rupees the media company had taken from ICICI Bank in 2008. The loan agreement gave VCPL an effective control of 52 percent shares of NDTV through various clauses. Under the agreement, Roy’s gave 99.99 percent shares of RRPR to VCPL, which the company could claim at any time between 10 year loan period or after that. This gave VCPL claim at 26 percent NDTV shares and call option for another 26 percent share gave VCPL 52 percent effective control.

In 2017, CBI raided the houses of Prannoy and Radhika Roy and at that time the Roys made a foul cry of attack on media freedom. The order by SEBI will strengthen the case of CBI and Enforcement Directorate (ED). CBI has already filed an FIR which alleged that the Roys bought a house in South Africa by the diversion of 45 crore rupees from the ICICI loan. The investigation authority is yet to file a charge sheet in the case, the SEBI findings will enable ED to attach properties of the Roys under the Prevention of Money Laundering Act and could lead them to jail for a seven-year term.

The fact that NDTV is in deep trouble is not hidden from anyone, its problems are getting worse with each passing day and its political patron is also not in power to help it out. It is in a sad state today because of its agenda-driven journalism, prioritizing agenda over truth, and vicious hatred for one particular party. Because of all these biases, its viewership has drastically decreased but still, they didn’t learn their lesson and carried on with their anti-India and anti-Hindu propaganda. The alienation of viewers is clearly visible in their TRP rating which is in the last spot. If NDTV does not get its house in order, financially as well as qualitatively, the end might not be very far.