Startups are changing the landscape of employment generation in India

by Tejasvi Malhotra
in Trending
0

India is among the economies that carry the responsibility of employment generation to maintain its real GDP of $2.66 trillion. With this figure, it can be evident that India will no longer succumb to the dominance of western powers.

To carry on this phenomenon and present India as the next superpower, the once called “sone ki chidiya” is working relentlessly in accomplishing it. Various governmental schemes like Aatmanirbhar Bharat, Make In India, Startup India and many more are acting as the main pillars to boost the Indian economy with startups. With the help of these schemes, today, India holds the position of the third-largest startup ecosystem in the world.

Under the guidance of Prime Minister Narendra Modi, the unicorn wave in India has hit the country so hard, that in little to no time, India has become a hub for foreign investors to pour in their money for better profits. Data shows that India’s unicorns are expanding their roots rapidly. As per the Economic Times, till just 31 March 2022, the aggregate valuation of Indian unicorns surged to $535 billion. To sum it up, India is rowing a boat of startups with an extra output of generating employment in the country. 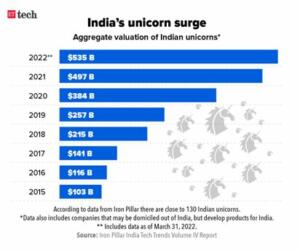 As per the above chart, it is evident that startups are on a continuous rise in India. Especially after 2014, the global picturisation of India changed dramatically, from an underdeveloped to a developing economy.

Unemployment is a big problem in India

Every coin has two sides to it, just like every developing economy has positive and negative growth metrics. There are hundreds and thousands of people in almost every economy who struggle with unemployment. However, the Indian government is curbing the menace that is hampering the smooth maintenance of a developing economy.

Data shows that with the implementation of government policies, India is gradually eliminating its past problem of unemployment. The current Indian government is of a perception to modernise India with its modernised policies. And this can be clearly reflected in the recorded data.

As per Trading Economics, India is slowly moving towards better and reduced numbers of unemployment. In July 2021, the unemployment rate was recorded at around 8.3 per cent. While in October 2021, the number was 7.7. On the other hand, in January 2022, it was at approximately 8.1 per cent. However, in April 2022, the number was trenched to 7.8 per cent.

India has an enormous population, which resulted in the need to create more job opportunities in order to save people from dying of hunger. As per a report by the International Labour Organisation, the number of job-seeking Indians was projected around 17.6 per cent in the year 2017. Nevertheless, the figures are improving with the emerging unicorns in India, which are helping the economy in uplifting itself.

Read more: It’s not what it looks like – There’s a lot more behind the glitz and glamour of the startups

Startups are curbing the problem of unemployment

Startups have emerged as the growth engine of the world’s sixth-largest economy. The young minds of India are capable enough of creating a surge in the unicorn industry. Business owners and founders are hiring the talented Indian population in hordes that are capable to outperform themselves in almost every sector. This can be witnessed with the Silicon Valley, jam-packed with Indian minds and efforts. Apparently, the world knows the fact that Indians are the most creative people they have ever seen.

With India being one of the largest hubs for startups in the world, it has been revealed that 77 per cent of respondents believe that budding firms have a positive role in boosting the employment scenario in the country. It was also revealed that more than six lakh jobs have been created in India in 2022, till now.

In January 2022, even President Ramnath Kovind, during a joint session of Parliament revealed that since 2016, India has seen 60,000 startups in 56 different sectors. He also emphasized that in 2021, during the pandemic, more than 40 unicorn startups emerged in India, each with a minimum market value of Rs 7,400 crore.

According to the Economic Survey 2021-22, India has over 61,400 startups recognized by the Department for Promotion of Industry and Internal Trade (DPIIT), with at least 14,000 recognized during fiscal 2022 alone.

The emerging unicorns in India are aiding the third-largest ecosystem of the world through their continuously expanding roots. The fact that India is now standing only behind the US and China in terms of the number of Unicorns, is an effort of PM Modi in making people job providers rather than job seekers. Over the last 8 years, the business environment in India has improved drastically.

Businesses all around the world are looking for a reliable country to increase their profits and popularity worldwide. India is taking up the vacated space at a rapid pace and the acceleration in Unicorns registration is evidence of that.