A few decades down the line when (and if) India becomes the largest economy in the world and a prosperous high-income country, the decade of the 2020s will be remembered for democratizing corporate India. For the starting four decades since independence, India was a crony socialist economy with only a few politically connected business houses being allowed to manufacture goods and sell them.

In 1991, the country started reforming the political economy but instead of establishing a proper capitalistic framework, it went for crony capitalism. The excesses of crony capitalism led to the Modi government coming to power in 2014, and it took more than one term to establish a proper framework for a rule-based capitalist economy.

In the six to seven years of the Modi government, the Indian startup ecosystem started maturing and with a conducive environment for new businesses, 2021 became the year when the true prowess of India’s entrepreneurship became visible to the world. 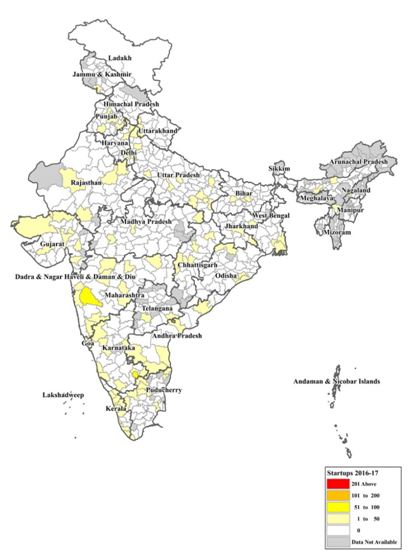 As the Economic Survey showed, startups are emerging from every part of the country, and today almost every district has a few startups. As evident in the comparison between these two maps, the density of the startups has gone up exponentially across the length and breadth of the country. 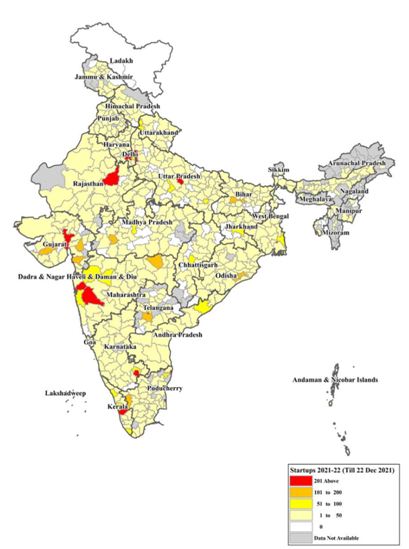 India has emerged as the third-largest startup ecosystem in the world after the United States and China. With 43 Unicorns (companies valued over 1 billion dollars) in 2021, the Indian startup ecosystem that was in making for almost a decade started maturing. Moreover, showing another very resilient sign of maturity, around 8 startups filed for IPOs in 2021, and many more are lined up for 2022.

The fintech sector, which is riding high on the IndiaStack platform (Aadhar, e-KYC, Digilocker, UPI), showed signs of maturity with the largest IPO in the country- Paytm. Similarly, SaaS, which is also an almost decade-old sector, showed signs of maturity with the IPO of Freshworks and exponential rise in sales and profits of other companies like Zoho, Zerodha. These two sectors (fintech and SaaS) are a decade old and are slowly maturing.

The newly minted sectors like Healthtech, EdTech, which got a big boom due to the pandemic, are yet in the early stage and expected to take at least four to five years to reach maturity. E-commerce is going through churn as traditional e-commerce is now dominated by Amazon and Flipkart, but many new players are emerging which are reimaging the whole business model of the sector.

In 2021, India produced around one unicorn every week and in the coming years, the number is expected to move northwards. With the government focusing on deep-tech technologies like semiconductors and telecom products, a new wave of startups is expected to emerge in the next few years with government support and infrastructure.

The next venue for startups to emerge is drones (the new drones’ policy has been much appreciated), defence tech (Defense ministry in encouraging defence startups), Healthtech (National Digital Health Mission), and deep-tech sectors like telecom and electronics. The startup ecosystem that started to emerge in the early 2010s has started maturing in the early 2020s and by the 2030s, these companies are expected to push the old leaders to the edge and emerge as the face of Indian industry.