HOME » Politics » Trending » Who are Goldy Brar and Lawrence Bishnoi, who claimed the responsibility for Sidhu Moose Wala’s killing?

Who are Goldy Brar and Lawrence Bishnoi, who claimed the responsibility for Sidhu Moose Wala’s killing?

Punjabi singer Sidhu Moose Wala was shot dead by unidentified assailants in Jawaharke village of Mansa district on Sunday, May 29. It is pertinent to note that the reports of his unfortunate death came a day after the Punjab Police withdrew the security of 424 people, including Sidhu Moose Wala.

The killing of such a prominent singer has raised many eyebrows. While many are criticising the government for removing his security detail despite the threat to his life, others are blaming the gun culture and drug culture prevalent in the state.

A group has taken the responsibility for the killing of the renowned Punjabi singer. But who they are? Let’s dive in to know more.

Hours after Sidhu Moose Wala passed away, Canada-based gangster Goldy Brar took the responsibility for the attack. Goldy Brar is believed to be the close aide of the Lawrence Bishnoi gang. He alleged that he along with jailed gangster Lawrence Bishnoi had planned this assassination as the singer was involved in the killing of Akali leader Vicky Middukhera and his cousin Gurlal Brar. Notably, Middukhera was shot dead in Mohali while Brar was gunned down in Chandigarh.

In a social media post, Goldy Brar wrote, “Today, Moosewala was killed in Punjab, I, Sachin Bishnoi, Lawrence Bishnoi take the responsibility. It’s our work. Moose Wala’s name surfaced in our brother Vikramjit Singh Middukhera and Gurlal Brar’s murder, but the Punjab Police did not take any action against him. We also came to know that Moose Wala was also involved in the encounter of our associate Ankit Bhadu. Moose Wala was working against us. Delhi Police had taken his name but Moose Wala used his political power and saved his skin each time.” 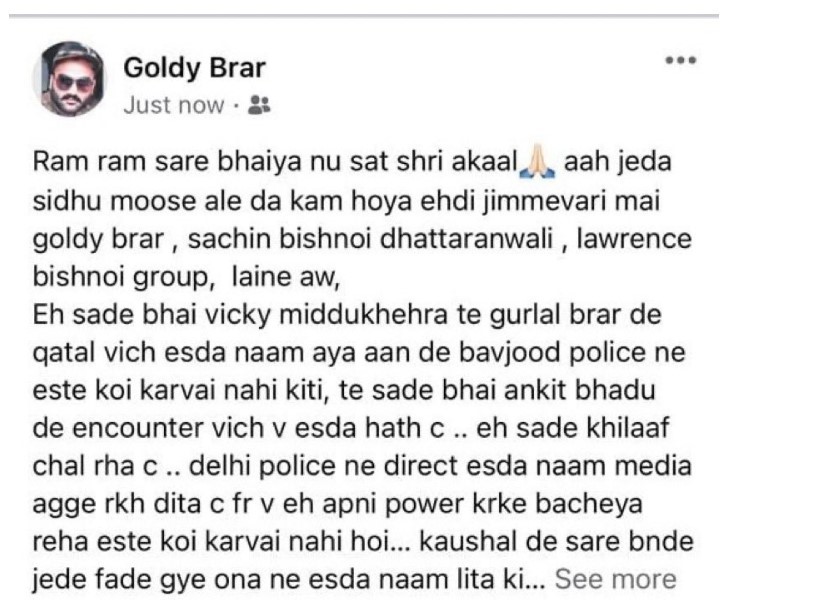 Who is Goldy Brar?

Satinder Singh, alias Goldy Brar, was involved in an extortion racket being run in the state. It is alleged that he was also involved in the murder of a Youth Congress leader Gurlal Pehlwan. In connection with Pehlwan’s murder, Delhi Police has detained a relative of Brar.

What happened was Goldy Brar’s cousin Gurlal Brar was murdered outside a disc in Chandigarh’s Industrial area in July last year. Gurlal was a close aide of Bishnoi. Thus, Bishnoi’s gang allegedly murdered Pehlwan in Faridkot to avenge his death.

He was also one of the accused in a double murder case in Gurugram. Given his involvement in multiple crimes of murder and extortion, police were behind him and thus, he fled to Canada in 2021. Now, he is operating through a module in Punjab. Brar is a native of the Faridkot district in the state.

On May 1, the Anti Gangster Task Force (AGTF) arrested three aides of Goldy Brar from Bathinda who wanted to target a businessman in the region.

Who is Lawrence Bishnoi?

Lawrence Bishnoi, 31, is a “gangster,” who is from the Bishnoi tribe. Lawrence was born in Dhattaranwali, Punjab’s Ferozpur district (now Fazilka district), and was a student of DAV College in Chandigarh. He was also the president of the Student Organization of Panjab University (SOPU).

He is accused of committing multiple crimes including attempted murder, trespassing, robbery, and assault, among others. He has been imprisoned in Rajasthan’s Bharatpur jail since 2017. One of his aids who was caught in 2018 shockingly revealed plans to assassinate Bollywood superstar Salman Khan as Lawrence had urged them to do so.

Lawrence’s aides informed that Lawrence wanted to “avenge the death of blackbucks by Khan,” according to The Indian Express in 2020. Lawrence’s close associates include Sampat Nehra, Kala Jathedi, and Goldy Brar, who allegedly confessed to the killing of Sidhu Moose Wala on Facebook.

Currently lodged in Delhi’s high-security Tihar jail, Bishnoi has shattered the peace in the states of Delhi-NCR, Rajasthan, Punjab, Haryana and Himachal Pradesh. He allegedly carries out his illegal activities through a mobile phone from the prison.

“He has a legion of loyal supporters and sharpshooters, which remains a threat for all of us,” said an official of Rajasthan Police.

Rivalry in the gangs

Punjab as well as the neighbouring state of Haryana and the national capital of Delhi are witnessing a war between the Lawrence Bishnoi gang and Davinder Bambiha. While Goldy Brar was running an extortion racket under the command of Bishnoi, another gang named Bambiha gang is being run by Lucky Patial who is lodged in a jail in Armenia.

Read more: 5 controversies of Moose Wala: Death doesn’t absolve anyone of their sins

Both the gangs have turned the state of Punjab into a battleground and often target each other’s men. As alleged by Goldy Brar (the assumed mastermind behind the murder of the singer), Sidhu Moose Wala was a close Associate of Lucky Patial, and the singer allegedly gave crucial info about Vicky Middukhera who was later killed by Kaushal Gang Members (Lucky Patial Gang). Middukhera, further, was a close associate of Lawrence Bishnoi (Goldy Brar Gang).

Punjab is witnessing chaos and anarchy and these gangsters and their rivalry are to be blamed.