Ever since the beginning of the Ukraine-Russia conflict, the dynamics between various countries have changed dramatically. With a motive to damage the Russian economy, the US, the UK and the EU sanctioned Russia left, right and centre. However, India emerged as the saviour and began importing oil from Russia. This has left the Arab world fuming.

Meanwhile, India also decided to impose a surprise ban on the exports of wheat. Mind you, in the wake of Ukraine-Russia crisis, India was seen as the food basket of the world.

However, liberals are not really happy with the increasing dominance of India around the world. India keeps disappointing liberals as it is not unstoppable when it comes to leading the path of geopolitics.

After getting the taste of their own medicine, the Gulf nations seem to have realised the importance of Indian wheat. Since India has stopped exporting wheat temporarily with some exceptions, the UAE wants to keep the wheat it imports for domestic use and not re-export it to a third country for which it was not meant to be. For curbing this, UAE has suspended the export and re-export of wheat and wheat flour originating from India for four months.

Reportedly, the UAE government has called for a suspension of exports and re-exports and mind you, the step has been taken to stop Indian wheat from being re-sold as this wheat is meant only to ensure UAE’s food security.

Read more: The West that starved India of food, medicines and essential supplies is now crying about wheat

For those unversed, on May 14, India had banned wheat exports except for those backed by already issued letters of credit (LCs) and to countries seeking to ensure food security.

NDTV does it again

NDTV being NDTV, peddled its agenda again and reported that UAE has banned import of Indian wheat. NDTV India, in a tweet, said “Bharat se Ghenhu nehi mangayega UAE”, which means ‘UAE will not import wheat from India’.

NDTV’s blatant lie led many people to believe that UAE has taken action against India. What happened next was expected as liberals have always been against the nation’s interest and thus, celebrate anything against India.

Assuming that the has UAE banned the export of wheat to India, or it has stopped buying wheat from India, the second-largest producer of wheat in the world, liberals came out celebrating the ban.

In a now-deleted tweet, actress Richa Chadha also tried to take a jibe at the government and wrote, “Welcome to the international economic impact of hate.” However, after receiving backlash from the netizens, she deleted the tweet.

Just like any other liberal, she must have assumed that Gulf nations harmed India’s economic interests, which the likes of her keep dreaming of. 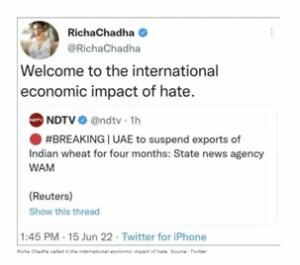 A self-proclaimed writer Harneet Singh made a stupid attempt to sarcastically target the BJP and CM Yogi Adityanath. She tweeted, “When are we sending Bulldozers there?” She also realised that there’s no need for any celebration as she deleted her tweet later. 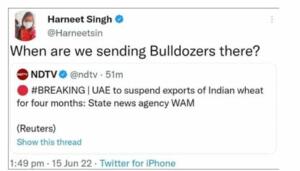 Another Twitter user Sheikh Zafar said, “Effect of Fringe element,” without having any idea what the report was exactly about.

Another Twitter user attempted to take a sarcastic jibe at PM Modi and EAM S Jaishankar and tweeted, “Thank you Modi Ji and Dr Jaishankar for their brilliant foreign policy and diplomacy. ”This statistically challenged liberals was also unaware of the fact and assumed that India doesn’t have any involvement in the export policies of the UAE.

India has become food basket of the world

India’s grain basket was overburdened with responsibilities. Wheat is the staple diet of Indian middle class and that is why it became one of the few elements of the type of grains being transported to Indian homes during Covid.

Since Russia and Ukraine are also one of the biggest producers of wheat, the world was slated for a wheat shortage. In the wake of the supply chain getting distorted due to the crisis, the onus was now on India. This led to an increase in the price of wheat, both inside as well as outside the country because of the hoarding of Indian wheat by China.

India, thus, was forced to take the step to ban the export of wheat. But liberals, instead of being proud for a nation that has helped many countries, are coming to bite their nation only.

The whole world is witnessing an economic slowdown, but not India – A data driven analysis