Modi@8: The achievements of the Ministry of Commerce and industry under PM Modi

In the modern democratic form of government, money is the ultimate resource. Governments have to somehow secure its flow in the economy. It sets up different institutions and even the Ministry (Finance) to ensure that. But, what if that money becomes surplus? Then, the only option is to engage in trade. Maybe this is the reason PM Modi chose the best of the lot to head the Ministry of Commerce and Industry (MCI). Let’s have a look at its achievements in the last 8 years.

Rules change led to a bumper inflow of FDI

Up until 1991, Indian markets were closed for foreign investment. Even when it was forced to open, usual sceptics dominated the foreign investments debate. But, in the 21st century, the advent of the Internet changed our needs as well. In a globalised world order, it is next to impossible for a developing country to change its status without involving foreign players. FDIs not only bring financial resources, but they also chip in with technology, skills and knowledge among others.

Under PM Modi, the MCI liberalised the FDI route. In sectors such as Medical devices, Thermal power, Food Products Retail Trading, Core Investment Company, Print Media (only dealing with technical subjects), Satellite, Mines and Minerals, and Coal Mining, 100 per cent FDI is permitted. Most of the sectors are only open for 49 per cent FDI. These include power exchange, pension, and insurance among others. Depending on their strategic importance, their investments are either directly accepted or are subject to approval by MCI which ropes in other ministries as well. MCI has also set up Foreign Investment Facilitation Portal (FIFP) to interact with prospective investors.

These policies turned out to be game-changers in the post as well as pre-Covid world order. When Nirmala Sitharaman became the first Minister of Commerce in PM Modi’s cabinet, India only received around $42 billion in FDI. The number almost doubled in 8 years and in the 2020-21 financial year, India received its highest ever FDI. Though capital formation is down due to covid-19, it is expected to shoot up in the near future. 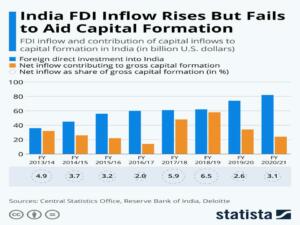 As soon as PM Modi took charge, efforts to increase domestic economic productivity kicked in. Slowly but steadily it increased. But, exporting it to other countries is equally important. India anyway produced enough to cater to its needs. All it required was a proper redistribution strategy. So, the MCI brought in some big reforms to turn the sentiments around exports.

Under the Foreign Trade Policy 2015-20, Nirmala Sitharaman led MCI liberalised norms for export. MCI introduced two new schemes namely ‘Merchandise Exports from India Scheme (MEIS)’ for the export of specified goods to specified markets and ‘Services Exports from India Scheme (SEIS)’ for increasing exports of notified services. The Export Promotion Capital Goods (EPCG) scheme under the FTP focussed on phasing out import requirements for capital goods. Specific MSME clusters were identified for increasing exports, simultaneously catalysing employment generation and increasing value addition. Efforts were also put in to diversify the composition of India’s export baskets. However, that took some time to materialise and big changes were noticed only after PLI was introduced.

The results were satisfactory, to say the least. India’s share as a percentage of total global exports only witnessed an increase since then. In the financial year 2021-22, India registered its highest export in value terms. The statistics have been crystal clear about India’s burgeoning exports as double-digit growth is being recorded in value terms of year on year exports. Other than initiatives to boost export, a part of the credit also goes to MCI not favouring trade deals like RCEP.

India has always found it difficult to formulate an effective policy channelising human resources. Either it gave too much leeway to industry bodies, or it ended up cornering them. Initially, the Modi government also faced problems in finding out the fine balancing line. But, in 2020, policies finally got an official overhaul from MCI.

Piyush Goyal led ministry launched the Production Linked Incentive (PLI) scheme in 2020. As the name suggests, Industries would be provided incentives in a phased manner and according to their performance. The scheme focuses on creating job-intensive production facilities in various segments including solar, automobile, electronics, and drones among others. Later, the government increased its efficiency by identifying key bottlenecks in its implementation. Top-level think tanks including NITI Aayog were roped in for a strictly data-driven approach. The 1.97 lakh crore incentive was predicted to bring in a rush of big-ticket investments among others. We at TFI had done extensive reports about its effect in the long run. 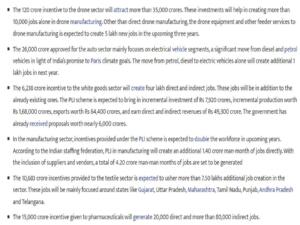 Read more: How many Jobs has the PLI scheme generated, and how many will it generate in the future

The scheme has turned out to be a game-changer for India in the post-Covid world order. India is emerging as the manufacturing hub of the world. Many companies including HP and Taiwan’s Wistron among others are setting their base in India. The competition is so tough that even Elon Musk is sitting on the periphery waiting for his turn to get fully involved in India’s growth story.

Read more: The fight over EV batteries has directly pitted Ambani against Musk and Musk cannot win this


When the Modi cabinet took oath, India was one of the worst countries in the world for doing business. The Ministry of Commerce took proactive initiatives in changing the discourse around it. It sent a slew of dossiers and coordinated with respective ministries including the Ministry of Finance, and Corporate Affairs among others to turn things around.

Ministry of Commerce liberalised the investment prospects of SEZs. Now, even trusts can set up their economic units in the zone. MCI involved state machinery in SEZs which led to an increase in FDI and hence an increase in production in SEZs. SEZs are quickly emerging as a strong backend of India’s exports. The Ministry of Commerce is currently working on more changes in the regulatory mechanism of SEZs.

Ministry of Commerce has put similar efforts into Atma Nirbhar Bharat through Make in India and Startup India. It has coordinated with ministries to launch various schemes to enable Make in India. Big industrial corridors are being established to aim only at manufacturing. To attract investment in these corridors, youth are being promoted for finding new and innovative startups.

The outcome has been outstanding, to say the least. India is quickly emerging as the manufacturing hub of the world. These developments were initially led by foreign investments, but now they are getting replaced by Desi startups. India already has amassed more than 100 unicorns and numbers are increasing in exponential terms.


When India decimated SAARC for all intents and purposes, India had to look for alternate forums. ASEAN and BIMSTEC emerged as viable alternatives. Now, only diplomacy cannot strengthen strategic interest as trade is an essential feature of a strengthened bond between two countries. Ministry of Commerce pitched in with a special emphasis on India’s trade relations with South Asian countries.

Currently, India is the biggest trading partner of Nepal. Similarly, India’s trade with Bangladesh has risen over the years. Through proactive initiatives of MCI, India is proceeding towards eliminating Chinese influence in Sri Lanka. Through enhanced trade with Myanmar, and Bhutan among others, MCI also emerged as a key catalyst of India’s ACT EAST POLICY. Under PM Modi, Ministry of Commerce was so focussed on increasing bilateral bonds (especially with neighbours), that it went on eliminating any chances of India joining any regional forum (like RCEP) which won’t cater to its interests.

Read more: Dumping RCEP is turning out to be a boon. India is slowly bridging trade deficit with China and Southeast Asia

Other than the aforementioned achievements, Ministry of Commerce has also brought various positive changes including diversifying our basket enough that the textile sector started to dominate headlines. There are more achievements of MCI than this space can count.