With gasification of coal, India takes a step ahead towards clean energy 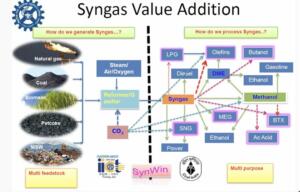 In the last few years, India has made massive strides towards clean energy and green energy. The country surpassed its renewable energy targets and set newer and more ambitious ones, becoming the only nation to deliver on Paris Climate Accords. Now in order to make its energy consumption cleaner with the gasification of the large qualities of coal burned in the country.

The Ministry of Coal has allowed concession of 50 per cent in revenue share for coal gasification (Gasification is to convert any carbon-containing material such as coal into Synthesis gas (Syngas) by reacting them with air/oxygen and steam at elevated temperatures).

Coal Gasification Projects have been planned for Syn Gas production to be used further either for production of Methanol/Ethanol, Urea or Petrochemicals. One such CIL JV project of 2.5 MTPA capacity is already in operation in Talcher Coalfield in Odisha. Other five projects with an investment of about Rs.30,000 Cr is under formulation by different Subsidiaries of Coal India Limited.

India has the world’s fifth-largest coal reserves and is the world’s second-largest coal consumer. Imports have been rising for the past two decades to meet rising coal demand amid supply limitations. To reduce imports, it is necessary to choose coal technologies that are suitable for Indian coal.

“Coal beneficiation can be accomplished through coal gasification, in which syngas produced from coal is used as both a feedstock and a fuel. Through catalytic procedures, this syngas can be used to produce fertilisers and petrochemicals,” said V K Saraswat, a member of NITI Aayog.

Apart from Coal Gasification, India is taking multiple steps in order to attain energy security and energy AtmaNirbharta before 2047, when it completes 100 years of independence.

A few months ago, the Cabinet Committee on Economic Affairs (CCEA), chaired by Prime Minister Narendra Modi gave a nod to one of the biggest Green Energy projects in India. The project entails total spending of ₹ 12,000 crores by the Union government and other concerned parties.

The amount will be utilised for finalising construction works related to the second phase of the Green Energy Corridor. Circuit transmission lines of approximately 10,750 km in length will be constructed across the country. Additionally, around 27,500 megavolt amperes transformation capacity of the substation will be added.

After the completion, the project will help in the evacuation of 20 Gigawatts of power across the country. Power evacuation facility means a facility that allows generated power to be immediately transmitted from a generating plant to the grid for further transmission/ distribution to load centres.

The second phase of the Green energy corridor will mainly benefit seven states. These are- Gujarat, Rajasthan, Kerala, Tamil Nadu, Karnataka, Uttar Pradesh, and Himachal Pradesh. When connected with a straight line on Indian maps, these states take a rough shape of a quadrilateral.

While all other nations are finding it hard to convince their population about the importance of greenery, India is quite ahead when it comes to fulfilling its commitments towards nature. In 2015, India had promised to produce 175 GW of renewables by 2022. We are just 34 GW away from fulfilling this goal.

Currently, we have 41.09 GW of solar energy, 39.44 GW of wind power, 10.34 GW of BioPower and 4.8 GW of small hydro plants. The rate of growth in renewables is far more than the rate of growth in coal-based energies. This needs to continue in order to fulfil India’s goal of producing zero carbon dioxide by 2070.

Gautam Adani comes across as a compulsive, obsessive shopaholic

It’s Fadnavis all the way