By witnessing the propaganda peddled by the left cabal, one can realise that hate could emanate from all sections of society. Despite this, in India, secularism is considered the sole responsibility of Hindus.Bollywood actress Sara Ali Khan has been hounded and threatened by Islamists time and again. That too, for all the wrong reasons. The actress is being criticized by Muslims for her religious beliefs.

Sara, recently, visited MahakaleshwarJyotirlinga in Ujjain in Madhya Pradesh. It was a day before the release of her much-anticipated film ‘Atrangi Re’ when she visited the temple. She shared a picture on Instagram with the caption ‘Jai Mahakal’ in which she can be seen standing in the temple complex with her head wrapped with a scarf (as per the Hindu traditions).

The picture had no issues. However, it did not go well with the Islamoleftists. Soon after sharing the picture, the actress began receiving flak from people of her co-religion. Radical Islamists abused her on Instagram and ironically, the attack comes under freedom of speech & expression for left-liberals.

An Islamist asked Sara, “Why do you do this. You are a Muslim? Why are you going to the temples?” while another remarked, “Muslim hokar shirk karrahi (Despite being Muslim, you are committing idolatry).”

One more netizen jumped in to spread his hatred. He wrote, “Don’t you feel ashamed? You are a blot in the name of Muslims.” wrote another.

Well, it did not stop here. The Islamists stoop to the lowest when they abused Hindu Gods and advised Sara to drink ‘Gaumutra’.

An Instagram user named (@iamziyansidd) abused, “Mahakalke Ga*d mein ghus jai (Get into the a** of your Lord)” 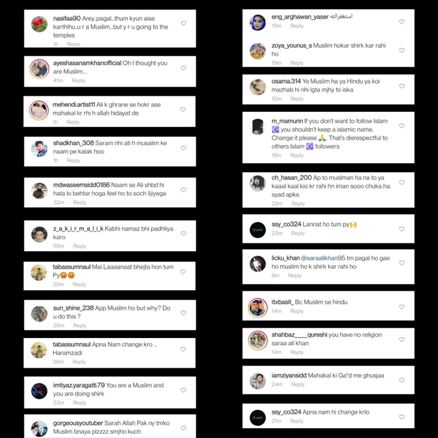 However, Right Wing activists and a few journalists defended the actress.

Anshul Saxena, a news analyst, tweeted, “Now, radical Islamists are abusing actress Sara Ali Khan on Instagram because she visited Mahakal Temple in Ujjain & posted photos of it. This doesn’t come under the category of hate speech, it is freedom of speech & expression for left-liberals & radicals.”

Now, radical Islamists are abusing actress Sara Ali Khan on Instagram because she visited Mahakal Temple in Ujjain & posted photos of it.

This doesn't come under the category of hate speech, it is freedom of speech & expression for left liberals & radicals.

Monica, a former journalist, also tweeted, “Sara Ali Khan is being attacked for visiting Mahakal Temple. No one will stand for her Freedom of Religion?

Sara Ali Khan is being attacked for visiting Mahakal Temple. No one will stand for her Freedom of Religion? pic.twitter.com/zlKmjZLyd3

Sara attacked for her ideological beliefs

The liberals become intolerant when someone wishes well for their ideological enemy. As she wished 57th birthday to the home minister, the intolerance lobby left no stone unturned in hurling their angst-led troll army on Sara.

This is not the first time Sara Ali Khan has been subjected to dirty trolling by left liberals and Islamists. In 2018, she was subject to excessively hateful tweets for visiting Mandir.

Mahamana Madan Mohan Malaviya: The man who built an academic fortress around Hinduism