by Abhishek Kumar Singh
in History
2

Over a period of more than 1000 years of their forced rule in Indian territories, Islamists destroyed thousands of Mandirs and established their mosque on top of them. One of the most shining examples of the encroached mosques is ‘Adhai Din ka Jhopda’ in Ajmer, Rajasthan.

Marxist Distorians’ lies get exposed just by looking at the Jhopda

Like the story behind every other mosque and church standing in India, Marxist historians have also tried to paint the Jhopda as a ‘secular’ structure by calling it an amalgamation of Hindu, Muslim, and Jain structures.

However, a closer analysis of the structure of the Jhopda itself indicates that it has Hindu roots.

If you have ever traveled to the Jhopda, you must have seen its Minarets holding the huge structures. The sculpted images of humans on the Minarets’ structure are the reminiscence of Hindus’ Devis of the time. More than 70 such Minarets are there in the Jhopda. Each Minaret contains at least 20 such stone imprinting of Devis worshipped by Hindus.  According to Alexander Cunningham, director of the Archaeological Survey of India (ASI) during 1861-1865, these pillars were taken from 20-30 demolished Hindu Mandirs and implanted in the Jhopda.

The Dome’s structure is a representative of Hindus’ symbolism

Similarly, the interior of the dome of the Jhopda contradicts any historical evidence which claims that it is a mosque. The Dome of the structure is huge sculpting of Padma Yantra. It shows a lotus petal encircling buds of the flower. No such structure is ever been observed in any Islamic mosque in the world.

The Padma means Kamal (Lotus) in Hinduism. It represents humans’ lifecycle and signifies that no matter how low you are in life, you can re-emerge. Kamal is the chosen symbol because it is one of the purest flowers, but it can also emerge from a dirty place like mud. 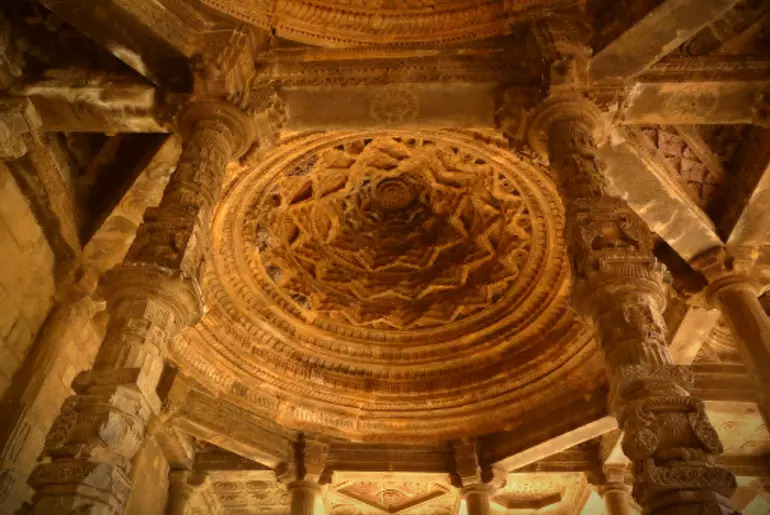 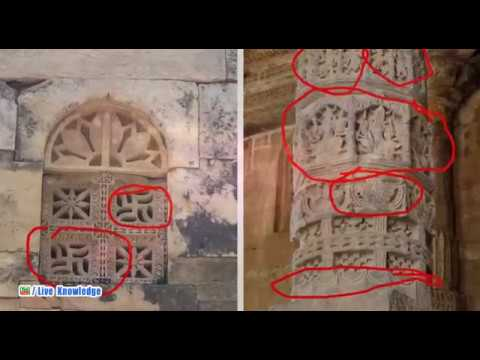 The stones and other materials used in the construction of Jhopda are also a relic of Hindus’ structure. These stones have Swastika implanted on it. The Swastika is the unique feature found only in Hindus’ symbolism and culture for thousands of years. In fact, the word Swastika has its origin in Sanskrit, our own indigenous language.

According to various accounts available in the public domain, the Jhopda was made by breaking various Mandirs and a huge school located in the vicinity of the Mandirs.

When Muhammad Gori was on his rampaging worst in India and had defeated Prithviraj Chouhan in battle, his next job was to establish Islam in India by constructing mosques. During his loot in 1192 AD, he witnessed the beauty of Mandirs and Schools in Ajmer. He then ordered his army chief Qutubbudin Aibak to construct the mosque by demolishing the pre-existing Hindu structures.

Due to the short deadline, Qutubuddin hired Hindu labourers to break the existing structures. However, it was not possible to construct the mosque within such a short span of time. So, he decided to not demolish an integral part of the structure and asked his labourers to make a slight change so that at least it is ready for offering Namaz.
Within 60 hours, the exploited Hindu labourers built an entire structure on the back of pillars of the Mandir and schools. The mosque is called Adhai Din Ka Jhopda because it was constructed in a total duration of two-and-half days. However, the final structure of the mosque was given in 1199 AD.

Colloquially, it is also believed that there are other reasons behind naming it as Adhai Din Ka Jhopda. According to the Sufis, the name Adhai (two-and-half) day signifies the morality of humans. It conveys that whosoever has been born will depart from the Earth within two and half days, that’s why the word ‘Adhai din ka’ is used before the Namaz site.

Like Babri Masjid, ‘Adhai Din ka Jhopda’ is also representative of the Stockholm syndrome of the Indian historians. When all evidence glaringly indicates that the place was once an integral part of our civilisational history, it is the stupidity of the highest order to allow people to offer their Namaz. The minor changes required in the structure should be made as soon as possible, and a grand Hindu Mandir or an institution imparting a traditional educational system should be established there.

The 3 farm laws aren’t going away, they are just changing shape