by Abhishek Kumar Singh
in Cinema
3

Recently, on the occasion of Vijayadashami, Shoojit Sircar‘s much-awaited film ‘Sardar Udham’ was released on Amazon Prime. The movie is based on Sardar Udham Singh, who assassinated Michael O’Dwyer, the former lieutenant governor of Punjab in India, who was responsible for the Jallianwala Bagh massacre. The main character in the movie is played by the actor Vicky Kaushal, who rose to fame following his lead role in ‘URI’.

Although the cinematography and acting skills of the movie are constantly praised by the critics, the Shoojit Sircar directed movie has lots of historical inaccuracies, which casts doubt on the intention of filmmakers. Apart from the excellent performance of Vicky Kaushal, it has some technical merits, which you cannot ignore. The way the Jallianwala Bagh massacre was portrayed, seeing it, one would be stunned. Apart from this, the cinematography of the movie will make you feel like you are living in that era of the 1920s. However, the movie has faltered in historical accuracies.

Udham Singh is shown absent at Jallianwala, which is factually wrong

The movie shows that Udham Singh arrived late at the infamous Jallianwala Bagh massacre as he was sleeping during the massacre. But the historical evidences contradict and falsify it. Sikandar Singh, who has written an elaborate book on ‘The trail of Udham Singh’ has made it clear in one of his research-based accounts that Sardar Udham Singh was already present at the massacre site with his friends from the orphanage. He further mentions that they were serving water to the large gathering which was present there on the day of Baisakhi. Udham Singh was one of the few survivors who were able to escape unharmed from the massacre site. 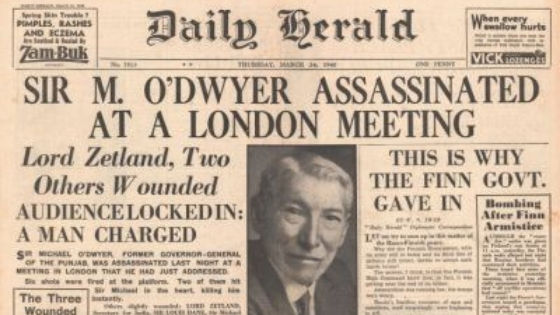 Moviemakers confused between HSRA and HRA

When depicting the meeting between Bhagat Singh and Udham Singh, the makers of the movie commit another historical blunder. While showcasing the camaraderie, the movie shows that the Hindustan Socialist Republican Association (HSRA) was already constituted in 1927, while HSRA was not constituted until 1928, when Udham was already in jail for illegal possession of firearms. Before 1928, HSRA was called HRA (Hindustan Republican army).

In another historical distortion, which seems to be intentional, the Ghadar party’s role in the evolution of Udham Singh as a major nationalistic revolutionary has been completely omitted from the movie. The movie seems a coveted tribute towards the communist movement in India, where it is shown that along with Udham Singh, communists played a major role in the development of the independence movement in India. There is no mention of how Udham Singh was serving the Ghadar Party abroad between 1920 and 1926, and how he was influenced by the ideas of Ram Prasad Bismil. Ghadar party being a centrist party, seems to be ‘not left enough to be given credit in the movie.

Apart from historical inaccuracies and omissions by the makers, the cameo of Bhagat Singh was played by Amol Parashar, an actor who has almost zero experience of playing such an impactful character. He looked more like a Hinglish speaking buffoon from JNU rather than the brave, fearless revolutionary from National College, Lahore, who was well versed in more than four languages. Indeed, an actor should not limit his creativity to one zoner, but a historical movie should not be an experimental lab to test someone’s acting ability.

The historical knowledge along with the seriousness of the movie makers can be gauzed from one of the promotional videos shot for the movie. The video shows Vicky Kaushal and producer Ronnie Lahiri participating in a quiz with kids. This is a history quiz to say, but the questions are asked in the same way as are dear to the Leftists – who wrote the Discovery of India, who was the author of the Constitution of India, etc. But their intentions came to light when it was asked which freedom fighters are addressed by the name of Lal Bal Pal. The children provided the correct answer for Baal and Pal, but when it came to the word ‘Lal’, it referred to Lal Bahadur Shastri. Instead of correcting their mistake Vicky Kaushal and Ronnie Lahiri just moved on with the quiz, insinuating that they had answered correctly.

The movie seems to be good and great to watch from its trailer. However, if someone wants to view the full and accurate portrayal of history, they should not be watching the movie with that intent in mind. Although Shoojit Sircar called it his dream project, historical inaccuracies robbed the movie of being about anything dreamy at all.