After gifting the entire planet with a deadly pandemic that has killed over three million, the Chinese Communist Party (CCP) is gearing up with fervour to celebrate its centennial anniversary. Joining the celebration is India’s national daily The Hindu which yesterday (July 1) carried a full-page, propaganda ad of the party.

Do the biz side of papers realize they undermine their reporting side w this stuff? pic.twitter.com/no3JinqWIi

The paid ad on behalf of the CCP appeared on the third page of the newspaper and rather interestingly, was published in such a manner that for a rookie it would be difficult to differentiate between a generic report and a paid ad.

Sensing the furore amongst the public regarding the ad, the Hindu group chairperson Malini Parthasarathy gave a weak counter for publishing the ad which made the matters worse as netizens brutally trolled her.

“With the header clearly specifying the material is an advertisement, there’s no pressure from the routine nature of the transactional aspect on the paper’s capacity for objective reporting on China, which in fact happens. We do carry critical pieces on China’s aggrandisement.” tweeted Malini.

With the header clearly specifying the material is an advertisement, there’s no pressure from the routine nature of the transactional aspect on the paper’s capacity for objective reporting on China, which in fact happens. We do carry critical pieces on China’s aggrandisement. https://t.co/9DdzuhXfZH

While Malini claimed that her publication wrote pieces on China, a customary look at the Hindu’s previous two days op-eds doesn’t really reflect the same sentiment. Full-length articles that cajole the CCP and its achievements over the last 100 years while whitewashing the unspeakable atrocities it undertakes have been published unashamedly by the Hindu. 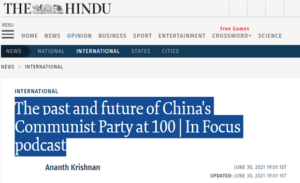 However, this is not the first time that Hindu has found itself in hot waters for such behaviour. As reported by TFI, last year in October, in the aftermath of Galwan valley clash where 20 Indian soldiers sacrificed their lives for the country, a money-hungry Hindu carried a similar full-page advertisement.

The said ad caught the attention of almost everyone as being a grossly insensitive publication at a time when the Indian Army was locked in a tense military standoff with China. That the Hindu had no qualms about publishing it spoke volumes about how low certain Indian publications could fall for a few biscuit crumbs thrown towards them.

CCP spends billions of dollars on overseas propaganda. Some newspapers help lubricate CCP's propaganda mill by publishing its full-page ads, without clearly marking them as ads. Any ad deceptively looks like the newspaper's own full-page coverage on China (as in The Hindu today). pic.twitter.com/vfTtJ55Mv0

Read More: Why The Hindu newspaper should consider renaming itself to “The Han Chinese”

Reported by TFI, the Hindu, championed by the liberals and pro-China lovers alike had toed CCP’s line by publishing fake news where it claimed that PLA troops had occupied the finger 2 and finger 3 regions on the north bank of Pangong Tso lake whilst quoting a former BJP MP Thupstan Chhewang.

As soon as the controversial report of The Hindu came out, the army and the government institutions were quick to denounce the news and termed it as a piece of fake news and a figment of imagination by the esteemed newspaper. The Government’s official fact-checking arm PIB tweeted a screenshot of the report and informed that it is fake news and that the Indian Army has refuted the statement.

.@the_hindu citing a claim, has published that Chinese troops have further transgressed into Indian territory and occupied positions in Finger 2 and 3 of the north bank of #PangongTso Lake.#PIBFactCheck: It is a #Fake news. @adgpi has refuted this statement. pic.twitter.com/PvNjUQRCt4

More recently, in May earlier this year, the publication once again tried to create a fake narrative about an Indo-China flare-up in Galwan. A report titled “Minor face-off with Chinese troops in Galwan Valley” was published by the national daily on May 23, quoting anonymous government sources whilst claiming that a face-off between the Indian and Chinese troops took place this month in the no-patrolling zone at Eastern Ladakh’s Galwan Valley.

However, the Indian Army quickly jumped in before the liberals could use the fake news story to create an environment of paranoia and psychosis. “It is clarified that NO such minor face-off has taken place between Indian and Chinese troops at Galwan Valley in Eastern Ladakh in the first week of May 2021 as reported. The article seems to be inspired by sources who may be trying to derail the ongoing process for early resolution of issues in Eastern Ladakh.” the Army said in a statement.

An article titled "Minor face-off with Chinese troops in Galwan Valley" published in The Hindu on 23 May 2021 has been taken note of. (1/4) pic.twitter.com/kBP5K3fvJW

Employed on the payrolls of Chinese masters, the national daily has a habit of routinely churning out such news reports. The full-page advertisements and the money that comes with them is merely the favour being returned by the CCP.

However, as TFI had prophesized last time — it is not the last instance that the Hindu is publishing an untrue story or such distasteful ad without following the basic tenets of journalism viz. integrity and truth. Expect more such vendetta driven pieces in the future as well.

27,700 complaints, 59,350 posts removed: How Google performed in its first month under IT rules